Brock alumnus shares how he found purpose by erasing hate 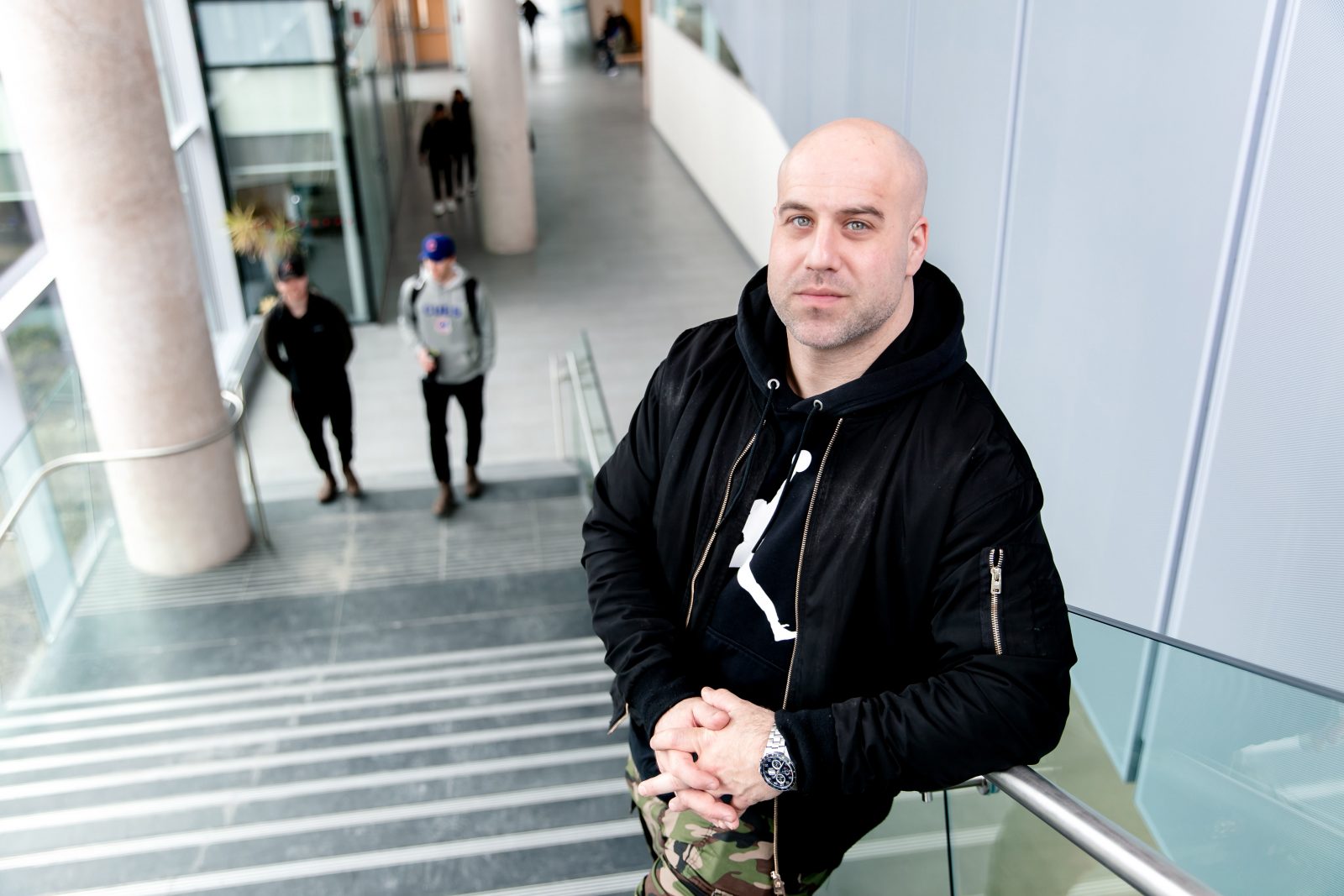 Rather than succumb to his weaknesses, Corey Fleischer (BA ’06) harnessed and used them to create change in the world.

In hopes of inspiring others to do the same, the Brock alumnus returned to campus on Tuesday, March 19 to share his story.

In a room full of Brock students, alumni, staff, faculty and community members, Fleischer gave an impassioned talk about how he overcame the barriers of his learning disability and dread of an uncertain future through the discovery of his life’s mission: erasing hate. 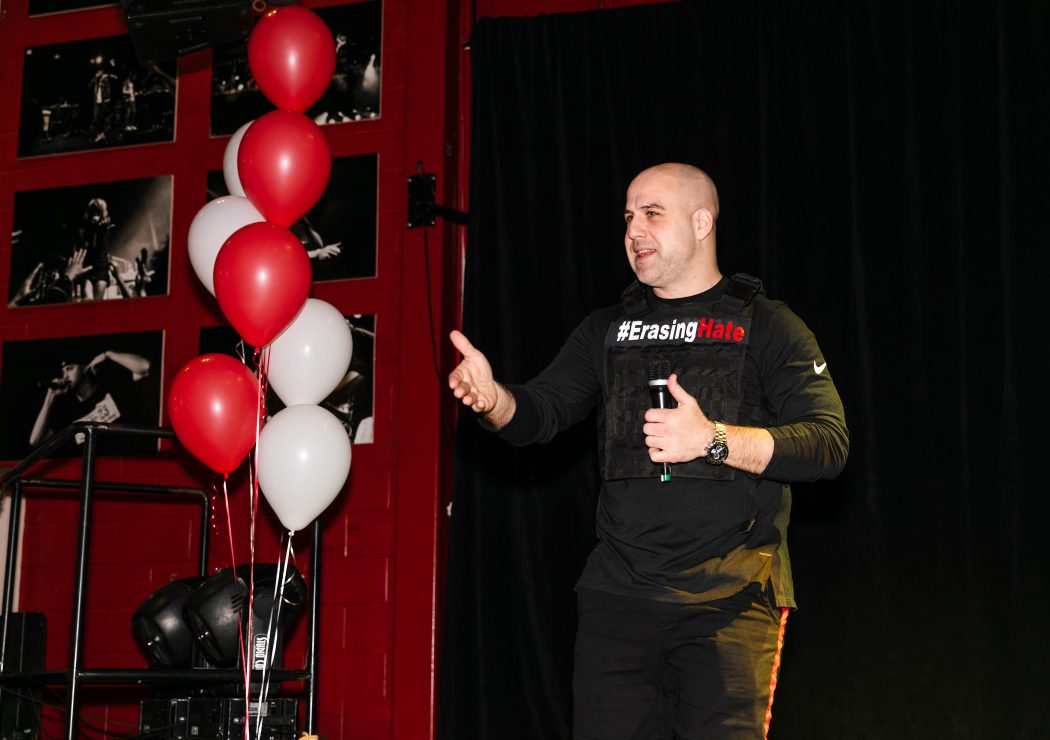 Founder and President of #ErasingHate Corey Fleischer (BA ’06) shared how his journey from Brock University led to the creation of the worldwide movement that targets and eliminates hate graffiti for free.

The founder of the global #ErasingHate movement, which sees hate graffiti around the world removed for free, was honoured with the Brock University Alumni Association’s (BUAA) Community Engagement Award at the event.

Growing up in Montreal, Fleischer said he struggled for many years to maintain his grades because the education system was ill-equipped to support him and his learning disability. It was not until he attended a prep school in Maine on a hockey scholarship that he “learned how to learn,” transforming his disability into one of his biggest strengths.

“My greatest problems with my learning were realistically my greatest attributes. I had to learn things differently than other people,” said Fleischer. “This process helped me to think outside the box. It’s not so much about what you’re learning, but how you learn it.”

With the help of various campus services and the compassionate guidance of Brock Learning Disabilities Program Co-ordinator Dianne Jansen (MEd ’10), Fleischer discovered his passion for Women’s Studies at the University and graduated in 2010.

After Convocation, Fleischer returned to Montreal, where he started his own power-washing company. While he was able to make a living off his successful business, Fleischer felt like his life was missing substance.

That changed the day he encountered a swastika spray painted in a public space.

Although he initially ignored to the urge to remove the hate symbol, it didn’t take him long to realize this was a task he needed to take on.

In the 15 seconds it took for him to clean the vandalized intersection, he found the feeling he had been searching for his whole life. 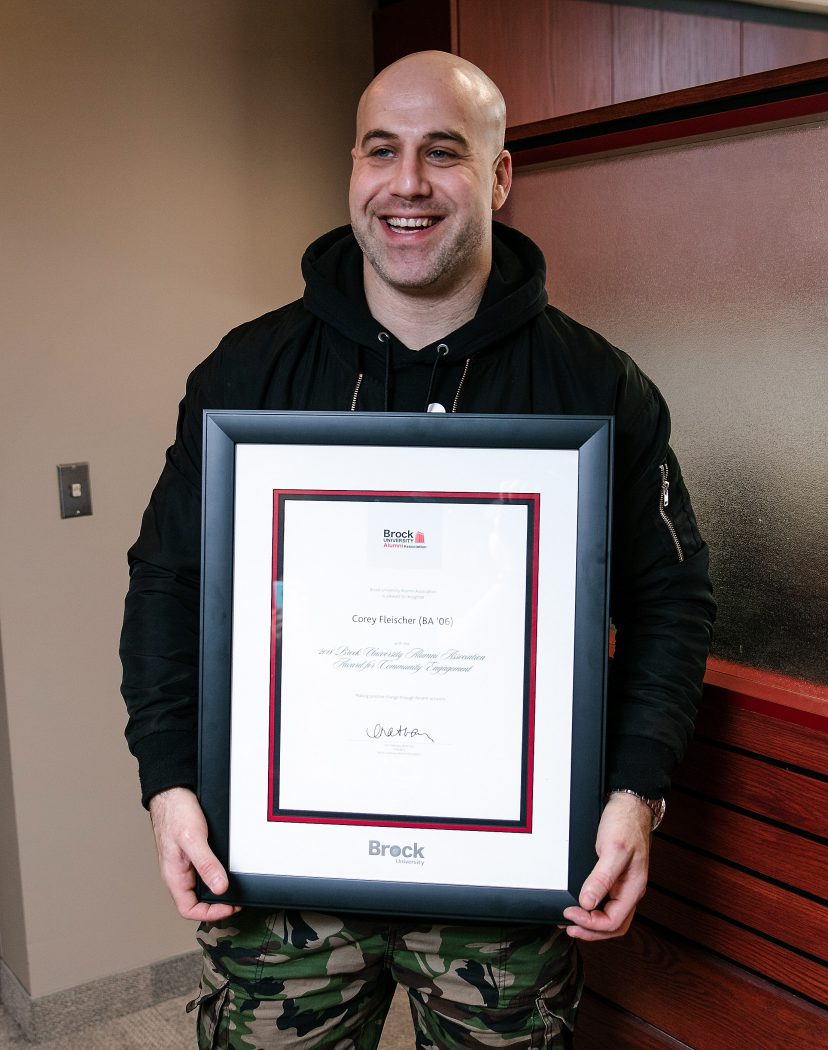 After his first removal of hate graffiti, Fleischer spent five years privately scouring the streets of Montreal looking for disparaging graffiti he could remove in his spare time. Then, in response to an upsurge in incidences, Fleischer shared photos of his erasures on Facebook. What he did not anticipate was the viral response and flood of media requests that followed, turning his once private act of volunteerism into a public, global movement.

“What we’re seeing is social change taking place through social media,” he said.

“A lot of people think you need unattainable things to make a difference, like millions of dollars or complicated algorithms, but you don’t. The difference between me and everyone else in this room is I have a power-washer, water, a phone and the drive to make a difference … All it takes is one person to say, ‘I’m not taking this anymore’ and you’d be surprised how quickly things can change.”

When Fleischer left Brock and stopped playing hockey, his role as protector of his teammates disappeared along with it. Since founding the #ErasingHate movement, Fleischer says he has a new team, only it is much bigger now.

“Erasing Hate was built on helping your neighbours. It’s about inspiring people to step up when something is wrong and to do something about it.”

Fleischer’s quest to make a difference around the world made him an obvious choice for the BUAA’s Community Engagement Award, which recognizes a Brock graduate who has made outstanding contributions to their community and in doing so, has enriched the lives of others.

“Corey was a natural fit as this year’s recipient,” says Jayne Morrish (MA ’12), Chair, BUAA Recognition of Excellence Committee. “Corey embodies this award’s vision every day, but on a global scale.

“He has dedicated his life to making the world a kinder, friendlier and more accepting place, while also spreading the message that youth can overcome any challenges that come their way. This, coupled with his passion for authentic engagement, made Corey the ideal candidate for the Community Engagement award, and I am so proud to count him among my fellow alumni.”