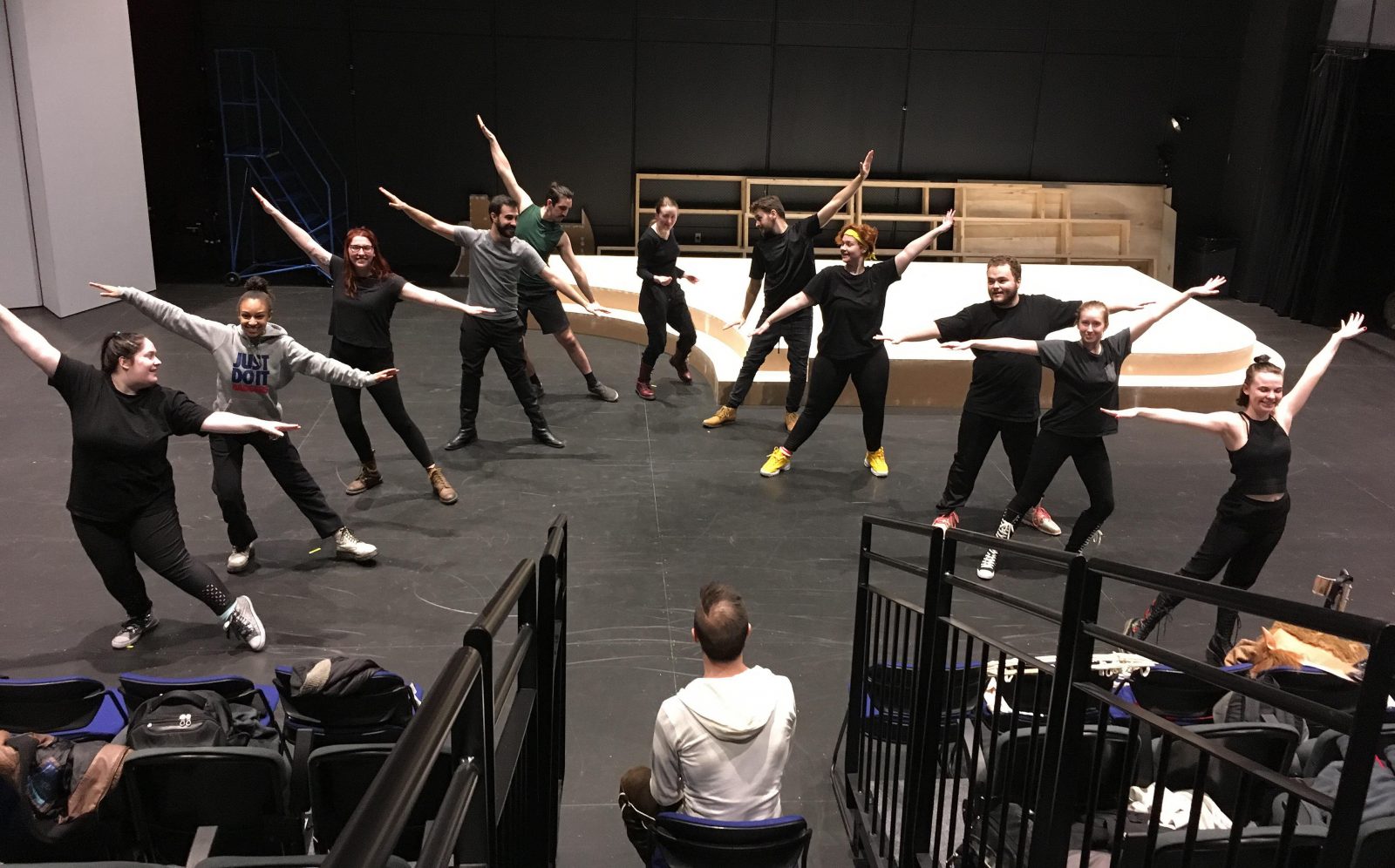 Cast and crew members of the upcoming mainstage production King Ubu have been busy preparing for opening night on Friday, March 1. Tickets are on sale now for the production, presented by Brock University’s Department of Dramatic Arts.

Presented by Brock’s Department of Dramatic Arts (DART), the show is an avant-garde and hilarious commentary on human folly and the dangers of unchecked political ambition.

Director and Associate Professor David Fancy said Ubu’s references to populism and the blurred lines between celebrity culture and politics are fitting themes for our current climate. Although first performed in 19th century France, King Ubu, he added, offers “an invitation to look critically at, but not disengage with, the current moment in time.”

The play centres on Ma and Pa Ubu’s bloodthirsty quest to become the new king and queen of a fictionalized version of Poland.

Between their continuous bickering, Pa, an egotistical and inept tyrant who wields an enormous toilet brush while speaking nonsense, and Ma, his enabling and devious wife, scheme to take over the world through a series of antics that play out like a reality show gone wrong.

To emphasize the theatrical nature of Ma and Pa Ubu’s political exploits, the show features puppets, karaoke numbers and a giant puppet head that eats half the cast.

Although the production stays true to the absurdist spirit of Jarry’s original work, Fancy said there is also a layer of introspection that exists beneath all the silliness.

“On one side we’re being playful, irreverent and sarcastic like Jarry, but on the other side there are also lots of heartfelt moments,” he said. “We can use laughter on some level to celebrate, criticize and escape, but we will also be forced to confront the fact that these are real people having difficult experiences. We question what caused them to become such trainwrecks — and whether we need to have compassion for these people who are perhaps not so different from us.”

“Ubu admonishes supremacy logic in all of its forms and casting a woman as Ubu helps heighten the critique of patriarchy. At the same time, this casting points out that anyone, given the right context, can engage in human folly,” Fancy said of the distribution of roles across genders. “Everybody can behave like a dangerous fool.”

All these aspects of the production, combined with intense and moving performances, make for an entertaining experience, he added.

“I think a big part of it is tapping into the creative possibility of what theatre can be as an art form,” Fancy said. “The experience gives our cast and crew the creative confidence to respond to the world around them, like Jarry did, using their own, creative voices.”

King Ubu is translated by David Edney and directed by David Fancy, with costume design by Jo Pacinda and scenography by James McCoy.

Tickets for the show are $18 for adults and $15 for students and seniors. A group rate is also available. Tickets are available through the FirstOntario Performing Arts Centre box office at 905-688-0722 or on the PAC website.