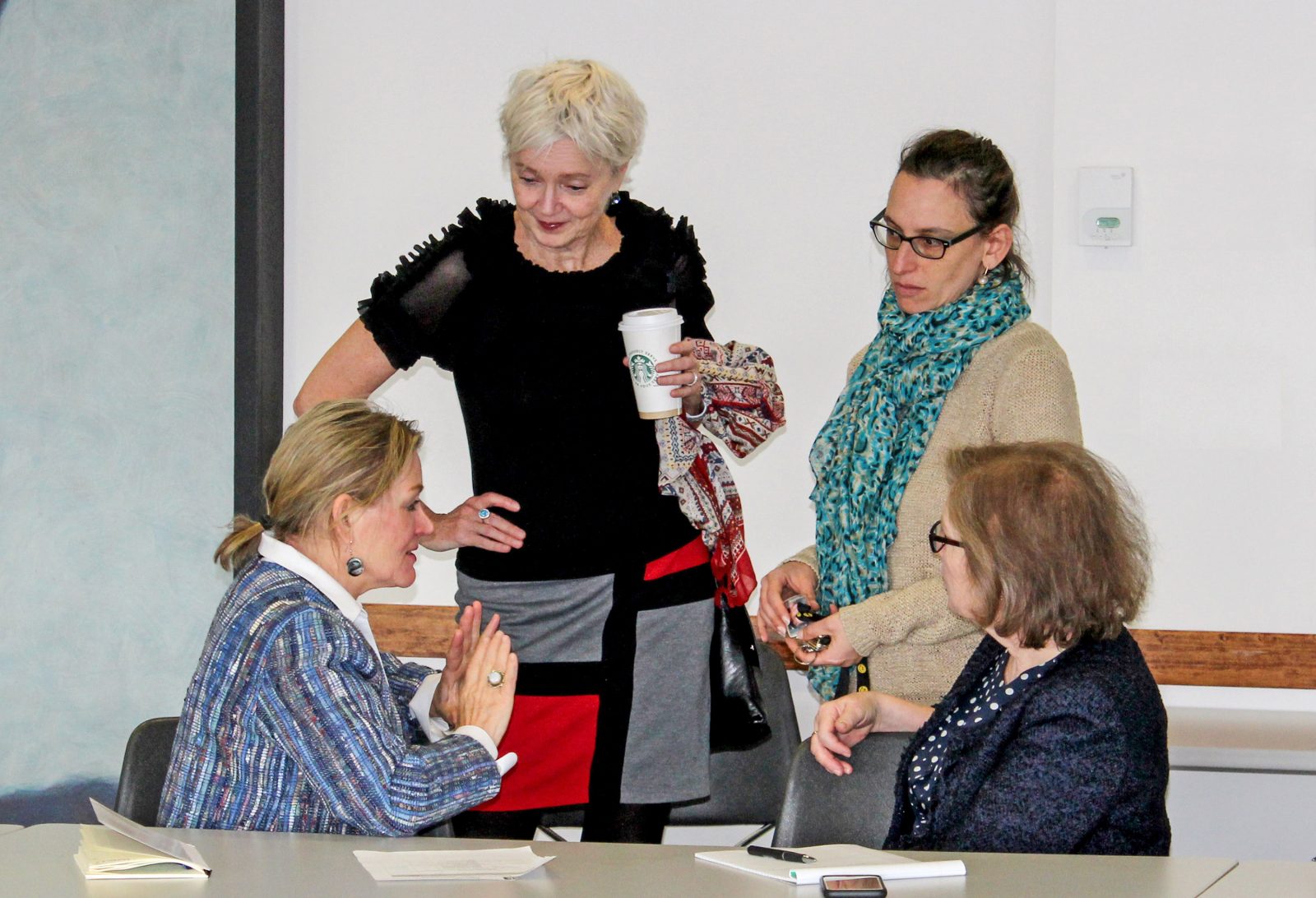 Ingrid Makus, Dean of Social Sciences, speaks with Cheryl McCormick, Professor of Psychology, Neta Gordon, Associate Dean of Student Affairs and Curriculum in the Faculty of Humanities, and Diane Dupont, former Associate Dean Research and Graduate Studies in FOSS and current Interim Dean, Graduate Studies, at the November meeting of Women in Leadership.

Women at Brock want to build one another up, and have created an initiative in support of the cause.

Women in Leadership (WIL), formed by a group of strong Brock females, is intended to encourage women at Brock to take on leadership roles at the University and beyond.

Following their attendance at last year’s annual conference of Senior Women Academic Administrators of Canada (SWAAC), several women from Brock decided to look at ways to maintain the excitement of the conference throughout the year on the University’s campus, while also cultivating a strong cohort of Brock women leaders to attend SWAAC in April 2019.

An early step in the journey was a panel discussion delivered at last summer’s Niagara Leadership Summit (NLS) by Ingrid Makus, Dean of the Faculty of Social Sciences (FOSS), Diane Dupont, former Associate Dean Research and Graduate Studies in FOSS and current Interim Dean, Graduate Studies, and Angela Book, Associate Dean of Undergraduate Studies in FOSS. In their session, A Conversation with Brock Administrators, the three women interviewed one another, described their roles and worked to dispel some deeply held assumptions.

“There are myths out there about the significance of administrative roles for women. People don’t understand what senior administration means,” says Dupont. “We contribute to the goals of the University.”

Turning their attention to their University colleagues, the women started WIL to continue the momentum of the SWAAC conference and the NLS panel.

The group intends to meet monthly to tackle different topics.

About 30 women attended the first meeting in November to discuss the current situation for women in leadership roles at Brock, to consider ways to support women in both formal and informal leadership positions, and to encourage the next generation of potential women leaders.

“We want to build a trusted network of mentors,” says Dupont of the initiative’s goal. “Leadership is all about human relations.”

Book notes the importance of collaboration in effective leadership.

“I can’t imagine doing this alone,” she says.

Beyond the initial goal of fostering a Brock contingent at SWAAC, WIL organizers are looking at how to further structural support to mentor upcoming female leaders in the University, possibly building on a pilot program currently underway.

The increasing number of women in politics and academia may seem encouraging but some striking disparities persist, says Makus.

“It’s true there are more women in tenure track positions in post-secondary institutions,” she says “but, the higher you go, the fewer women you see in positions of formal leadership.”

Even within positions of leadership in administration, there are significant salary discrepancies between women and men, Makus says.

“There is still a lot of work to be done.”

According to Dupont, women’s roles are traditionally seen as emotional labour and caregiving, which don’t generally come with prestigious titles or remuneration.

“The definition of leadership is not tied to a formal position,” says Dupont. Leadership is happening quietly throughout the University, she says, but often the leadership provided by women is informal.

In recognition of the diversity of work done by women in the University, WIL has expanded beyond those with formal leadership titles.

Monthly meetings are open to the entire Brock community. The initiative aims to recognize leadership wherever it is found within the University and to build a support network among women leaders at Brock.

Makus is confident that the initiative will yield a strong cohort of Brock women leaders to attend the 2019 SWAAC conference in Waterloo. Meanwhile, she says, conference organizers are watching what’s happening at Brock with interest.

The next meeting of WIL is scheduled from noon to 1 p.m. on Thursday, Feb. 28, in GSB 408. Faculty, staff and students are all welcome to attend. Additional information, including dates and locations of upcoming meetings, is posted on the Women in Leadership web page.