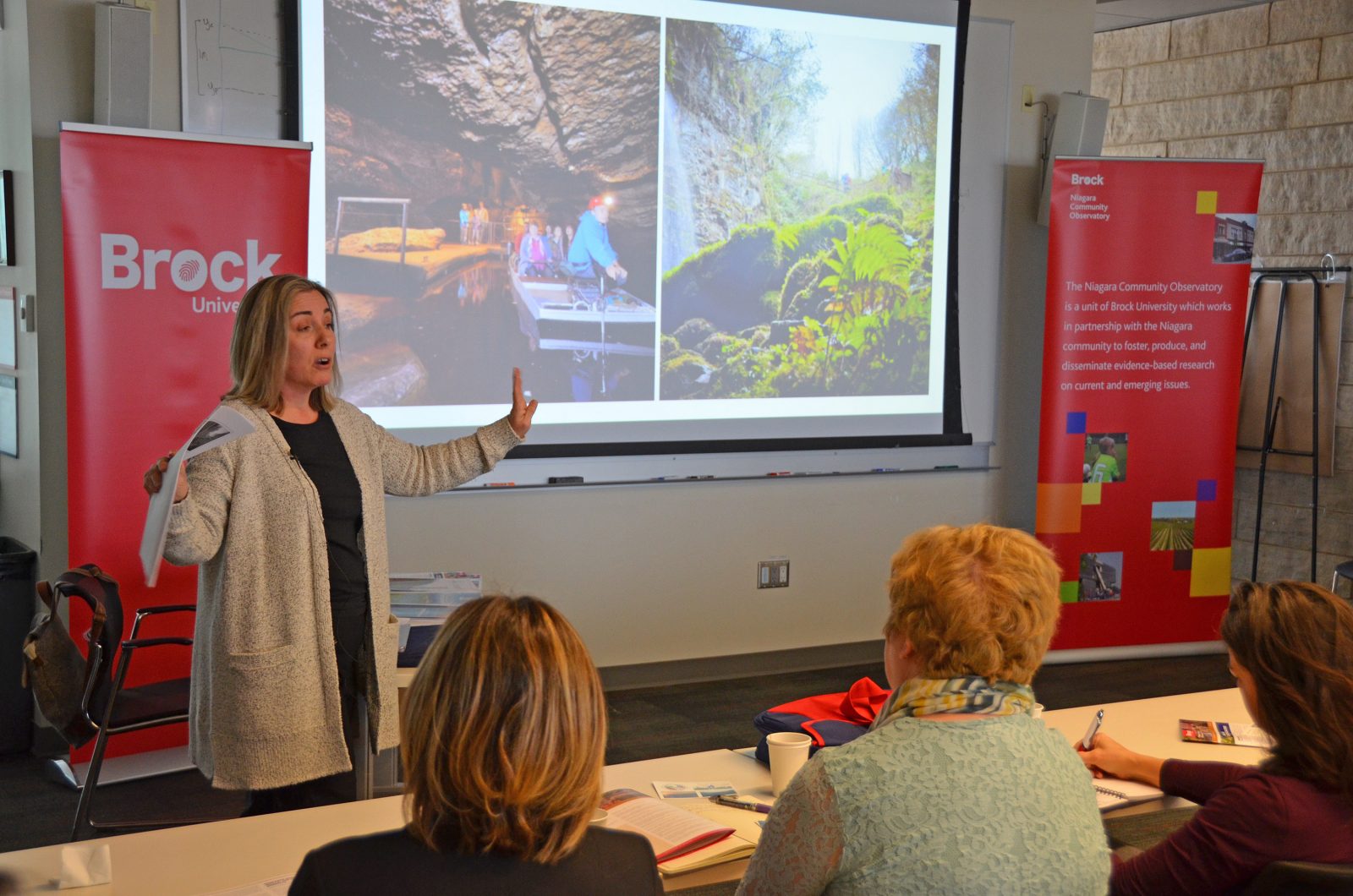 Carol Phillips, Research Co-ordinator with the Niagara Community Observatory, presents a brief she wrote about the possibility of Niagara becoming a UNESCO Global Geopark.

With the mighty cataracts, vineyards producing critically acclaimed wines and vast networks of bicycle paths, tourists coming to Niagara have many options of what to see and experience. There’s also a world of rocks, canyons, waterfalls and other land features that even many locals don’t know about.

Niagara’s unique, rich geology — and the economic and cultural activities connected to these features — might be better known if the region was to become a UNESCO Global Geopark, says new research from Brock University’s Niagara Community Observatory (NCO).

“Being designated a UNESCO Global Geopark allows Niagara to brand itself internationally as a destination for geotourism,” says Carol Phillips, author of the NCO policy brief Ohnia:kara: An Aspiring Global Geopark.

“Niagara has a fascinating Earth history that has created so many beautiful sites, culminating in Niagara Falls,” says Phillips. “And this brand allows us to showcase those sites as well as the history and culture that has developed around them.”

The United Nations Educational, Scientific and Cultural Organization (UNESCO) describes a Global Geopark as being a “single, unified geographical area where sites and landscapes of international geological significance are managed with a holistic concept of protection, education and sustainable development.”

Spearheading efforts for Niagara to become a UNESCO Global Geopark is the geographic educational non-profit group called Geospatial Niagara. The NCO policy brief says the group has identified more than 78 geosites in the region that are of geological, environmental or cultural interest.

These include the Welland Canal, the Wainfleet Bog, Beamer Falls, Balls Falls, the Mewinzha Archaeology Gallery in Fort Erie and historical sites from the War of 1812, among others.

The NCO policy brief says, under a geopark system, Niagara Falls would still remain the major draw for visitors to the area. But the tourism industry could be expanded by creating a niche for geotourists interested in seeing Earth history and the historical and cultural sites that have evolved from these unique and significant land features.

The brief notes that the Niagara Escarpment, on which Brock University sits, has been a UNESCO World Biosphere Reserve since 1990. A geopark designation with infrastructure such as visitor centres and plaques with QR codes “can help the Biosphere Reserve tell its story by guiding people to lesser known geosites as the escarpment winds to its greatest asset, Niagara Falls,” says the brief.

Darren Platakis, Executive Director of Geospatial Niagara, says another big advantage of Niagara being designated a UNESCO Global Geopark is that it could provide a strong educational component for Niagara students from kindergarten to Grade 12.

“A Geopark will provide opportunities for students to not only learn and begin to understand our geology and how it is so interdependent with our environment, culture and history, but they can also gain a deeper understanding and appreciation of the 12,000 years of Indigenous history in Niagara,” says Platakis.

“This Indigenous history is an extremely important element to the overall development of the application and programming for the Geopark,” he says. “Students, local residents and tourists will see Niagara with a new set of eyes.”

Platakis says the designation could also attract researchers and students to the area, with programs and services connecting into a wide range of studies at Brock and Niagara College.

Geospatial Niagara submitted an expression of interest to the Canadian National Committee for Geoparks and is in the process of applying to UNESCO to become a Global Geopark.

The NCO’s policy brief looks at the costs and benefits of geoparks in China, the United Kingdom and France and concludes that a UNESCO Global Geopark designation could benefit all 12 municipalities in Niagara.

“This policy brief encourages all levels of government and sectors of society in Niagara to consider the benefits of a UNESCO Global Geopark and how they may each play a part to make it a reality,” says NCO Director Charles Conteh.

“The vision behind the Global Geopark initiative in Niagara is closely aligned with the sociocultural and economic advancement of the region,” he says. “Leveraging and promoting this initiative should be a fundamentally community-driven effort if it is to be sustainable.”

The NCO brief lays out a number of “next steps” in making the UNESCO Global Geopark a reality in Niagara, emphasizing that it will take a broad community effort across the environment, education and tourism sectors.