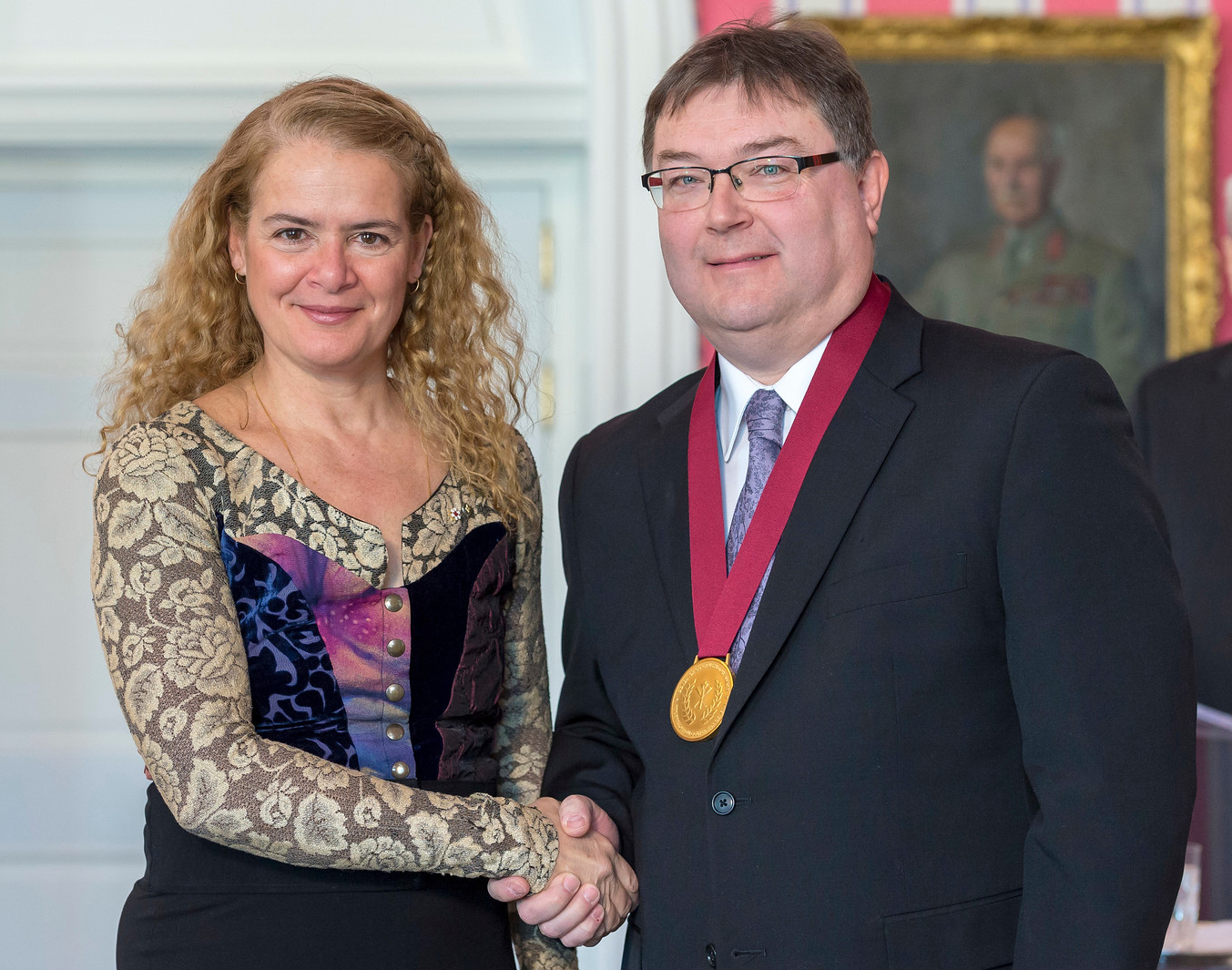 Paul Paterson (BA ’90, BEd ’05) received the Governor General’s Award for Excellence in Teaching from the Right Honorable Julie Payette, Canada's 29th Governor General, in a ceremony at Rideau Hall on Jan. 28. Paterson was recognized for his innovative Grade 10 history course at Westmount Secondary School in Hamilton.

Paul Paterson (BA ’90, BEd ’05) aims to not only teach his students about history, but also to inspire and empower them to make history themselves.

The award was presented by the Right Honorable Julie Payette, Canada’s 29th Governor General, in a ceremony at Rideau Hall on Jan. 28.

Paterson’s classroom techniques have been influenced by his time at Brock, where he first studied History and Political Science, and then participated in the University’s former Enterprise Education program.

“The Brock seminar experience was really good for developing quick thinking,” says the history and world politics teacher. “Critical thinking skills are key: the ability to think on my feet, understand complex issues and debate them.”

During his University days, Paterson learned how to bring an entrepreneurial mindset into the classroom: looking for opportunities to try something new, developing a clear focus and plan, and having the courage and conviction to make his ideas real.

And years later, during the Canada 150 celebrations, Paterson applied that knowledge as he created his award-winning approach to teaching history.

“I had a nagging malaise about the whole Canada 150 thing,” he says. “My problem was we were celebrating things we did 150 years ago, but not thinking a lot about what we do now, our next big thing.”

Paterson challenged his Grade 10 students to think about what Canada 200 might look like and what actions they could take to bring that vision to fruition.

Students chose to explore several areas of interest, including the environment and Indigenous and minority issues.

They identified challenges and opportunities, wrote up timelines and policy proposals, and developed action plans for their ideas.

The final step had students send their proposals to people who could potentially aid in their approval, such as politicians, lobbyists and bureaucrats, to request feedback on the documents.

“Students routinely got answers back from all sorts of people, including premiers and ministers,” says Paterson. “The kids got excited because somebody listened and took time to respond.”

In the process, students learned the power of persuasive writing and realized that their ideas have merit.

For Paterson, studying history is about being able to dismantle complex issues and reassemble them, a skill that is necessary in every organization.

“In the last decade, there’s been a real emphasis in education and society on STEM (science, technology, engineering and math) as the most important sectors to explore,” says Paterson. “We’re finding students saying they’re taking history because they’re not smart enough for math and science. What we do in history and social science and humanities in general is every bit as important. You have to be just as smart, just in a different way.

“We should not ever marginalize any avenue of study,” he adds. “It’s only through integrative approaches that we can solve problems.”