From Germany to Canada: Students connect in Brock lab 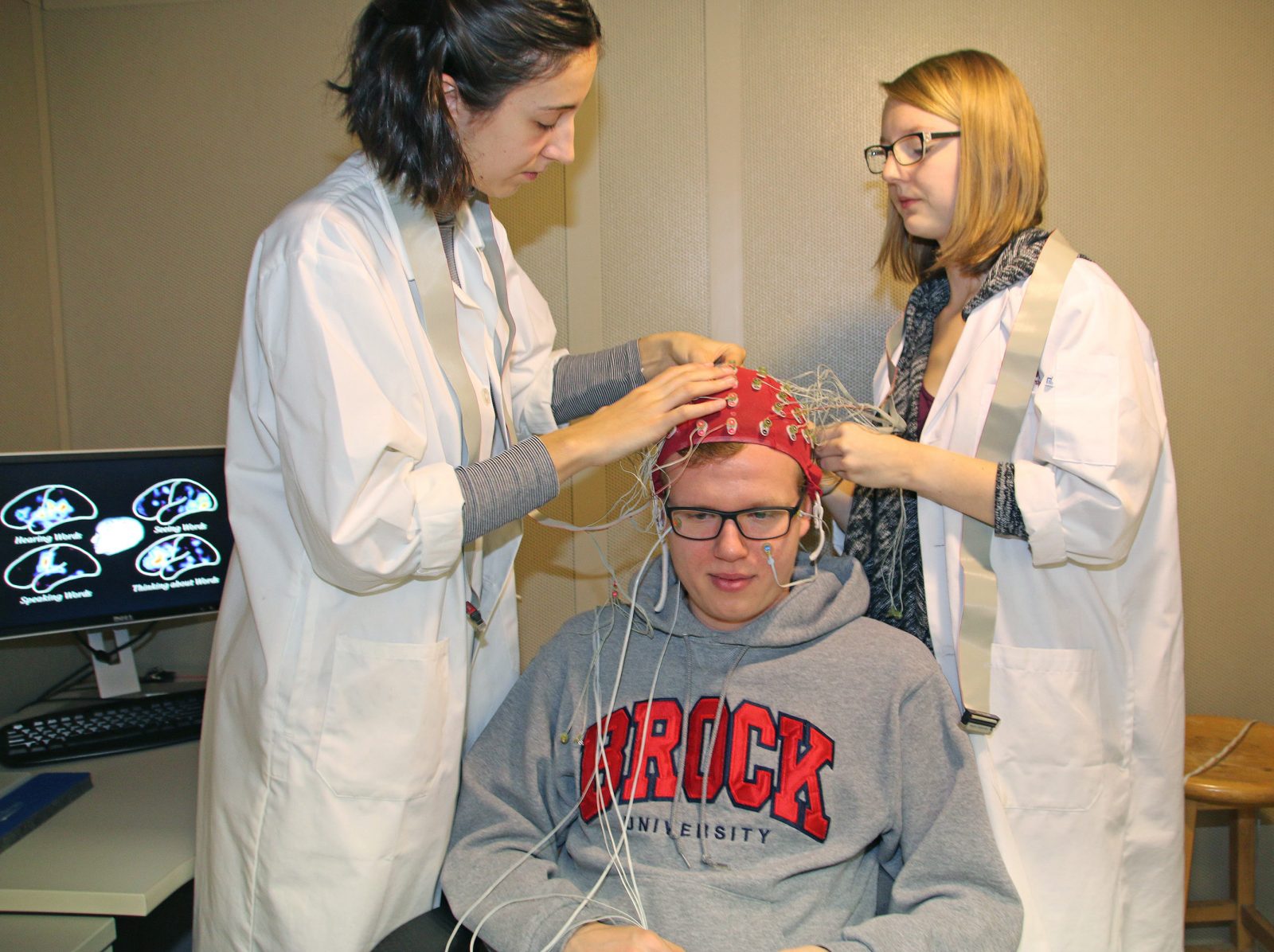 Although they were from the same German city, they began their educational journey as strangers.

But their similar interest in Psychology soon found Joana Frieske and Amelie Backes working together in the same Brock University lab, pursuing their passion thousands of miles from home.

Despite sharing a hometown, the pair hadn’t met until their studies at Maastricht University in the Netherlands. They later discovered that, coincidentally, both had planned to pursue an honours thesis abroad, had decided to go to Canada and had selected Brock University, each drawn by the offer to work with Veena Dwivedi, Associate Professor of Psychology and Neuroscience.

Dwivedi was initially hesitant to accept exchange students for the fall term, knowing that she would be busy writing a grant application. But after a couple of Skype conversations with their supervisor, Dwivedi had a feeling that Backes and Frieske would work out — and their actions since have proven her right.

“They were ‘plug and play’ students,” she says. “They came ready to learn.”

“Having Amelie and Joana take my course, Brain and Language (PSYC 3P65), and work on research in the lab at the same time was a pedagogically sound thing to do,” says Dwivedi. “They learned a lot in a short amount of time. “

The students agree. “It’s crazy how much we’ve learned in less than four months, not only about research practice but also the linguistic background and theory behind it,” says Backes.

“We took the Brain and Language course, which was perfect for us to combine what we learned and then apply it in the lab,” adds Frieske.

In the Dwivedi Brain and Language Lab, Backes and Frieske worked on Dwivedi’s ongoing collaborative project with MIT Professor Ted Gibson that examines the use of Bayesian statistical models to account for people’s understanding of sentences.

“It’s a high-level collaboration and I thought it would be a great opportunity for the students,” Dwivedi says. The international experience will look great on the students’ CVs, too.

The project fits well with Dwivedi’s own research into how people use context and grammar in sentence comprehension.

“What we did in the lab was a unique experience. We could maybe do similar work (at home), but this was very special,” says Frieske.

Dwivedi called it “thoroughly satisfying as a professor in the classroom and a scientist in the lab, to see students grow and learn.

“It is amazing how much progress these motivated and bright students made in just one semester.”

Dwivedi’s commitment to sharing knowledge is evident throughout her lab.

“We’re in it together. We share what we know. We help each other out,” she says. “We’re all so lucky to have these opportunities. And there’s joy in recognizing and sharing that.”

The students both say that Sean Chisholm, a research assistant in Dwivedi’s lab studying Psychology and Business, was instrumental in their success at Brock.

“We asked Sean a lot of questions,” says Backes. “He was our first person to talk to about procedural things like how exams work at Brock, how midterms work and how to submit assignments.”

When she was exploring potential study abroad opportunities, Frieske, who had never before ventured outside Europe, had to realign her thinking.

“As soon as I saw that it was possible to go to Canada, I was really happy to have this opportunity,” she says.

After looking into Canadian universities on the west and east coasts, Backes decided on Brock, which offered “a lot of interesting courses to choose from,” she says.

It was the University’s course selection, particularly in Psychology, that also solidified Frieske’s choice.

The German students are glad they ventured to Canada to study at Brock.

Their advice to other students who are considering studying abroad: “Definitely do it.”

Frieske and Backes are in the process of deciding where to pursue master’s degrees. Inspired by their positive experiences at Brock, both are considering international opportunities.