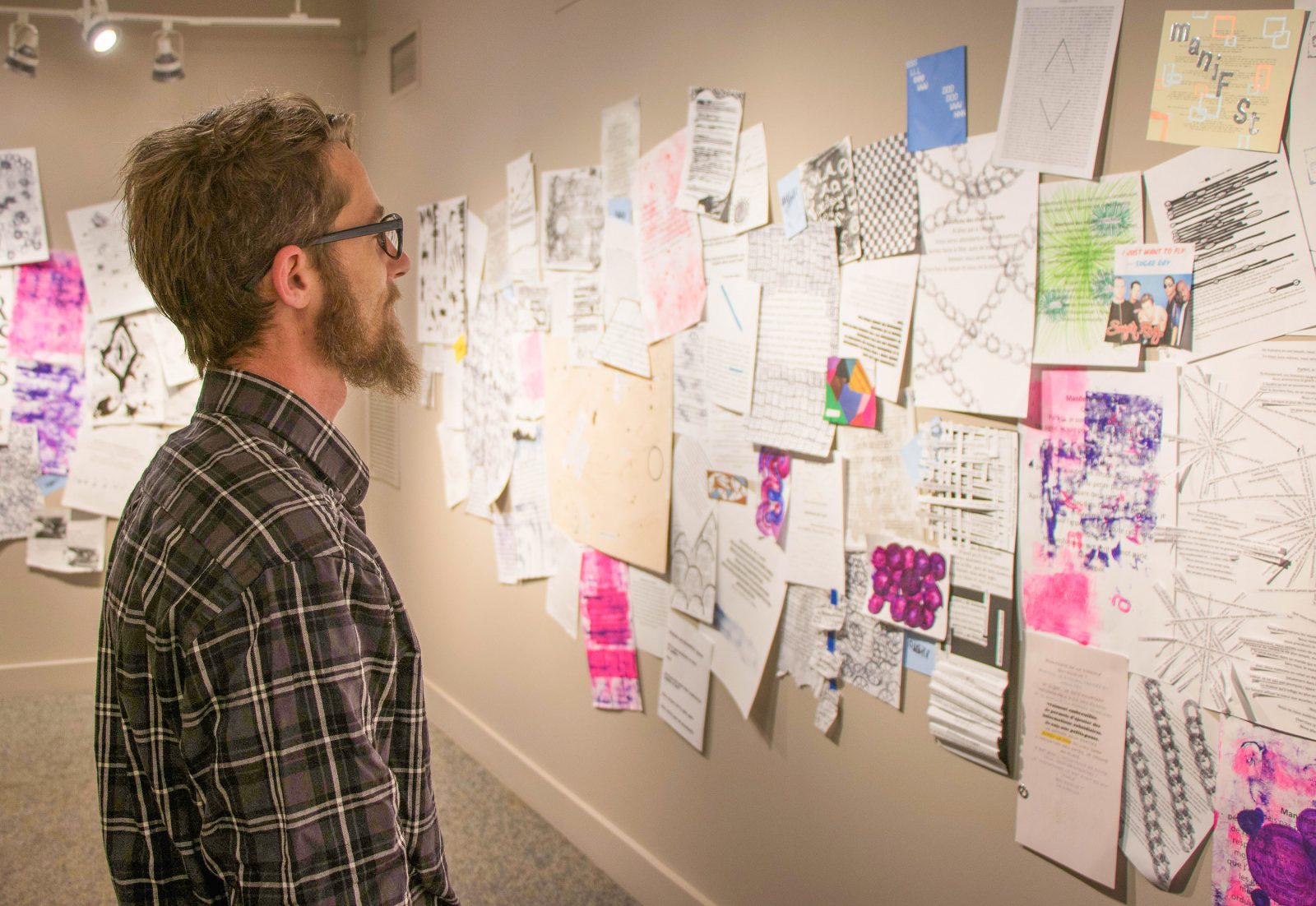 Curt Richard, a student in VISA 3M90, surveys the exhibition that he and 52 other students have completed over the course of the semester. Manifestos in a Room is a collaboration between students in French, Visual Arts, and Studies in Art and Culture. It will be on display at Rodman Hall Art Centre until Dec. 30.

Manifestos in a Room and Sauti za Afrika/African Voices/Voix Africaines were each created to engage with Northern Oracle, an exhibition by Heather Hart currently being featured at Rodman Hall Art Centre.

Through the exhibition, which includes an indoor rooftop installation, Hart asks visitors what they want to say to the world and advises them to should it from the rooftop.

Reflecting on Northern Oracle, 53 students in Visual Arts, Studies in Arts and Culture, and French came together to create their own statements, whether poetic, absurd or political. The expressions — in both English and French — were used to create Manifestos in a Room, on display in Rodman Hall’s Studio Gallery. 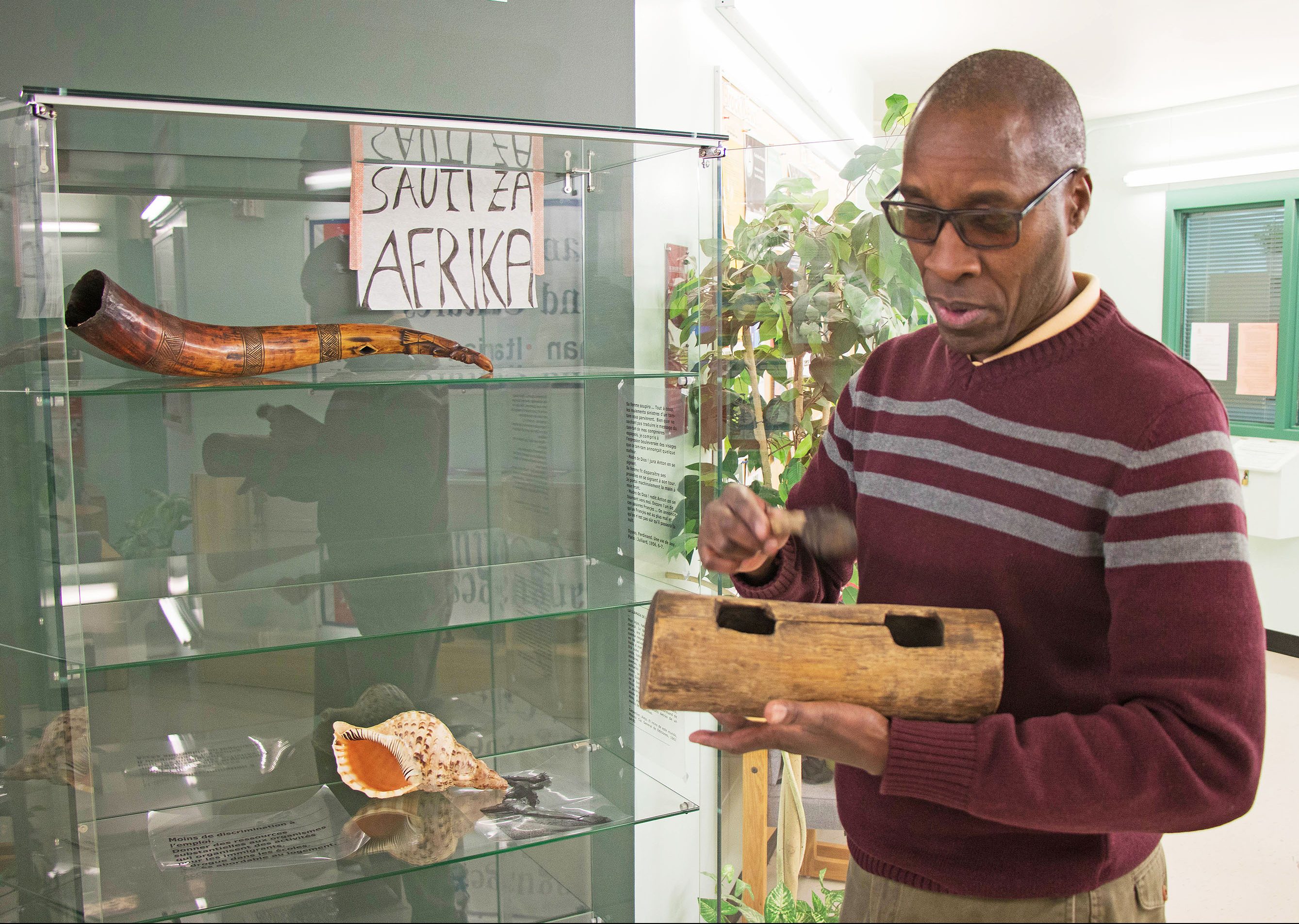 Jean Ntakirutimana, Chair of the Department of Modern Languages, Literatures and Cultures, demonstrates the talking drum used to send messages over long distances in Cameroon. With careful training, a person could use the different tones produced by the drum to send messages. The drum is just one of the items on display in Sauti za Afrika/ African Voices/ Voix Africaines, an exhibition celebrating voices of Niagara’s African diaspora community.

Students worked throughout the fall semester to bring the exhibition, curated by Associate Professor Catherine Parayre and instructor Donna Akrey, to life.

“It really helps to collaborate in one’s art practice,” said Akrey, whose art students were involved in the project.

“We also did an assembly line production to create some of the work, which was fun and rewarding. I was impressed with how the 3M90 students embraced this project and made sense of it for the viewing public.”

For the participating French students, the exhibition was a “great opportunity to practice writing constraints for fun,” said Parayre. “Students produced facetious manifestos, writing eloquently on a light-hearted topic. It allowed all of us to put our creative forces together and share a common space.”

The exhibition includes a visual component as well as a three-minute audio track created by the students.

Over at Brock’s main campus, the Department of Modern Languages, Literatures and Cultures (MLLC) is hosting Sauti za Afrika/African Voices/Voix Africaines, an exhibition meant to amplify the voices of the African diaspora in Niagara. Featuring 12 different languages, the exhibition combines modern writing with ancient traditions of communication.

The display features instruments and figurines used for communication, such as a conch shell, similar to the one used to call for revolution in Haiti, and miniature replicas of Burundi drums used by royalty to communicate with their people.

Ntakirutimana worked with members of Niagara’s African diaspora and Sofifran (Solidarité des femmes et familles immigrantes francophones du Niagara) to collect people’s hopes, dreams and concerns to include in the display. Members have also loaned their personal objects for the exhibition.

The display is a precursor to an event by the same name coming up in February. Co-hosted by Sofifran, MLLC and Studies in Arts and Culture, the event will be held at Rodman Hall and will also engage with Northern Oracle.

Sauti za Afrika/African Voices/Voix Africaines is a part of the Museum in the Hallway project, curated by Parayre. Located in the Department of Modern Languages, Literatures and Cultures (Mackenzie Chown A-block), the project features rotating monthly displays.

Both African Voices and Manifestos in A Room will be on display until the end of December. Northern Oracle will be at Rodman Hall until March 3.