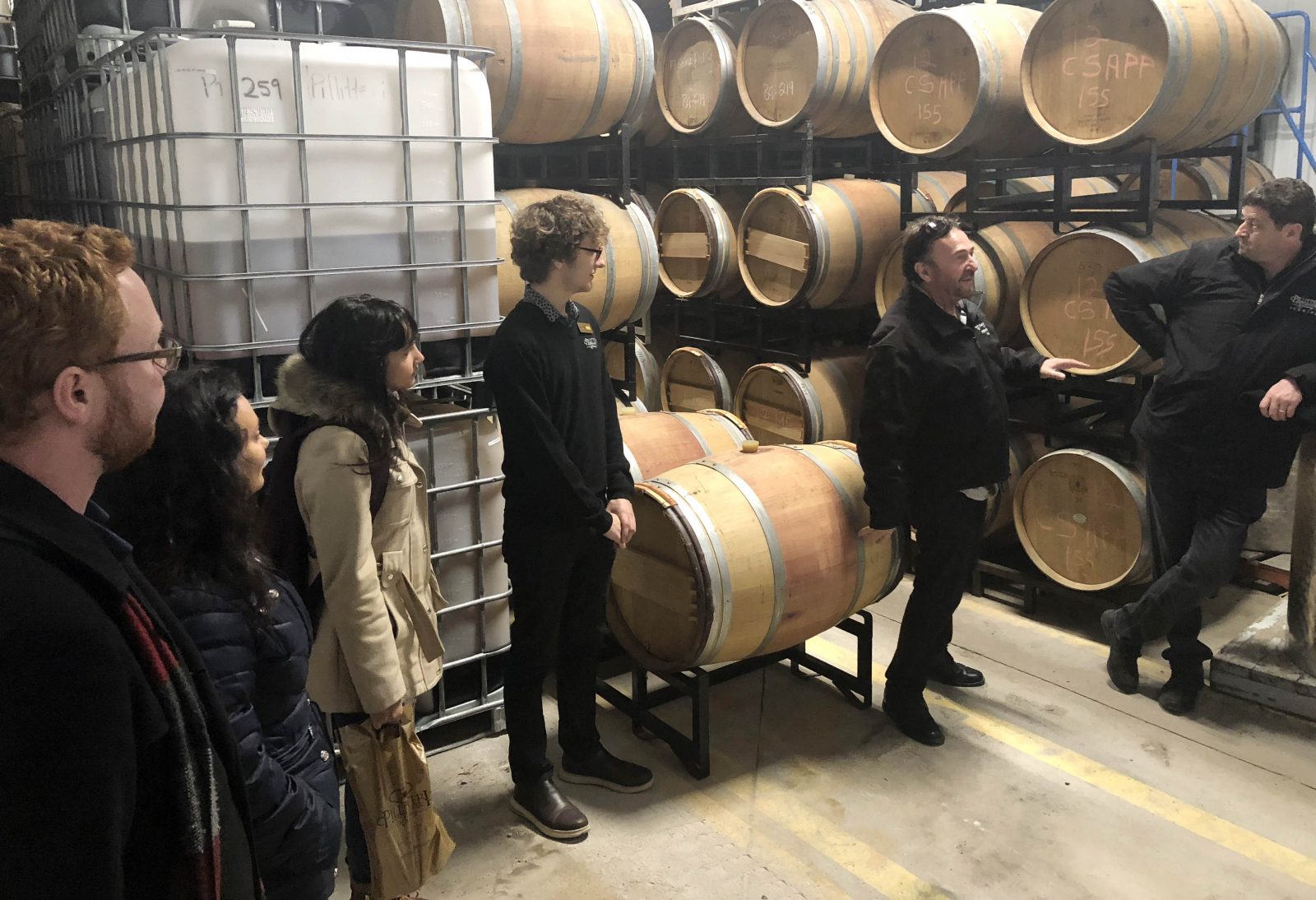 Students from Brock University’s Oenology and Viticulture (OEVI) program stepped outside the classroom for an exclusive behind-the-scenes tour of Pillitteri Estates Winery recently.

The winery invited them on the in-depth tour which included tasting the first barrel sample of Corvina produced in Ontario because it is offering four co-op positions for next year and wants to hire students from Brock.

“Brock’s Cool Climate Oenology and Viticulture Institute (CCOVI) has a great reputation and we are seeing a lot of talent come out of Brock,” said Jamie Slingerland, Director of Viniculture for Pillitteri Estates. “We have several employees right now that have proven that.” 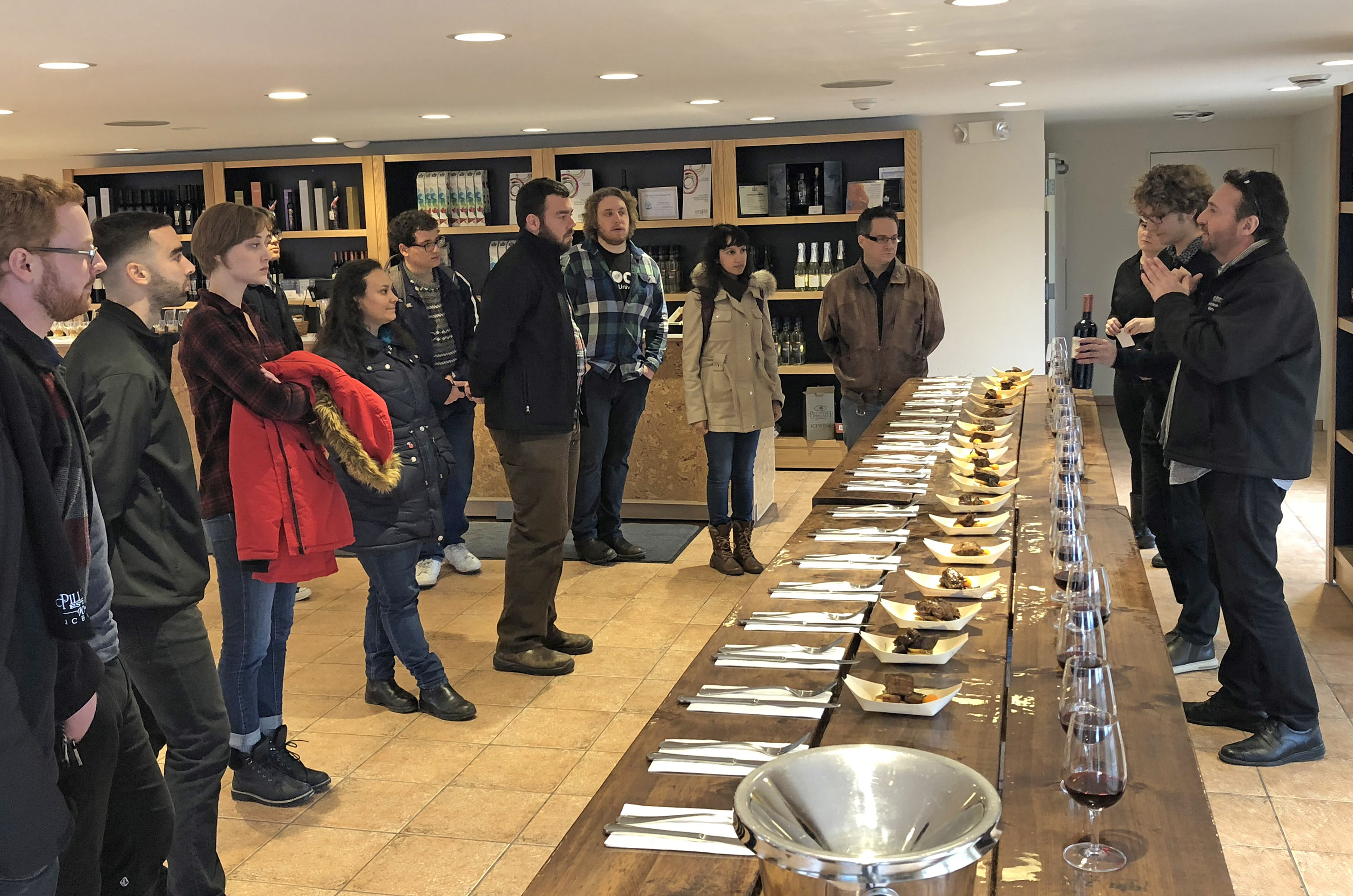 The OEVI students toured through the retail area, production building, press, tank and bottling rooms, as well as the lab and barrel cellar, then finished with a wine tasting and food pairing lead by Gigliotti.

“It was quite interesting to see and try the different styles of wines that they make, like the 2015 Corvina,” said third-year student Lauren Barber.

Pillitteri Estates makes Ontario’s first and only appassimento-style Corvina, made from the traditional Italian grape variety. Appassimento wines are the result of a labour-intensive winemaking process using grapes that are dried post-harvest to further ripen the fruit off-vine to concentrate sugars and flavours.

The Niagara-on-the-Lake winery has partnered with CCOVI researchers on a five-year Appassimento Project looking at different ways to dry the grapes.

“It was great to get to see a winery of such a large scale being able to produce such a wide array of wines, using different techniques and not being afraid to innovate further and try new things,” said Seth Jex, who is completing his certificate in grape and wine technology. “It is really engaging and interesting to find individuals as passionate as Jamie and Alex.”

Engaging these students is exactly what Slingerland wanted to do, hoping they will apply for the co-op positions. With a major expansion underway that will increase production, the winery is also planning to hire one of these graduates to be part of its winemaking team in the next two years.

“We want to recruit from the people who have had experience here at the winery,” said Slingerland.

That’s why he reached out to Melissa Beamer, Brock’s Manager of Senior Employer Development and Co-op Education, to set up the tour and create co-op opportunities in the winery.

“Jamie is our dream co-op employer because he is committed to learning, quality and making it an amazing experience for our students,” said Beamer.

Slingerland said his goal was to show the Oenology and Viticulture students the production facilities at the family-run winery, known globally for its Icewine, and introduce them to all the winery has to offer. The group wrapped up the day in the still-under-construction, 12,000-square-foot production building, which will feature a new area where the public can learn about the winemaking process.

“I think I have tweaked a few interests and I am going to see some resumes coming in for jobs, and that is exactly what we’re looking for,” said Slingerland.