Volunteers warm hearts on cold day with message of hope 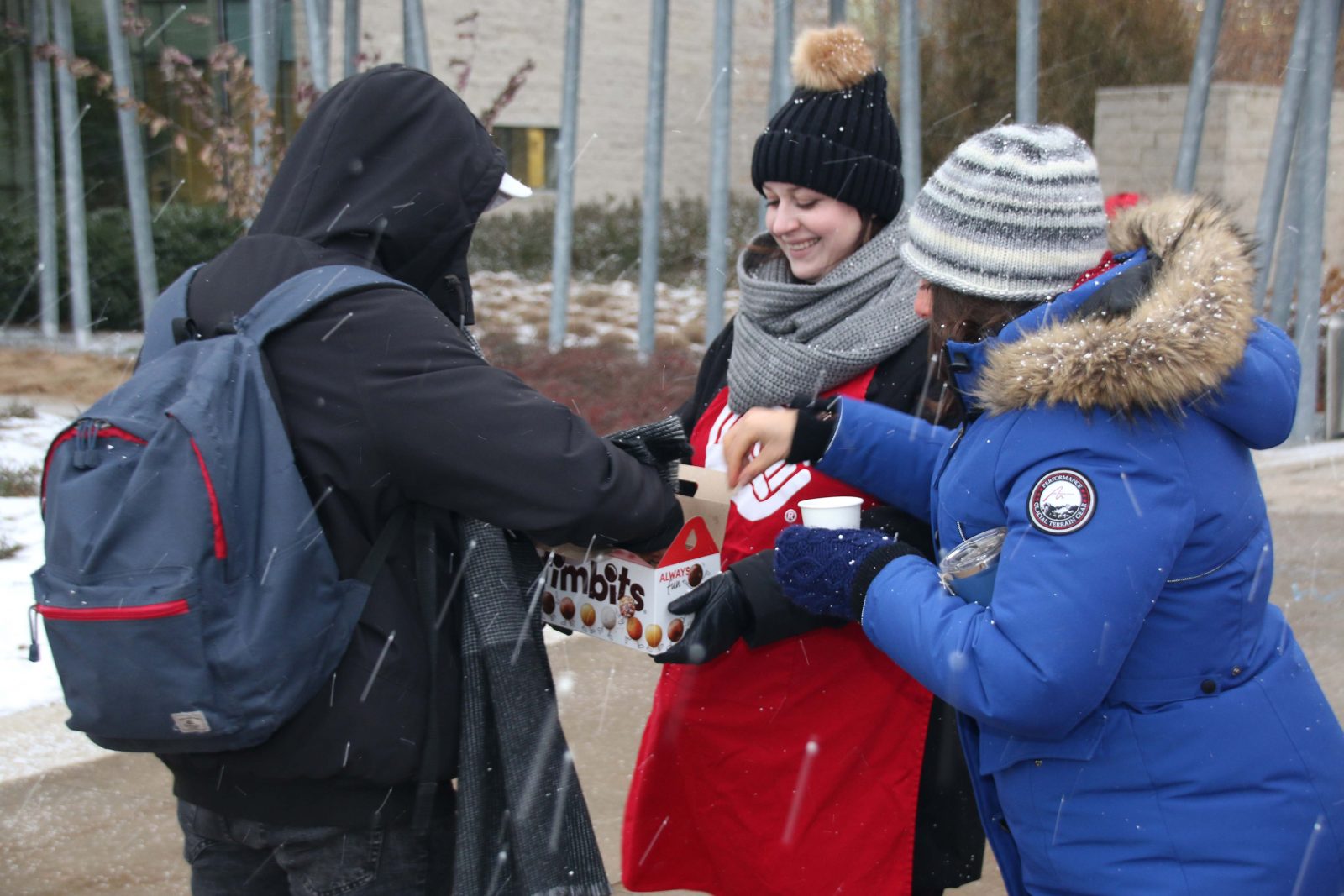 It was still dark as United Way committee members arrived Wednesday morning to set up a sweet surprise for the Brock community.

As students, faculty and staff arrived on campus, they were greeted by teams of volunteers outside the Plaza Building and Cairns Family Health and Bioscience Research Complex offering hot chocolate and Timbits.

The Hot Chocolate for Hope pop-up event aimed to raise awareness about the importance of United Way Niagara as well as faculty and staff participation in the University’s United Way fundraising campaign.

With temperatures hovering around freezing and light snow falling, many were grateful for a free cup of hot chocolate.

“November has been a bit dreary this year,” said event co-organizer Jennifer Kopczinski, Curriculum Specialist with Brock’s Centre for Pedagogical Innovation. “We hope that greeting our colleagues with a cup of warm hot chocolate and a friendly smile as they arrive on campus will encourage them to pay it forward and contribute to Brock’s United Way campaign. Even a small donation may bring a bit of hope to those who need it most.”

By about 9 a.m., the 15 volunteers had handed out nearly 240 cups of hot chocolate and dozens of Timbits, all of which was donated by Catering Services.

One of the volunteers helping to share United Way’s message of hope was Brian Hutchings, Vice-President, Administration.

“In my previous life, I was Commissioner of Community Services for Niagara Region, so I know all the services United Way provides that help people who need assistance in our community,” said Hutchings, who has also served as a United Way board member. “It’s really important that we make people aware of United Way — it’s an essential service.”

More than 163,000 people in Niagara receive support through more than 100 programs and special initiatives funded by United Way Niagara each year. One in three people in the region will use a United Way-funded program in their lifetime.

Faculty and staff involvement with the United Way campaign is an important connection to the community for the University, said Greg Finn, Interim Provost and Vice-President, Academic.

“I’ve been donating regularly to United Way since I came to Brock in 1985,” said Finn, who has served as faculty co-chair of the University’s United Way committee. He said giving back to the community is something he learned from his parents.

“Standing out in the cold like this — there are people who do this all the time and they don’t have a place to go home to that’s warm,” he said.

The Brock community has raised more than $1.7 million for United Way over the past 15 years. While it’s a significant amount, it’s important to remember every dollar makes a big difference. Just $2.50 per week, or $130 per year, can provide counselling to 10 people in need, while $5 per week, or $260 a year, can provide five children with a one-on-one literacy program.

Faculty and staff can donate to Brock’s United Way campaign through payroll contribution. Those giving for the first time will have their donation matched dollar for dollar by Meridian Credit Union.

More information is available on the United Way SharePoint site.