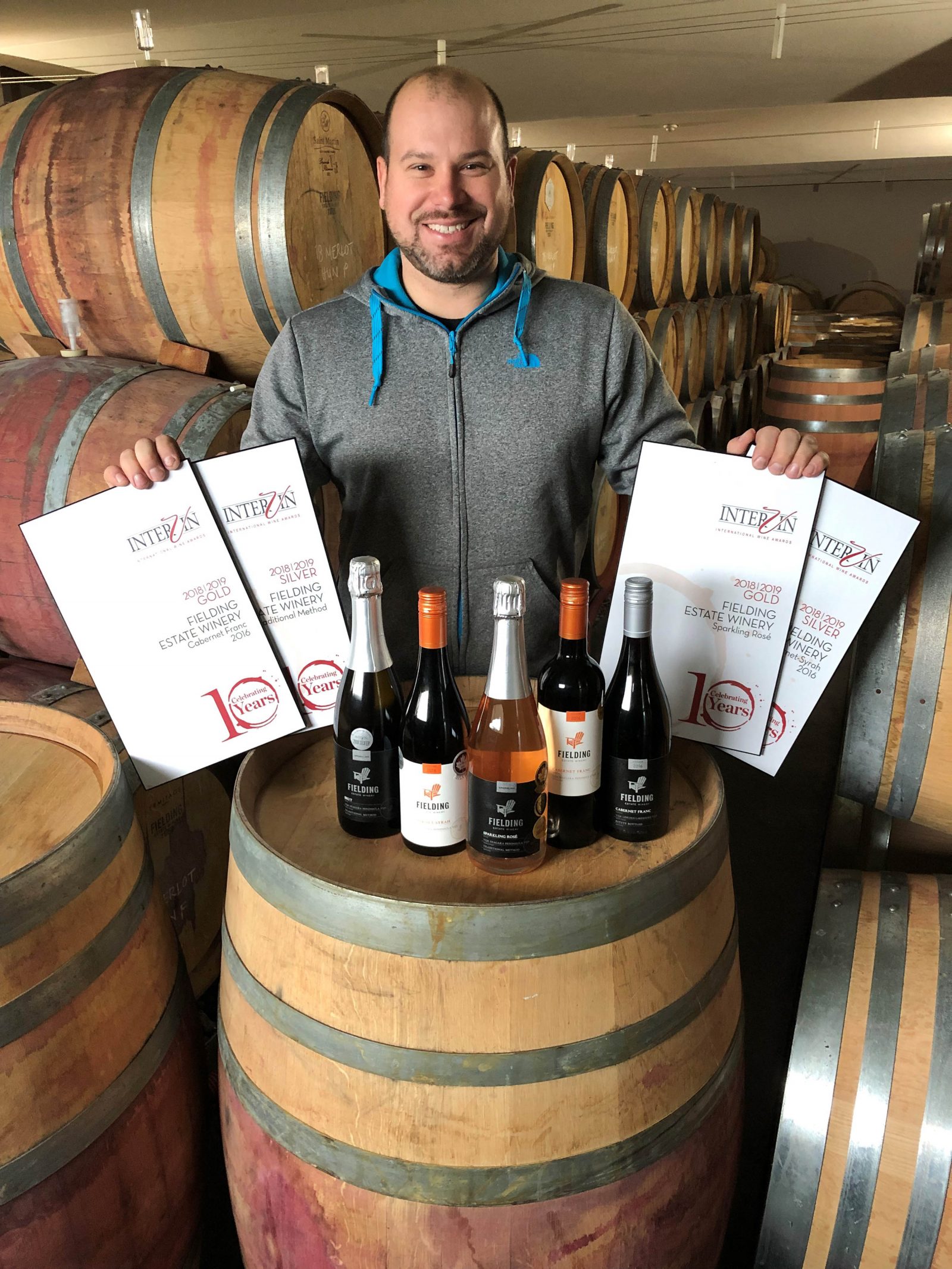 Brock alumnus Richie Roberts, winemaker at Fielding Estates Winery, with his award-winning wines after winning a spot in the InterVin Top 10.

Whether being celebrated as part of a top winery, earning gold and silver medals for their wines or sitting on the expert judging panel, Brock University graduates had a strong presence at this year’s InterVin International Wine Awards.

For the first time, Fielding Estate Winery in Beamsville earned a spot in the InterVin Top 10, and winemaker Richie Roberts (BSc ’04) said it is an exciting honour.

“In Ontario, we have a lot of vintage variation and every year is a little different, so our portfolio is always evolving,” said the Brock alumnus. “I feel like the portfolio of our wines is better than it has ever been, and I think it is reflected in the awards we won.” 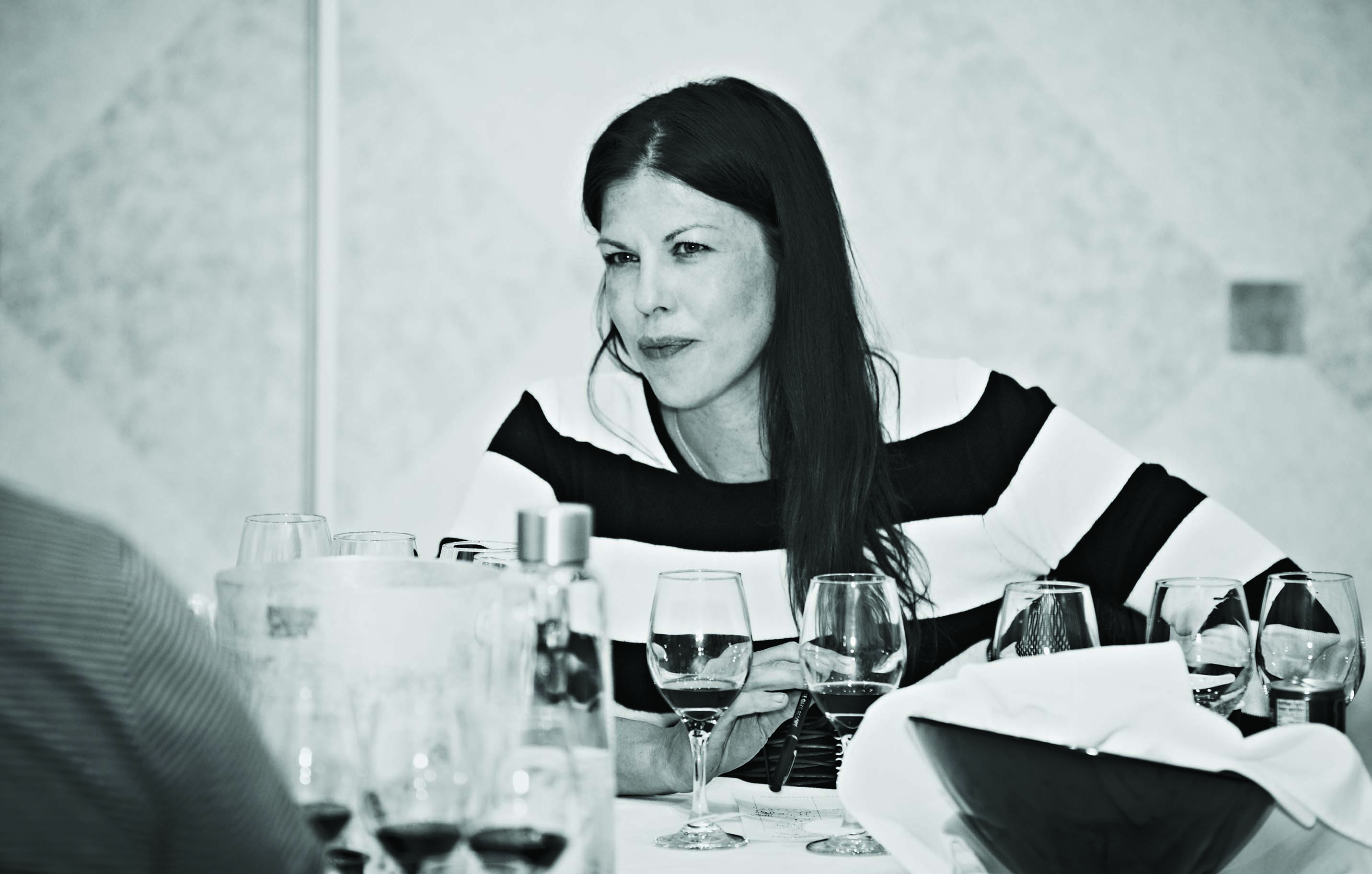 “Those gold-winning wines — cab francs and sparkling — are wines that I think Ontario does really well. I am proud of that,” said Roberts.

The 37-year old St. Catharines native said that is made possible in part by the work that Cool Climate Oenology and Viticulture Institute (CCOVI) Senior Scientist Belinda Kemp does with Fizz Club — a networking group for Canadian sparkling winemakers.

“That has really been instrumental in helping to improve those sparkling wines. I have gotten several ideas from the Fizz Club events that we have done,” Roberts said. “Things we have talked about in those seminars, like the final pressure in the bottle for traditional method sparkling wine, have really impacted how those wines are being made now and we are seeing the success of those changes in the awards we are winning.”

Also earning a spot in the Top 10 was CedarCreek Estate Winery in Kelowna, B.C., which received the honour for the second consecutive year. CedarCreek winemaker and Brock alumnus Taylor Whelan (OEVC ’10) called the award “extremely validating.”

“It is a good way to measure our success in terms of if we are making progress when it comes to the style and quality of our wines,” he said.

Whelan has worked at wineries in Niagara, New Zealand, Australia and British Columbia and has been head winemaker at CedarCreek Estate Winery for the last three harvests. He said the strong Brock showing at InterVin is an example of the quality of the program.

“It is a high-level program and we have been able to establish ourselves and begin to fill those winemaking positions,” Whelan said. “It has allowed us to compete with Australians and New Zealanders, people who are educated at some of the top schools in the world, for the winemaking positions here in Canada.”

Six judging panels made up of representatives from different backgrounds in winemaking, media/education or hospitality blind tasted their way through more than 1,200 wines.

“Being an international wine judge is something that I am very proud of,” said Tomek, who has been a judge for InterVin since 2012.

The 37-year old from Welland, who took home a silver at this year’s competition for her 2017 Quitting Time Pinot Grigio, says it is no surprise the industry is seeing these successes from CCOVI’s oenology and viticulture graduates.

“You are groomed to be thinkers and researchers and scientists,” said Tomek. “But you are also breaking down that grapevine to understand why your vines are behaving the way they are, giving you the tools to troubleshoot and experiment when out in the industry.”

InterVin head judge, Christopher Waters, is a continuing education instructor at CCOVI as well as the editor of Vines magazine.

For more information and a full list of the awards, visit intervin.ca