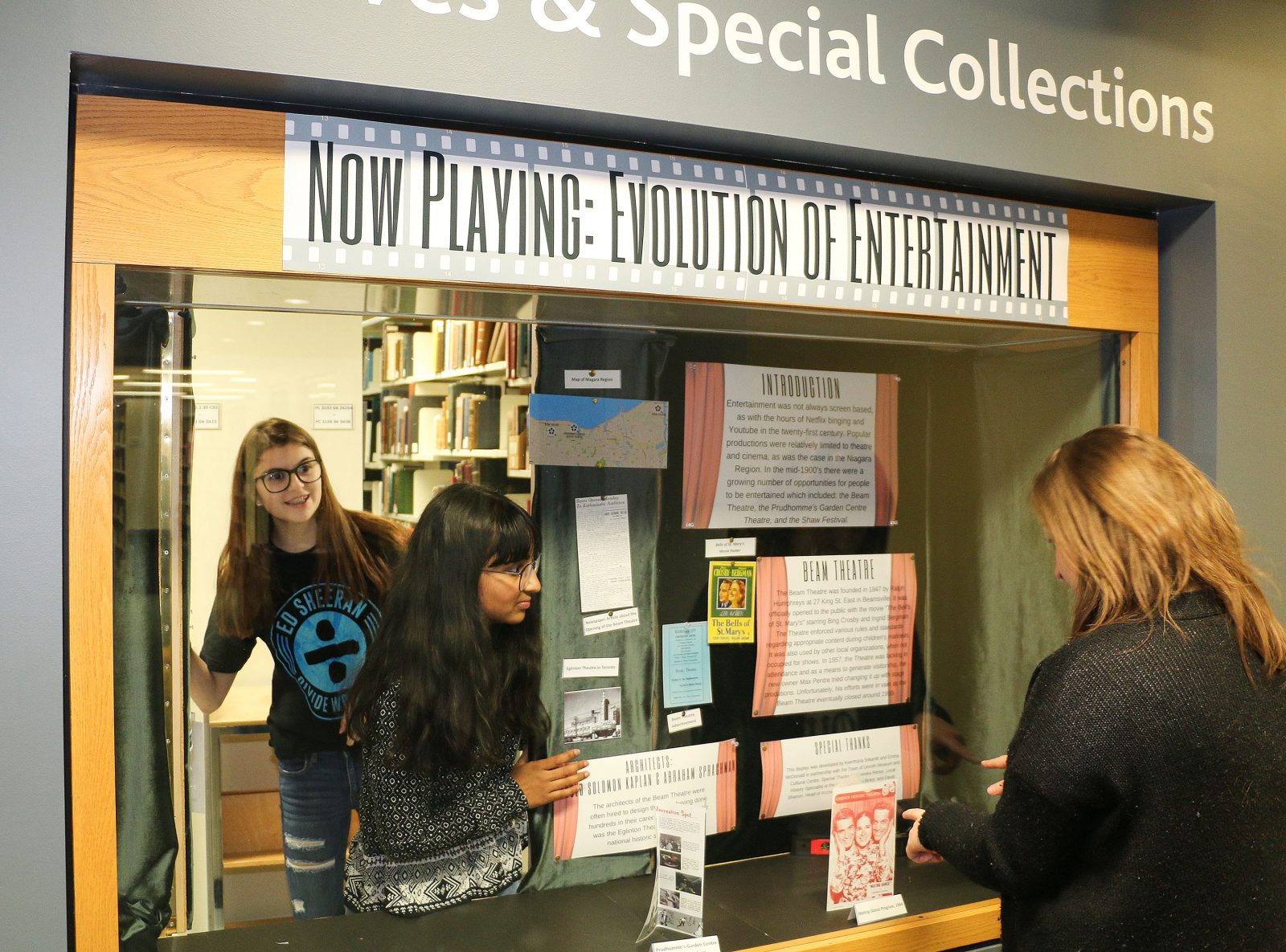 The history of entertainment in Niagara is now in the spotlight at Brock University thanks to the hard work of two local high school students.

The work of Beamsville District Secondary School students Emma McDonald (daughter of History Professor Andrew McDonald) and Keerthana Srikanth is on display in the University’s Archives and Special Collections.

The opportunity to create an exhibit about historical theatres in Niagara came about after the pair of 15-year-old students devoted hours of their spare time volunteering at the Town of Lincoln Museum and Cultural Centre. 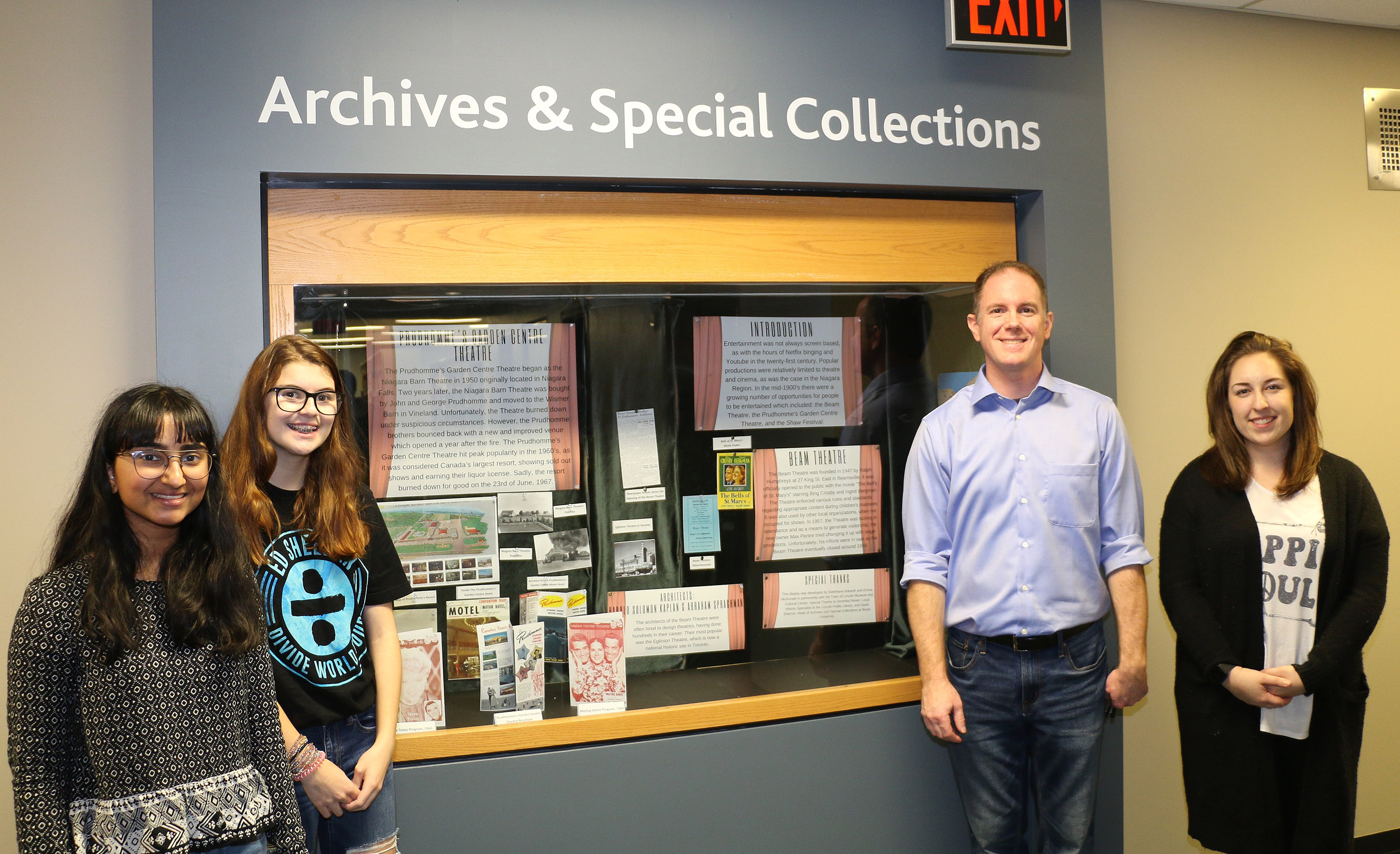 Having seen the girls’ passion for history, the museum’s curator, Brock Master of Geography student Lisa Marie Mercier, invited the duo to curate an exhibit of their own, Now Playing: Evolution of Entertainment.

“The exhibit connected the girls to history in a way that would not otherwise be possible,” she said. “It allowed them to engage with historic material on a very personal level.”

After deciding to focus their exhibit on entertainment, the Grade 10 students met with David Sharron, Brock’s Head of Archives and Special Collections, to examine some of the University’s collection and narrow their focus.

“Once they chose their topics, we provided access to information and materials that would show well in an exhibit,” he said of the photographs, maps and programs on display. “They filtered through everything and did all the research and selections.”

The two young curators were appreciative of the expansive resources on offer in the archives.

“It was really interesting and overwhelming,” said McDonald. “There were lots of cool things to choose from.”

Having a wealth of resources from the museum and Brock’s archives made the task of choosing the most appropriate items to display at Lincoln Town Hall and the University a little tougher.

“We needed to figure out what we wanted to focus on,” said Srikanth. “We narrowed it down to the Beam Theatre, the Prudhommes Garden Centre Theatre and the Shaw Festival, and then spent four months getting our materials together.”

Upon finishing the display’s assembly at Brock on Friday, Nov. 16, McDonald summed up the pair’s feelings about seeing the final product on show.

“We are really excited,” she said. “Seeing our work in such a large establishment is insane.”

For Sharron, the display is a welcome addition to the Archives and Special Collections display cases.

“I saw pictures of what they did at the Lincoln town hall and it looks fantastic,” he said. “The fact that they can do another project here shows the wealth of information they put together. They are two impressive young women.”

Sharron said the project aligns with Brock’s ongoing commitment to engage with the community while also encouraging young people like McDonald and Srikanth to consider the University in a few years.

“I think it’s a great opportunity to reach out to the community, share our collections with young people and get them interested in what we do here,” he said. “We hope that when they are considering an institution for post-secondary studies, they will think of us.”

Now Playing: Evolution of Entertainment can be viewed in the Archives and Special Collections display cases on the 10th floor of the James A. Gibson Library until the end of March 2019.