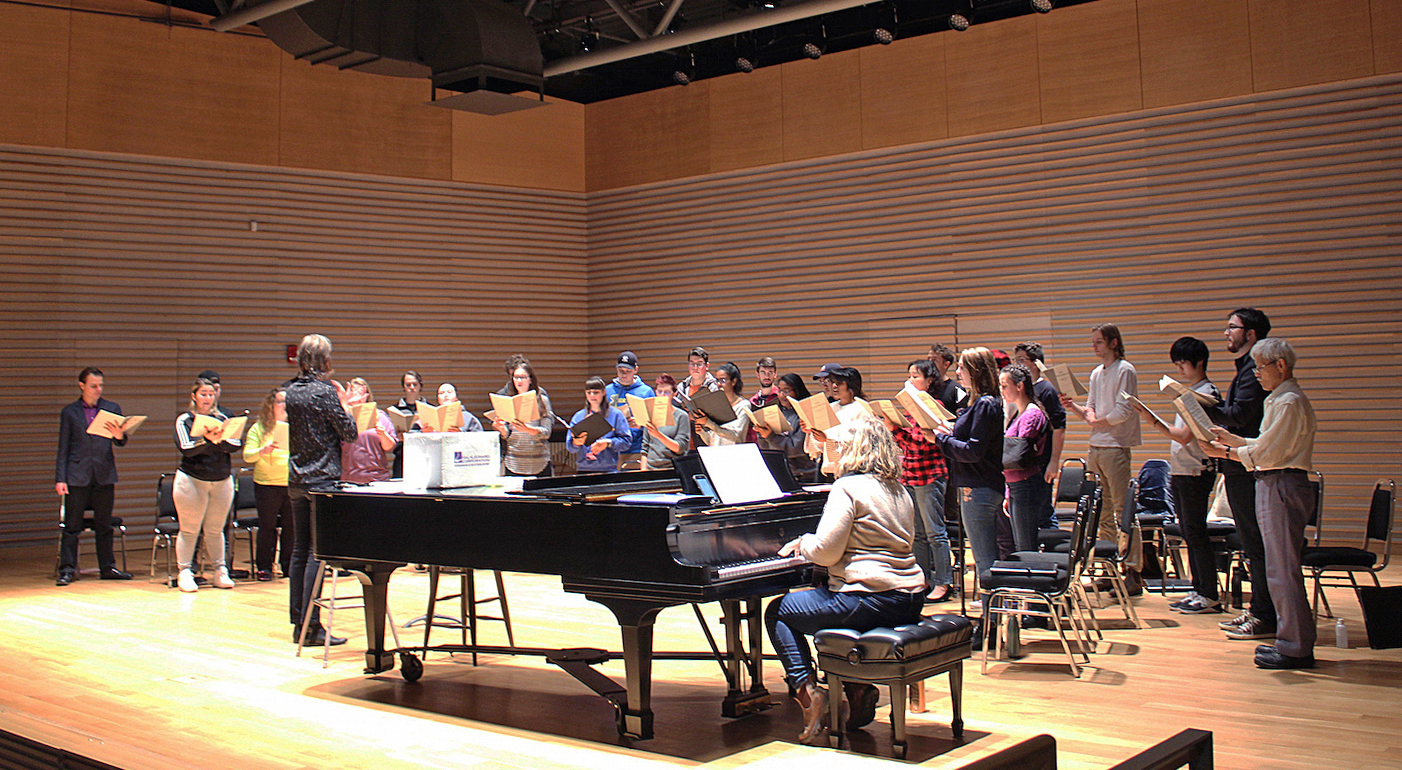 The Brock University Choirs rehearse for their upcoming performance on Saturday, Dec. 1 at 7:30 p.m. in Cairns Recital Hall of the FirstOntario Performing Arts Centre.

Brock University’s new Women’s Choir is joining forces with the established Chamber Choir to perform its first concert next month.

Assistant Professor Rachel Rensink-Hoff will lead the Brock Choirs in Concert performance on Saturday, Dec. 1 at 7:30 p.m. It will take place at the Cairns Recital Hall of the FirstOntario Performing Arts Centre in downtown St. Catharines.

The concert is part of the Department of Music’s Viva Voce! Choral Series, which begins its season Saturday, Nov. 24 with a performance by the Avanti Chamber Singers. The Women’s Choir and Chamber Choir are each comprised of about 30 members from Brock University and the wider Niagara community.

Rensink-Hoff believes the concert provides a great opportunity to bridge the gap between students and the community and showcase the breadth of talented singers from the region as a whole.

“It’s a neat dynamic as the students get to know the community members and vice versa,” she said. “I’ve been trying to encourage interaction between the singers during breaks so that it feels as comfortable as possible and the singers can bond with each other.”

The choirs will be joined on stage by the Walker String Quartet, which will also perform some solo pieces during the concert.

The Brock Choirs in Concert performance will take place at 7:30 p.m. on Saturday, Dec. 1 at the FirstOntario Performing Arts Centre.

Tickets for the concert are $15 for adults and $10 for seniors and students. There is also a $5 option available for eyeGo program members. Tickets are available through the FirstOntario Performing Arts Centre (PAC) Box Office at 905-688-0722 or on the PAC website.

The next performance in the Viva Voce! Choral Series will take place on Feb. 23 featuring the Avanti Chamber Singers. For more details on upcoming concerts, visit the Department of Music website.