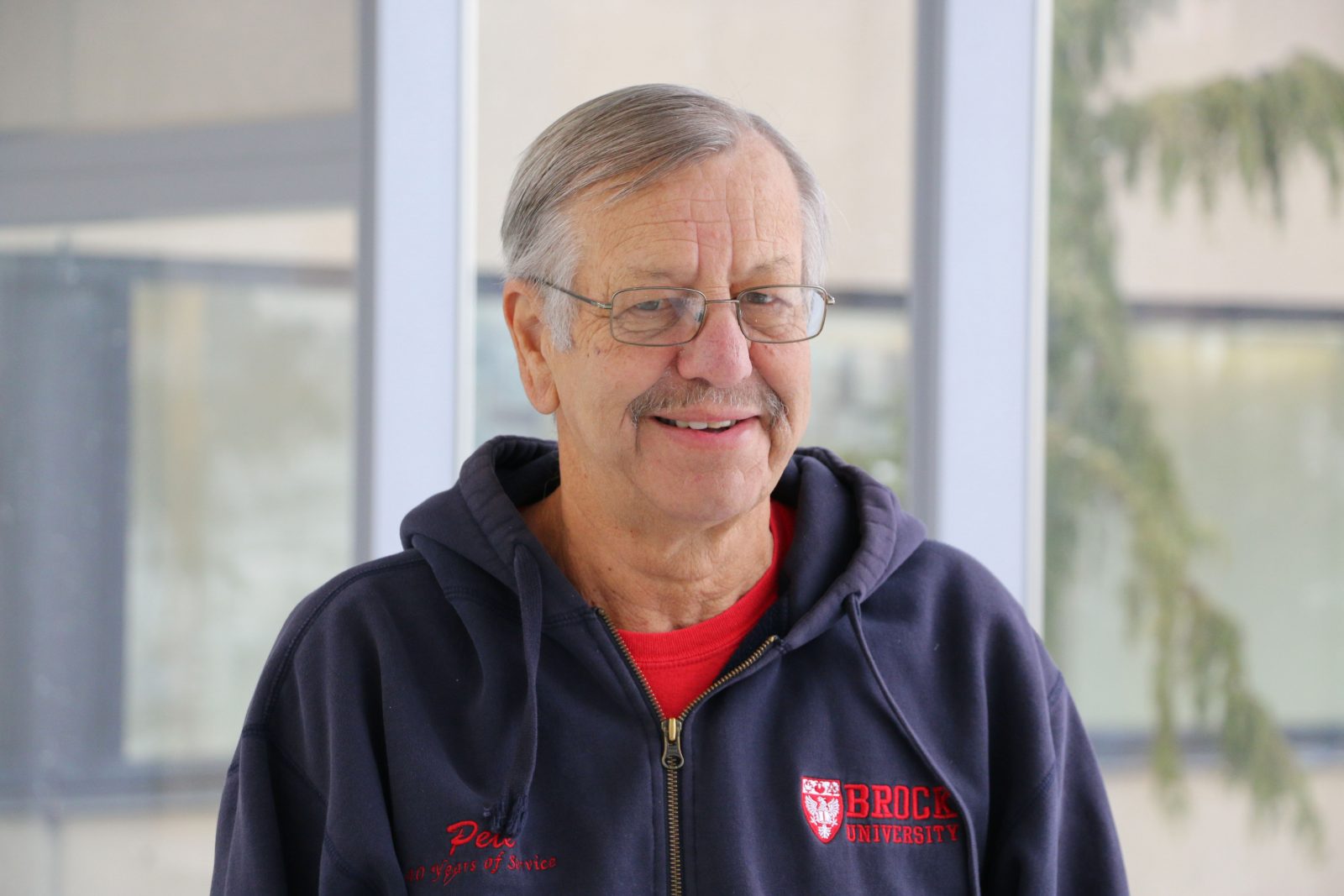 Senior Storekeeper Peter Barclay is retiring after 50 years of service, making him the longest-serving ongoing Brock employee in the history of the University.

When Peter Barclay first started working at Brock, the University was a mere four years old. Its inaugural president, James Gibson, was still in office and the Thistle Complex was under construction.

After 50 years as a storekeeper, Barclay is hanging up his lab coat and retiring at the end of the month, making him the longest-serving, ongoing employee in the history of the University.

“I was planning on retiring a couple of years ago but my friends talked me into staying,” he said. “They knew that no staff member had made it to 50 years. I can’t believe five decades has come and gone. It went by fast.”

Barclay’s first role with the University began on Nov. 18, 1968. He was hired to work under Bernie Clermont as an assistant storekeeper in the Department of Chemistry. Barclay and several other employees worked at what was then called the Glenridge or lower campus in the refurbished refrigerator factory that was once the University’s first home.

In 1970, when Clermont was promoted to work as a buyer in the Purchasing Department, Barclay was offered the head storekeeper position, but he was reluctant to take it. With only 18 months of training, he felt he didn’t have enough experience to “do the job right,” he said. Another person was hired to replace Barclay’s supervisor.

“I ended up explaining a lot of things to him,” said Barclay. “I realized, maybe I should have taken the job.”

Call it fate or just good timing; in the end it worked out fine. A couple of months later, Barclay was granted an internal transfer to work as a senior storekeeper in the Geology Department (now Earth Sciences), a position Barclay has held ever since.

“It will take some time before the reality of life without Pete sinks in,” said Fueten. “Most of his tasks will have to be distributed to others, but nobody will be able to fill his shoes.”

As Senior Storekeeper, Barclay is responsible for managing and ordering lab supplies as well as field and microscope equipment such as test tubes and centrifuges. Fueten said countless other duties have arisen over the years, often randomly, like bearing the burden of key master, as well as managing the department’s purchases and accounts.

“Pete has been an absolute constant in our department. Much like a physical constant in nature, he has seemingly always been here,” said Fueten. “Employees have come to know the answer to many problems at work as ‘go see Pete’ — he always knew the answer or what action was needed. With his departure, the department will also lose the institutional memory many of us have come to depend on.”

During his time at Brock, Barclay was involved with faculty and staff clubs in hockey, curling and summer rowing. He still recalls the intense winter exercise program the rowers practised, which included running up and down the stairs of Schmon Tower five times in a row.

“I can appreciate what people have to go through when the fire alarms go off in the tower,” he said. “But for us, going down the stairs was our rest time to cool down our muscles.”

Barclay also trained in the University’s gymnasium. It’s where, in 1975, he first struck up a conversation with Nancy Fawdry (BPhEd ’76, BEd ’77), a fourth-year Physical Education student and captain of the varsity women’s volleyball team. 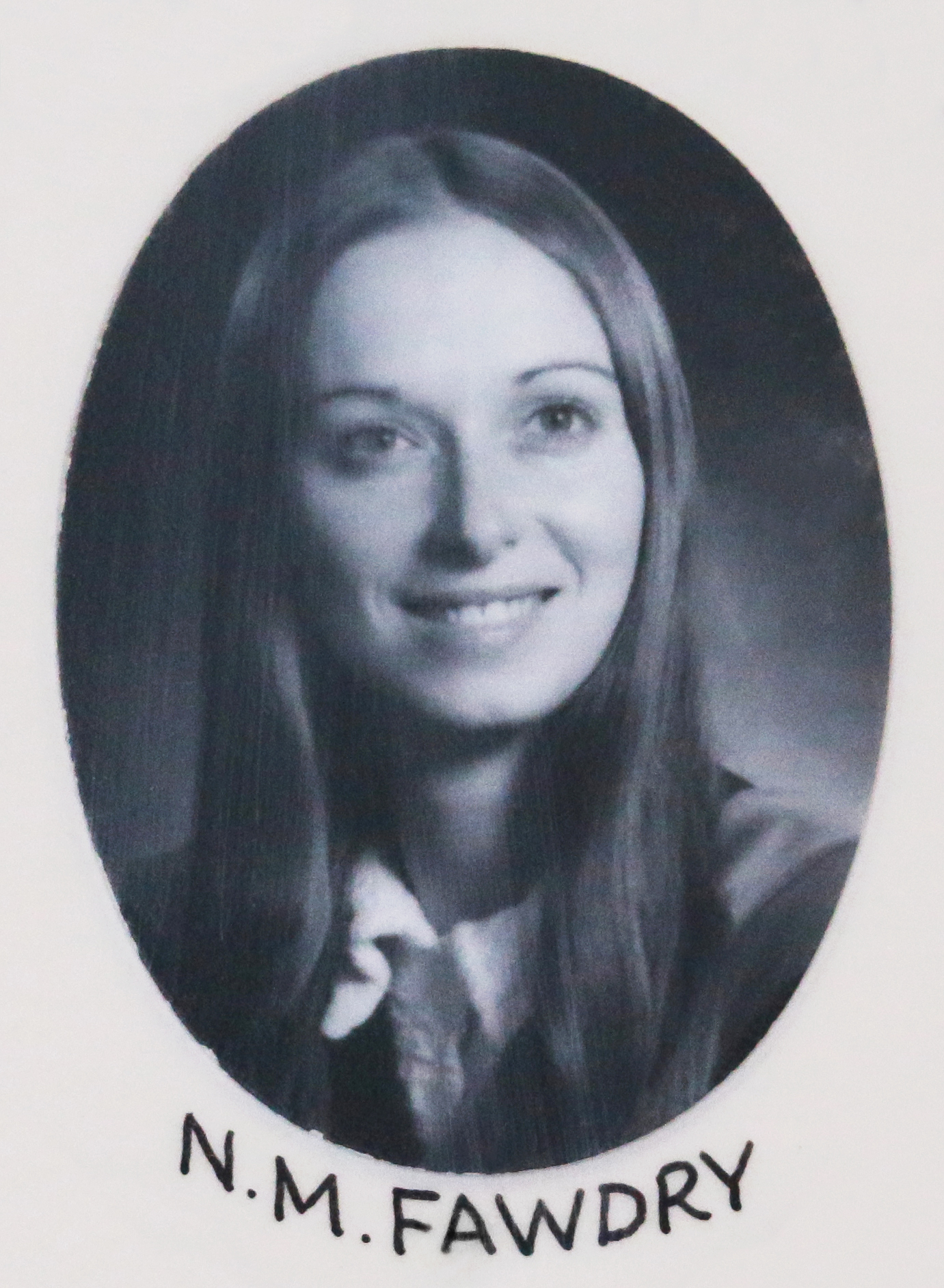 Barclay passes by this 1976 graduation photo of his late wife Nancy Barclay (nee Fawdry) on his lunchtime walks.

“I actually first met her at a Geology party,” he said. “One of my colleagues brought her as his date. They eventually broke up.”

Nancy went on to graduate from the Physical Education program and she and Barclay married. The next year she attended Brock’s Teachers’ College and became an elementary school teacher who worked to integrate children with special needs into classrooms.

After nearly 40 years of teaching and marriage, Nancy passed away in 2016.

Barclay’s memory of his wife lives on in the halls of Thistle Corridor, where her graduation composite photo still hangs.

“I walk by her every day and stop to look at her. She is forever young in that photo and I was blessed to share 40 years with her,” he said.

Although Barclay’s last day of work is Friday, Nov. 30, he plans to return to the University on Monday, Dec. 10 to attend the annual President’s Holiday Celebration.

In lieu of a retirement party or gifts, Barclay is requesting that employees consider donating to the Jaan Terasmae Memorial Award, a student award named after Barclay’s first manager, who was Chair of the Department of Geology.

“I’ll miss this place, I really will,” said Barclay. “My favourite time of year is the fall when the students return to classes. It’s interesting how alive the University becomes.”

In his retirement, Barclay hopes to spend more time with his cockapoos, Buddy and Holly, and plans to travel with his children, Andrew Barclay (BA ’08) and Lindsay Richardson (BA ’14). Before heading to bucket list locations Scotland, Australia and New Zealand, he wants to visit friends in Florida in the new year.

He also expects to continue cruising with his 1964 Corvette, which has made appearances at the University’s 40th and 50th anniversaries.

Barclay usually cruises during the week and picks a show on the weekend.

“Now that I don’t have to rush home from work, I can get the better parking spots at the shows,” he said.

But before Barclay checks off any of these items, he’s going to do something many working people cannot do.

“I’m going to sleep in for a while,” he laughed.