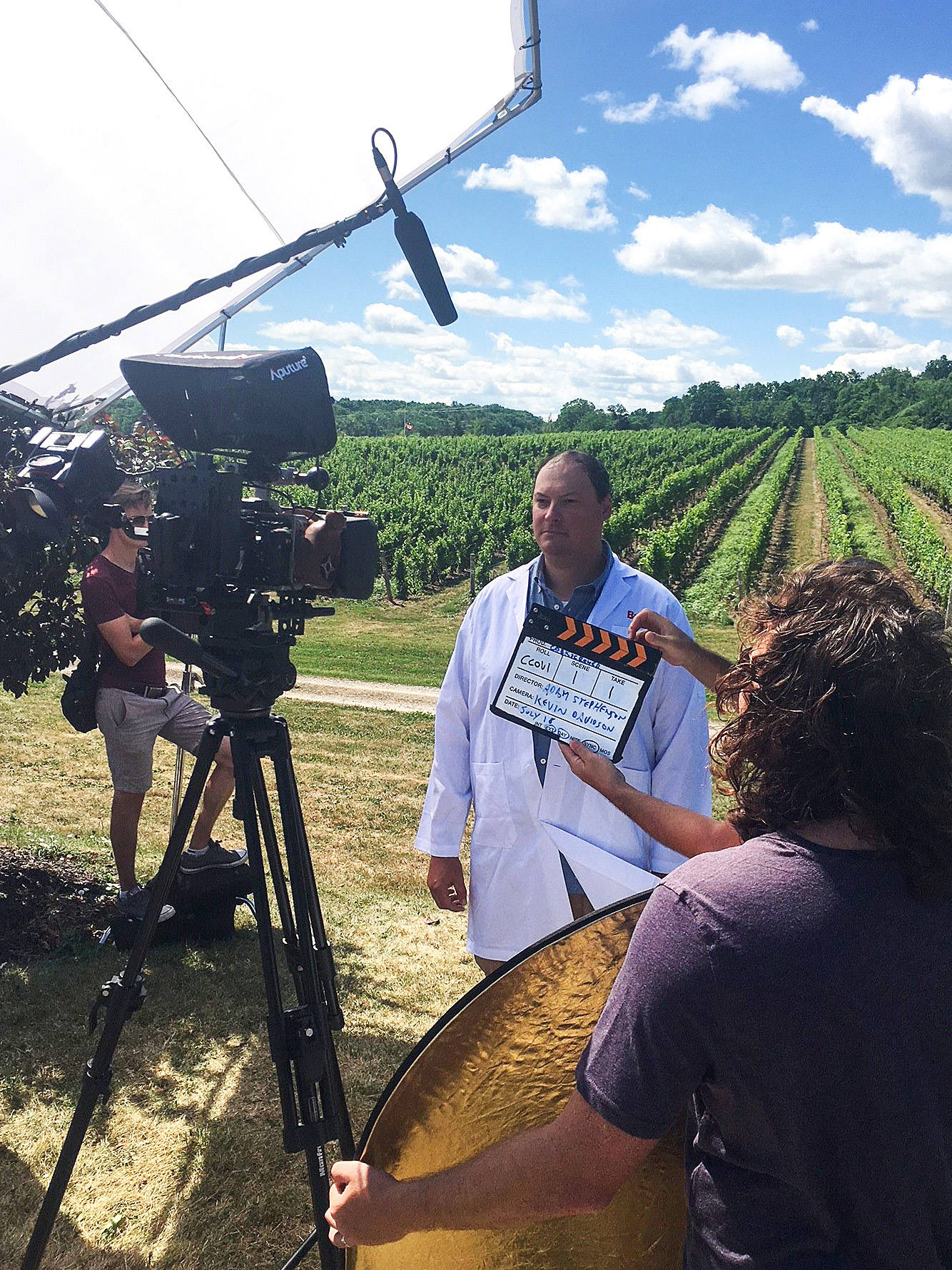 Cork Screwed takes a fun, lighthearted approach to learning about wine, and the two producer-hosts are the first to admit they didn’t know a whole lot when the project began.

“We talked to winemakers, grape growers, producers and the real scientists,” said Patrick Gagliardi (BA ‘13), a Brock alumnus who created the show with Ralph deGroot. “The people we worked with were so vibrant and engaging it was easy to absorb all of the information we were being taught.” 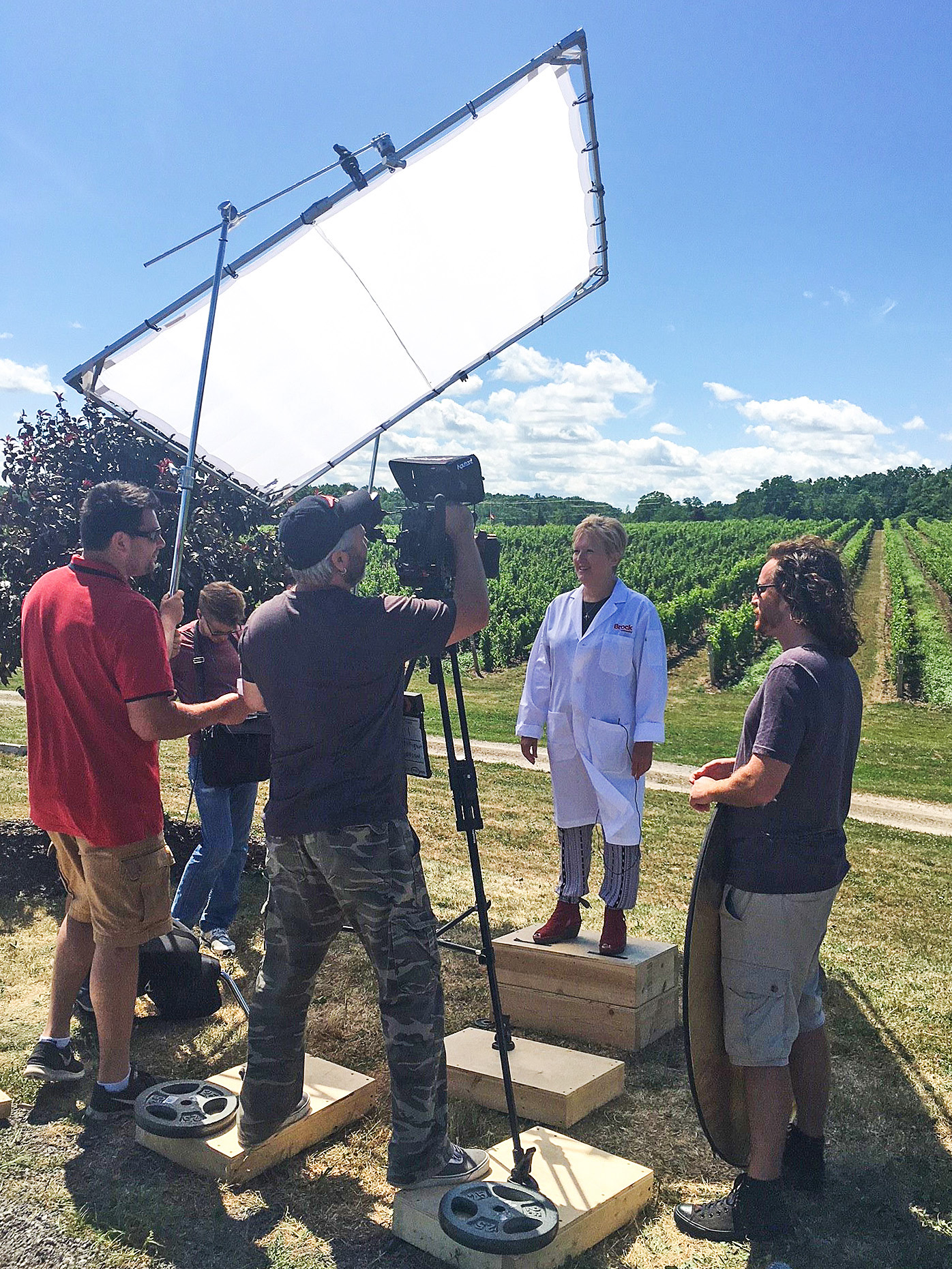 The Niagara natives visit a different winery in each of the five episodes. They learn about the history and geography of those wineries, explore different grape varietals and the science behind winemaking, and learn about wine and food pairings.

“By the end of the season it was way easier for me to understand a wine menu and some of the processes involved in its creation,” Gagliardi said. “I find myself constantly promoting Niagara VQA wines now that I know how unique and special this region is for growing grapes.”

The hosts turned to two CCOVI senior scientists, Jim Willwerth and Belinda Kemp, for help. They appear in each episode explaining things like how grapes are harvested, the process of fermentation and the meaning of terms like terroir. The pair worked to educate the hosts, and the viewers, while keeping the lessons fun and easy to understand.

“We needed an education partner who would break down the science behind what we were learning about in each episode. CCOVI was the real deal, hands-on, ground-to-glass Canadian authority on exploring and learning about wine,” said Gagliardi.

Cork Screwed opens at Brock University with the hosts meeting CCOVI Director Debbie Inglis, who introduces them to the expansive wine cellar in Brock’s Inniskillin Hall.

“After one meeting in the CCOVI cellar, it was evident that our mandates were aligned and that Brock University was the perfect place to start,” Gagliardi said.

“We had fun partnering with Patrick and Ralph on Cork Screwed to help breakdown the science of growing grapes and simplify the complex process of winemaking,” Inglis said. “Our scientists, and the show, did a great job presenting that information to people in an easy to understand format, while introducing them to the Niagara wine industry.”

They filmed the five episodes over six weeks this summer with a crew of Niagara workers, including other Brock alumni, camera operators Jade Robertson (BA ’16) and Adrian Dudziak (BA ’10), and media manager Taylor Zajdlik (BA ’15, MA ’17).

One of the episodes takes place at Henry of Pelham winery in St. Catharines, where brothers Matthew, Paul and Daniel Speck, introduced their Baco Noir.

Paul Speck, Henry of Pelham President, said the winery is celebrating its 30th anniversary this year and they were thrilled to participate in the show.

“It gives people a look at what we are doing here and introduces them to the region,” he said. “The show is done in an educational but also fun way, and we want people to have fun with wine as they learn about it.”

Cork Screwed is now available on Bell’s FibeTV1 and through the FibeTV app. The show’s creators are looking to relicense it to other companies and streaming services — like Netflix — after their exclusivity with FibeTV expires later this month. Bell has given the show the green light for a second season, which will feature 10 episodes.