Employees, students and research add up to Brock’s significant impact on Niagara 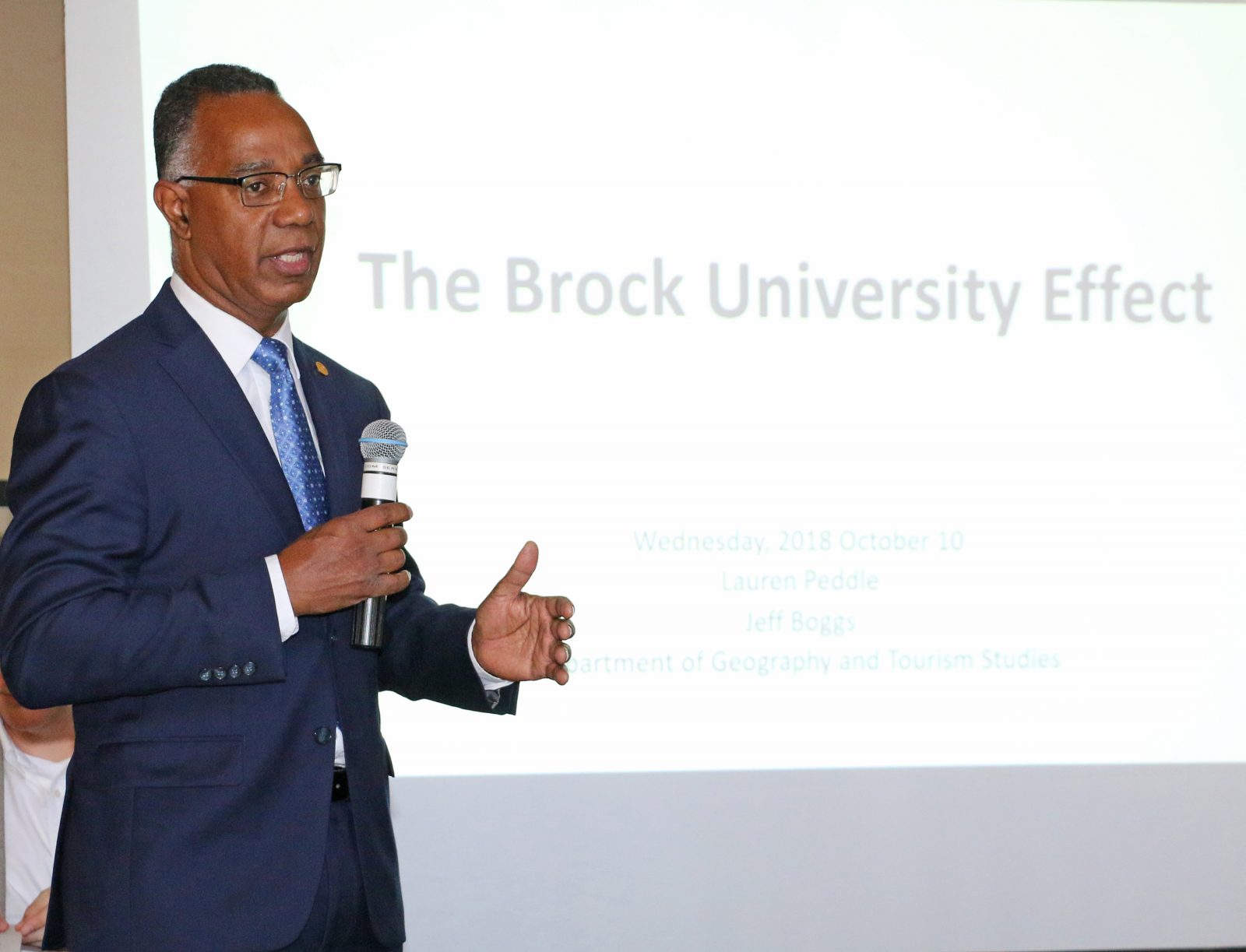 Nearly half a billion dollars. Even on the conservative end of the measurement scale, that’s the economic impact Brock University has on the Niagara region each year.

It comes in the form of Brock’s 19,000 students living in the region and spending their money here. It comes from hundreds of millions of dollars in capital and operational expenditures. And it comes from Brock’s 4,800 part- and full-time employees receiving more than $200 million in payroll each year.

“I encourage you to look beyond the numbers,” said Brock University President Gervan Fearon. “There are individuals directly tied to each of those dollar values. The values reflect the outstanding work our staff, faculty, researchers, students and partners are doing in contributing to economic and community activities across the region and province.”

A new policy brief released by the Niagara Community Observatory (NCO) Wednesday, Oct. 10 gives an updated snapshot of the University’s economic impact locally and beyond. The brief is a pilot project that will lead to more wholesome economic impact studies, as well as research examining Brock’s social and community engagement impact.

“One of the things this paper does is show how the University can be a catalyst and a partner in Niagara,” Fearon said. “Brock is a community-based university and what we’re celebrating here is not just our achievements, but the achievements of the entire community.”

Using conservative assumptions as the basis, one method estimates Brock’s impact in Niagara to be more than $436 million and the other more than $450 million. When student and related spending are considered, this number jumps to nearly $640 million.

Brock has an annual operating budget of $320 million and a payroll of more than $212 million. It’s one of Niagara’s biggest employers, and nearly 80 per cent of its employees live in the region.

Brock Vice-President, Research Tim Kenyon said measuring and characterizing a post-secondary institution’s impact on its community is a “ferociously difficult challenge.” But Brock’s decision to take it on shows the University’s commitment to being a community partner.

He added that Brock’s more than $15 million in research grants received in the past year translates into equipment purchases, new hires and the enabling of research that positively impacts the community.

The policy brief will become a foundation for future research and planning, said Fearon.

“We’ll now be able to look at the numbers to say ‘how can we have the greatest financial impact at a regional level?’”

Deputy St. Catharines CAO David Oakes, one of the panelists at Wednesday’s NCO event, said Brock’s impact on municipalities in the region is immense.

“Brock is critical to the St. Catharines economy,” he said. “You look at something like the Steel Blade hockey game, where you have 5,000 students coming downtown — that has a direct impact on the downtown core that wouldn’t have been there otherwise.”

Other panelists reflecting on the important role played by the University and the value added to Niagara communities included Mishka Balsom from the Greater Niagara Chamber of Commerce, Rino Mostacci from the Niagara Region and Peter Tiidus, Dean of Brock’s Faculty of Applied Health Sciences.