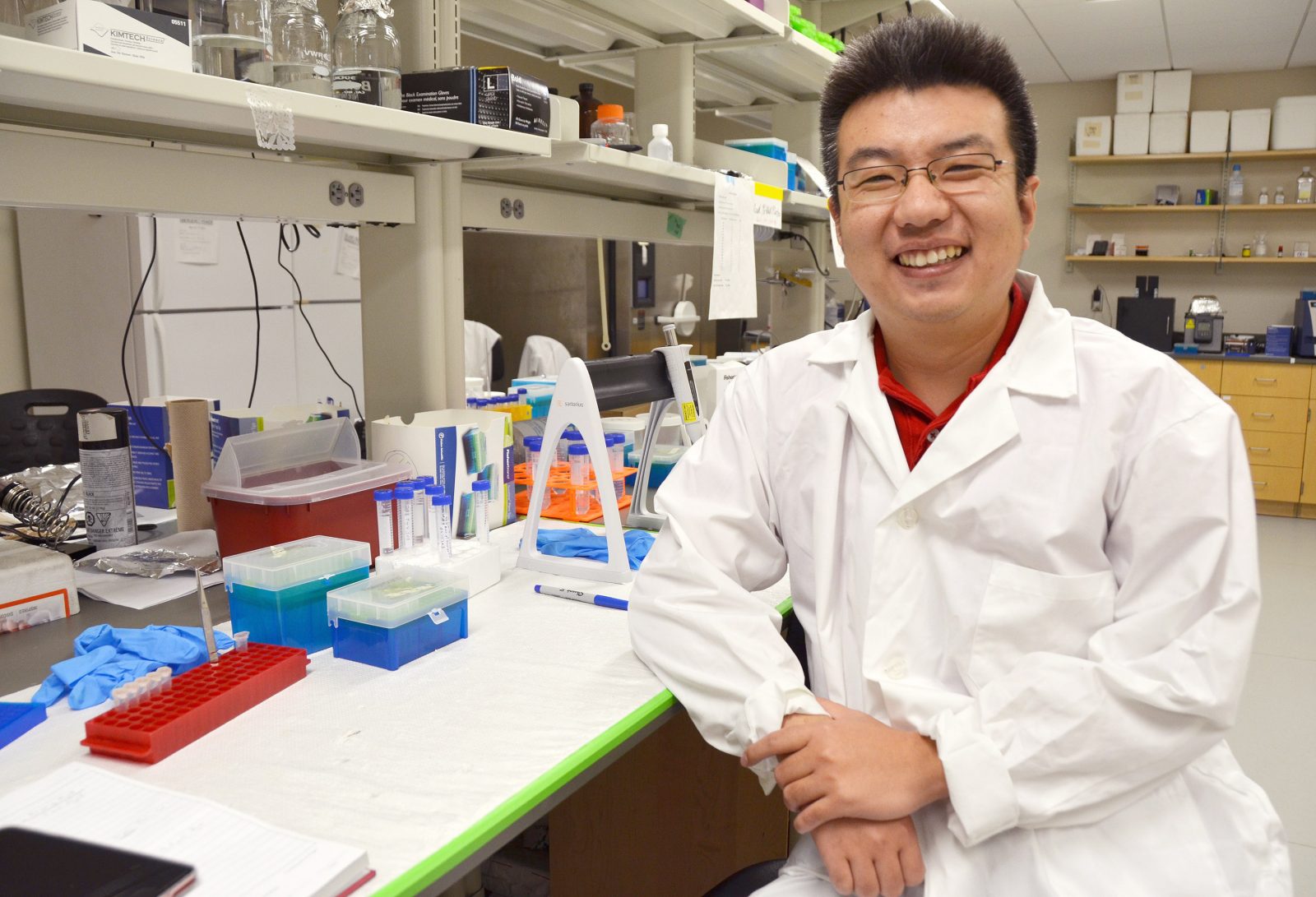 Assistant Professor of Chemistry Feng Li, who recently returned from China as a participant on the provincial government’s Ontario-China Young Scientist Exchange Program, is setting up a research partnership with the Shanghai Institute of Applied Physics in the area of bionanotechnology.

The Brock University Assistant Professor of Chemistry is laying the groundwork for a partnership with the Shanghai Institute of Applied Physics at the Chinese Academy of Science.

Li was there recently as a participant of the Ontario-China Young Scientist Exchange Program, a provincial government initiative aiming to develop international research and commercialization activities between Ontario and Chinese organizations.

The program is affiliated with the Ontario government’s Early Researcher Award, which Li received earlier this year for his research on the use of DNA nanotechnology to detect diseases.

Breakthrough developments through Li’s research include a microscopic robot that has the potential to identify drug resistance to tuberculosis faster than conventional tests, a paper-based device that can reveal the presence of illness from DNA samples, and a three-dimensional, microscopic nanomachine that can detect diseases in a blood sample within 30 minutes.

Li and his team also created a tool that can potentially be used in a future computer that will be made out of DNA. Their technique, called allosteric DNA toehold, has been integrated as a key component in one of the world’s most advanced DNA neural networks by the Qian lab at the California Institute of Technology.

During his three-week visit to China, Li worked in the laboratory of Professor Chunhai Fan, who has done breakthrough research in the areas of biosensing, biophotonics, and DNA nanotechnology and computation.

“I never knew him before, but I’d been reading a lot of his work, since he’s a very big name in my field,” says Li. “When I heard about this exchange program, his name came to my mind. I contacted him to see whether I could have the opportunity to visit his lab for a couple of weeks.”

Li’s initial research proposal centred on how to modify a sophisticated piece of an electrochemical sensor in Fan’s lab to be able to detect proteins, which would assist Li’s disease detection work.

But, once at the lab, Li became fascinated with Fan’s work on ‘DNA origami,’ a technique where long strands of DNA are folded into three-dimensional structures with different shapes.

Li learned to create nano-sized tubes that can potentially be injected into the body to enable targeted, efficient delivery of drugs.

As an example of how this would work, Li refers to the problem of chemotherapy killing healthy cells alongside cancerous ones.

“Imagine a box that you can load drugs into,” he says. “Those boxes would only open when there’s a cancer cell. Cancer cells have specific cell-surface proteins or lipids. You use these as a key to unlock the three-dimensional structure. Then you will only deliver drugs to cancer cells over the healthy cells.”

Li is also interested in using the DNA origami technique for diagnostic purposes. One example is the DNA Shape ID. Scientists in Fan’s lab created three-dimensional shapes out of DNA strands and paired these shapes with certain illnesses.

“They can label different diseases with different shapes, like a triangle or a square,” says Li. “The scientists use them to determine if the DNA bears mutations. It’s very cool how you can use DNA structures for diagnostic purposes.”

Li says he has set up a collaboration with researchers in his lab at Brock, Fan’s lab at the Shanghai Institute of Applied Physics, and researchers at McMaster University.

Calling Li a “rising star in DNA nanotechnology,” Fan says he and Li “almost instantly found that we had a lot of mutual interests in research” when they met.

The Ontario-China Young Scientist Exchange Program was set up two years ago to develop long-term research collaborations between Ontario and Chinese institutions and to encourage the development of leadership skills among participants.

Li was among seven researchers province-wide to be accepted to the program this year.