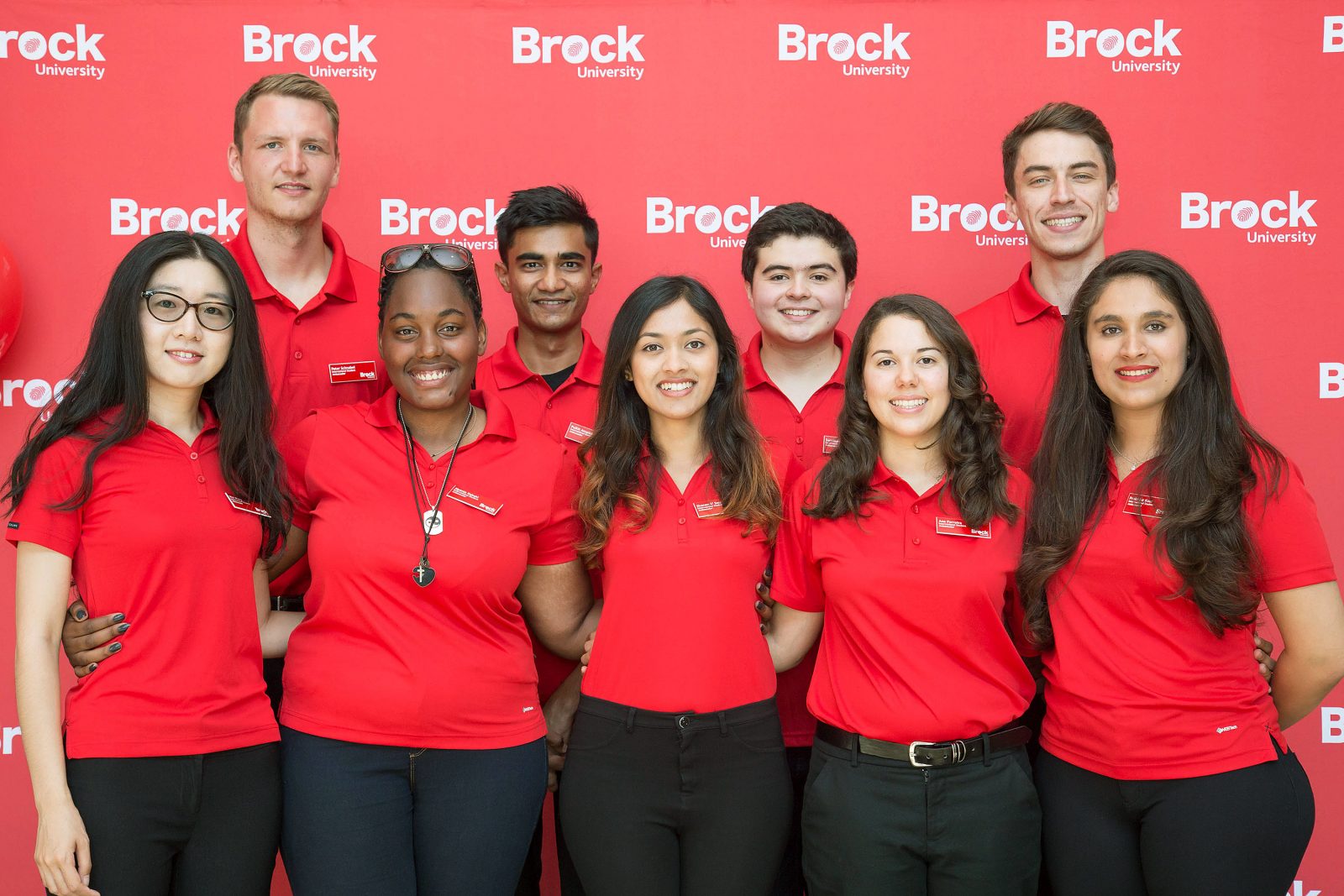 They come from countries around the world and despite their varying backgrounds, they share one important common bond: a strong sense of Badger pride.

This select group of international students exemplify the mission and vision of Brock, as a result of high academic achievements and/or community engagement, both on and off campus.

Throughout the school year, the student ambassadors work with Brock International to share with prospective students from around the world what life is like at the University, both inside and outside of the classroom. They will spend time describing life in Niagara, why they chose Brock and how it has helped them to prepare for their upcoming career.

Returning as an International Student Ambassador, and captain of the Brock men’s volleyball team, Marcelo Correa’s leadership shines on and off the court. Currently in his third year as a Biotechnology student, Correa is keeping his options open with areas of interest in the wine industry, pharmaceuticals, genetics and research in molecular biology. He regards being an International Student Ambassador as a great honour that allows him to not only represent the University while out in the world, but also Brazil while on campus.

With her home country already linked to St. Catharines, Ana Ferreira felt a natural connection to Brock University. St. Catharines has been known as the twin city to Port of Spain in Trinidad and Tobago since 1968. Now a second-year Kinesiology student, Ferreira is returning as an International Student Ambassador and is deeply involved in the campus community. A member of multiple clubs, and an athletic trainer for Brock’s cross country and track and field teams, she plans to use her Brock degree as a starting point for a career in Physiotherapy.

A native of Nairobi, Kenya, Myanla Kabaki is the group’s only first-year student. She came to Brock to study Political Science because of the program’s integrated co-op program. With her degree, she’s hoping her experience can land her in organizations such as the United Nations or the African Union. While she’s still getting used to her new surroundings, she’s actively finding ways to get involved by joining Brock’s Vinyl Society because of her love of music, and signing up for the Big Sister Mentorship program.

Hailing from the Kingdom of Bahrain, a small Middle Eastern island off the coast of Saudi Arabia, Prabhjot Kaur considers her decision to come to Brock one of best she’s ever made. A fourth-year Biomedical Sciences student, Kaur has been a volunteer teaching assistant in anatomy labs, assisting second-year students with understanding and appreciating human anatomy and physiology. Kaur plans to continue her passion in the medical field by applying to medical school after graduation.

While studying for a semester at Kansas State University in 2014, Pulkit Anupbhai Modi realized the impact a North American education would have on his future career.  He chose to study at Brock University and Goodman School of Business because the MBA program offered greater flexibility in completing his studies, and a specialization in Business Analytics. Now in his second year, Modi regards his most memorable experience thus far as participating in John Molson School of Business International Case Competition, where his team won four out of five cases. Modi also interned with Mercedes Benz Financial Services, and serves as Vice-President of the Graduate Business Council.

An exchange opportunity more than seven years ago changed Santiago Negret Rey’s future forever. After living in New Brunswick for six months, he was charmed by local culture and friendly people. When deciding where to study, Rey was swayed by Canada’s stance as one of the top countries in the world for game development, and its reputation as a top destination to live and study. Returning as an International Student Ambassador, Rey is now in his second year in Game Development, and has high hopes for turning his passion into a career.

Peter Schnabel, a 6-foot-7 starting middle on the men’s volleyball team, came to Canada from his home country of Germany because he felt it was one of the best places in the world to combine his academic and athletic passion. The second-year Psychology student was immediately captivated with Brock’s community spirit at his first home game of the season last year, and has grown fond of his teammates and friends he’s made since arriving in Canada. His connection to the community has only continued to grow since.

Shanen D’Souza’s advice for new international students: “Get integrated into the Brock community.” As a member of the Brock Marketing Association, Brock Power to Change, Goodman DECA and Brock Conversation Partner program, as well as her role as an International Student Ambassador, she has taken this advice to heart. As she heads into the final semester of her Business Administration degree, D’Souza is planning on settling down in Canada. She has hopes of returning to Johnson & Johnson, where she received work experience through her Brock co-op placement as a supply chain analyst.

A second-year MBA student, Wei Wang is from Tianjin, a major port city in northeastern China. Representing the largest international demographic at Brock University, Wang is an integral part of this year’s ambassador team. While living far away from home was one of the biggest challenges she faced last year, Wang has come to love the local culture and pace of life in St. Catharines. After completing her MBA, she hopes to continue living in Canada while gaining experience in the field of accounting.

Recipients of the International Student Ambassador scholarship have their international tuition fees reduced to the domestic rate — a discount of about $16,000.

Students interested in sharing their Brock passion with the world can apply in early 2019 to be an International Student Ambassador for the 2019-20 academic year. Information about the next round of applications will be posted online as it becomes available.