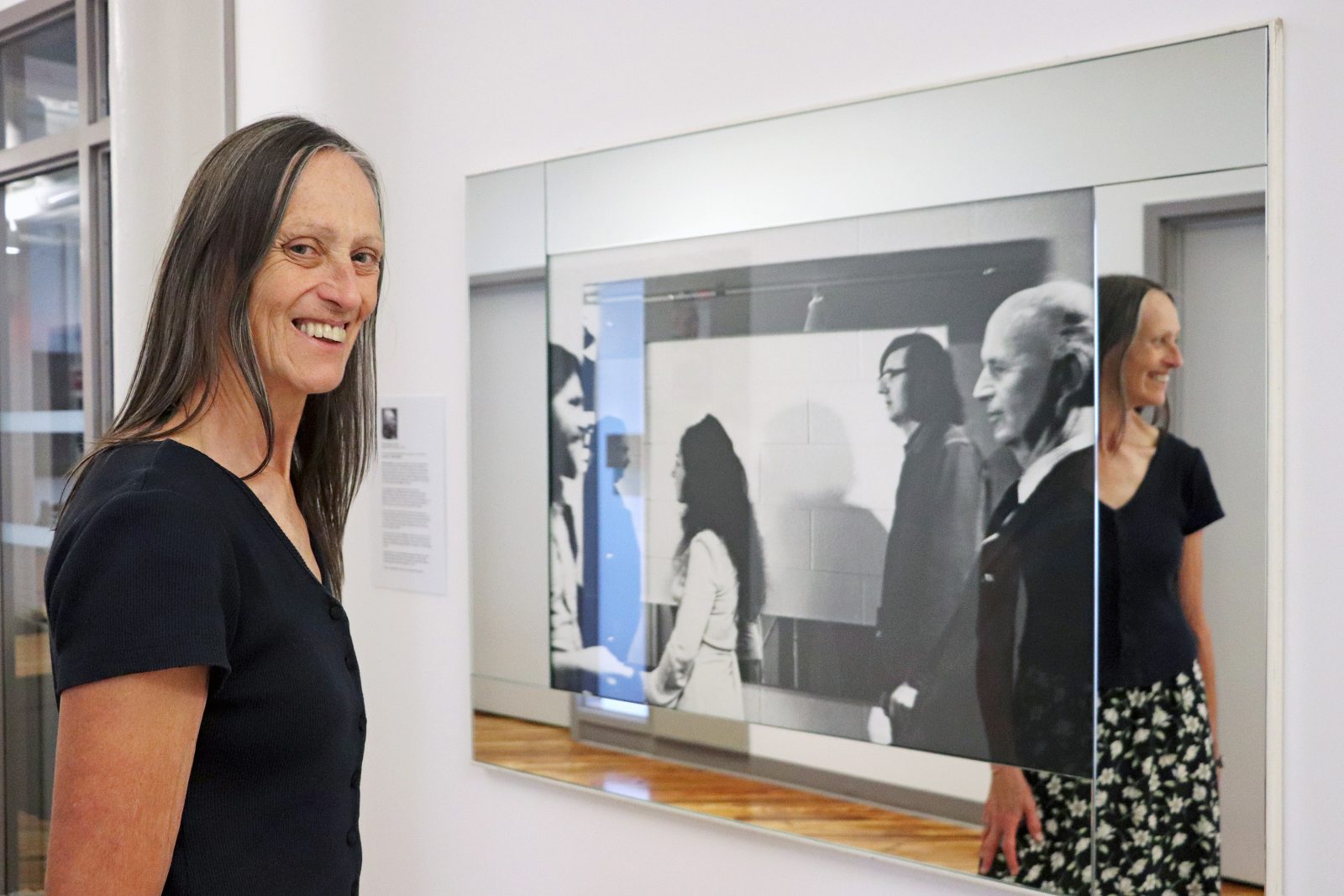 Lesley Bell (BA '88), former Learning Commons Co-ordinator at the Marilyn I. Walker School of Fine and Performing Arts (MIWSFPA), has been researching the history of Michael Snow’s Timed Images, Frame Three piece that has recently found a new home at the School.

Just in time for Culture Days this weekend, the work of internationally regarded artist Michael Snow has found a new home at the Marilyn I. Walker School of Fine and Performing Arts (MIWSFPA).

Previously installed in the C-Block of Brock’s Mackenzie Chown Complex, Snow’s Timed Images, Frame Three, can now be viewed on the second floor of the Walker School.

“Having the work of such a culturally significant artist on display in our building promotes interaction and connection between our two Brock campuses and with the community,” said MIWSFPA Director Elizabeth Vlossak. “The piece inspires us to remember our history, both as a university and a city, as we look ahead to the future.”

Framed within a mirror, the photograph features a staged image of then-President James A. Gibson, Professor Ian Shaw, Brock student Anna Bernardo, Professor Peter Peach (seen as a mirror reflection) and Students’ Union Vice-President Fred Ford. They are photographed walking in front of a mirror frame that still hangs on the wall in D-Block today.

Frame Three is part of a larger installation that Snow created for Brock University during the construction of the Mackenzie Chown Complex in 1972. Working with architect Raymond Moriyama, Snow created a number of multimedia pieces that interacted with one another in various locations around the building.

When the installation was active, a video camera placed across the hallway captured footage of anyone walking by Frame Three, and then transmitted that footage to a live-feed video monitor further down the hallway.

Lesley Bell (BA ’88), former Learning Commons Co-ordinator at the MIWSFPA, has been conducting extensive research on the installation. She said the work was ahead of its time, with technological elements that undoubtedly sparked the interest of students on campus at that time.

Bell is also working with a videographer to complete a documentary about the work, its rich history at Brock and its commentary on the sweeping changes many universities were undergoing at that time.

Scott Henderson, Associate Professor in Communication, Popular Culture and Film, has also done his own research on the installation, even taking his students on popular “Snow Walks” to introduce them to Snow’s work and foster discussion on the ideas explored within his pieces.

“In this photo, there is a beautiful layering of people, and that’s reflective of the way that knowledge constantly builds and of its fluidity,” he said of Frame Three. “I imagine the work to relate to the notion of a student arriving with their preconceptions of who they are, who they will encounter and how that constantly changes. Their time is fleeting, but they have become part of the broader history, and whatever they said or did adds to the knowledge base of the University in the future.”

Although the installation no longer functions as it once did, Henderson argues that it remains as relevant today as when it was first installed.

“We could be disappointed by the decay of Timed Images, except that it is a piece about time and its impact on us,” explained Henderson. “The natural transformation of change is that the piece itself has decayed, which works exactly with what the piece wanted to say. It invites that discussion about our history and having it on display at the MIWSFPA allows it to still function the way it was meant to function, to remind us that time is constantly moving.”

Snow is an internationally-regarded filmmaker, sculptor, visual artist and musician who has been the recipient of numerous awards including the Order of Canada and a Doctor of Laws degree from Brock University in 1974.

His work has been presented at museums and galleries around the world and is perhaps best known locally for Flight Stop at the Toronto Eaton Centre (1979) and The Audience (1988-89) at the SkyDome (now Rogers Centre).

Timed Images, Frame Three is currently installed in the MIWSFPA, with viewings taking place Friday, Sept. 28 to Sunday, Sept. 30 from 1 to 5 p.m., as part of Culture Days, and any time during normal school operating hours.