Dramatic Arts grad’s road to success was paved at Brock 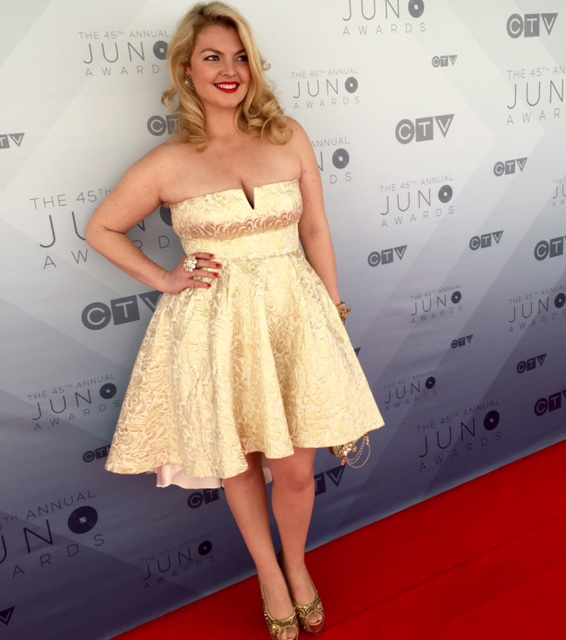 Jacelyn Holmes (BA ’08) is set to release her debut album this winter and credits her success in the arts to her start in Brock’s Department of Dramatic Arts.

Among many things, Brock University taught Jacelyn Holmes (BA ’08) to defy her anxiety and be fearless.

The Dramatic Arts alumna learned to harness the confidence she embraced in University and now uses it each time she takes the stage to sing.

With the 10th anniversary of her graduating class set to be celebrated at Brock Homecoming this weekend, Holmes couldn’t help but reminisce about her artistic journey and how her Brock degree helped her achieve her career goals.

“It’s been an interesting ride so far and it’s funny to recount where I am and what I’ve done,” said Holmes, who studied at the Marilyn I. Walker School of Fine and Performing Arts before its move to the new downtown St. Catharines facility.

After graduating, Holmes was involved in theatre productions and was cast in various television spots before realizing that her true passion was in the music industry.

She has since landed gigs playing for the Toronto Jazz Festival, Canadian Music Week, the Niagara Grape and Wine Festival as well as booking international tours and showcases in Europe, Central America, the Caribbean, Asia and the U.S. She will be releasing her debut album in February, with a Christmas album to follow later next year.

“Now that it’s all coming together, I’m excited to continue honouring my commitment to learning through art and creativity and discovering myself as an artist,” she said.

An actress since childhood, her lifelong dream had always been to work in theatre and film — making the Dramatic Arts Department at Brock a perfect fit.

“It was an amazing education,” she recounted. “At Brock, you spend four years constantly putting it all out there, learning to be vulnerable and available to failure in an environment where you can thrive with help from acclaimed professionals. It’s quite a beautiful thing.”

Although her passion for the craft was evident, struggling with Attention Deficit Hyperactivity Disorder (ADHD) and anxiety made focusing on schoolwork extremely difficult.

“When I got to university, it became very apparent that I was not working at the same level as other people,” she recalled. “That brought out insecurities, shame and questions of why I was even there. I felt like I was drowning.”

Holmes credited the support she received from Brock’s A-Z Learning Services for helping her overcome those barriers.

“Feeling empowered to go and ask for the help that I needed or extra time on tests really allowed me to excel,” she said. “The staff at the Learning Centre were patient and taught me how to apply all that I had learned to my schoolwork and in the real world.”

Her grades went up, she was awarded scholarships and would even receive the Spirit of Brock Award — given to the student who embodies the spirit of Maj.-Gen. Sir Isaac Brock, by inspiring other students — in 2008.

Department of Dramatic Arts Chair Joe Norris congratulated Holmes on all of her success and her ability to channel the skills she developed with her degree to find success in the arts and life overall.

“Professors in the Department of Dramatic Arts aspire to inspire students in the entire range of their creative endeavours,” he said.

Holmes agreed that her theatre background has been key to her success as a performing vocalist.

“It was because of my theatre background that I am able to perform; it taught me to be fearless,” she said. “Some people would think that someone with anxiety would have a hard time getting up on stage, but it is my escape — and that feels awesome.”

The Brock University Alumni Association works diligently, she adds, “to keep alumni informed about what’s happening at the University, and we work to connect alumni with each other for personal and professional gain.”

This year’s Homecoming celebration takes place from Friday, Sept. 21 to Sunday, Sept. 23 with a variety of activities happening on campus and in the community.