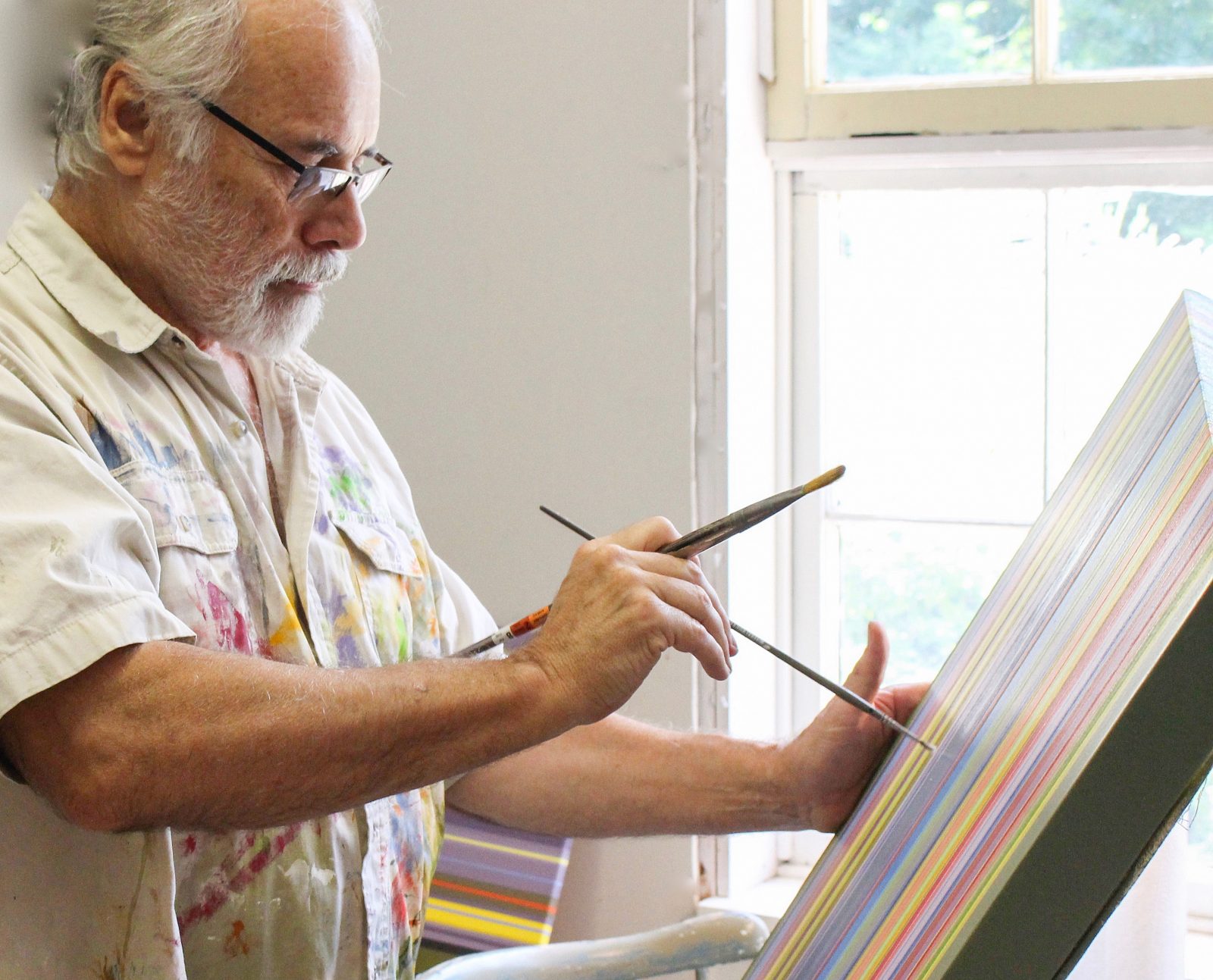 Professor Murray Kropf is exhibiting his most recent collection of paintings in Three to Eight, an exhibition opening Tuesday, Sept. 4 in the VISA Gallery at the Marilyn I. Walker School of Fine and Performing Arts. The paintings are being sold to support student scholarships. (Photo by Lorraine Zandvliet)

When Brock Associate Professor Murray Kropf puts brush to canvas, his inspiration tends to stem from an academic problem he is currently working through.

In Three to Eight, his new exhibition opening Tuesday, Sept. 4, Kropf challenged himself to create movement in a piece by using only tone, hue and intensity and painting on square canvases with a very limited colour palette.

“I was trying to find a better way to teach students about colour theory,” he said of the work that he began last year in early fall. “I was looking for a way to create a harmonious and structured composition that is asymmetrical, but still balanced, using only a palette of between three to eight colours.”

The result was a series of paintings — the first purely abstract of his career — that Kropf will be selling to fund visual arts scholarships for students in the Marilyn I. Walker School of Fine and Performing Arts (MIWSFPA).

While he is mainly a location and still-life painter, Kropf said he welcomed the change of pace for this work.

“It went better than I thought it could,” he said of his first stab at abstractionism. “It’s always a problem for painters approaching a canvas, because it’s blank, but everything that came out of this was a surprise and that was lovely. It was a refreshing thing to do.”

He also said the process will “further inform his teaching” in the future, making him more “appreciative” of what can be accomplished with a limited range of colours.

Assistant Professor Amy Friend, Chair of the VISA Gallery Committee, said this is the first time a professor has hosted a solo show as a fundraising initiative since she has been involved with the gallery operations.

“To showcase the work that Murray, one of our senior professors, accomplishes behind-the-scenes in his studio, is really important,” she said. “It also shows the way that art can support community, the generosity of our relationship with our students and the ongoing need to fund student studies.”

Kropf, who has been teaching at Brock for more than 30 years, said simply that it was “time” to give back to the students and the institution he has been connected to for so long.

“I want to show my gratitude to my students, to my colleagues, and to the university because I have been very lucky to work here, and I’ve enjoyed it a great deal,” he said. “I’ve always wanted to contribute to awards for students because I’ve been a student and I know how badly support is needed.”

Three to Eight will be displayed in the VISA Gallery, located on the first floor of the MIWSFPA, beginning Tuesday, Sept. 4, with an opening reception taking place Friday, Sept. 7. The reception will run from 4 to 7 p.m., also in the gallery, and is free and open to the community. The VISA gallery is open to the public Tuesday to Saturday from 1 to 5 p.m.

All proceeds from the sales of Kropf’s pieces will be donated to scholarships for students in Visual Arts immediately after the exhibition.