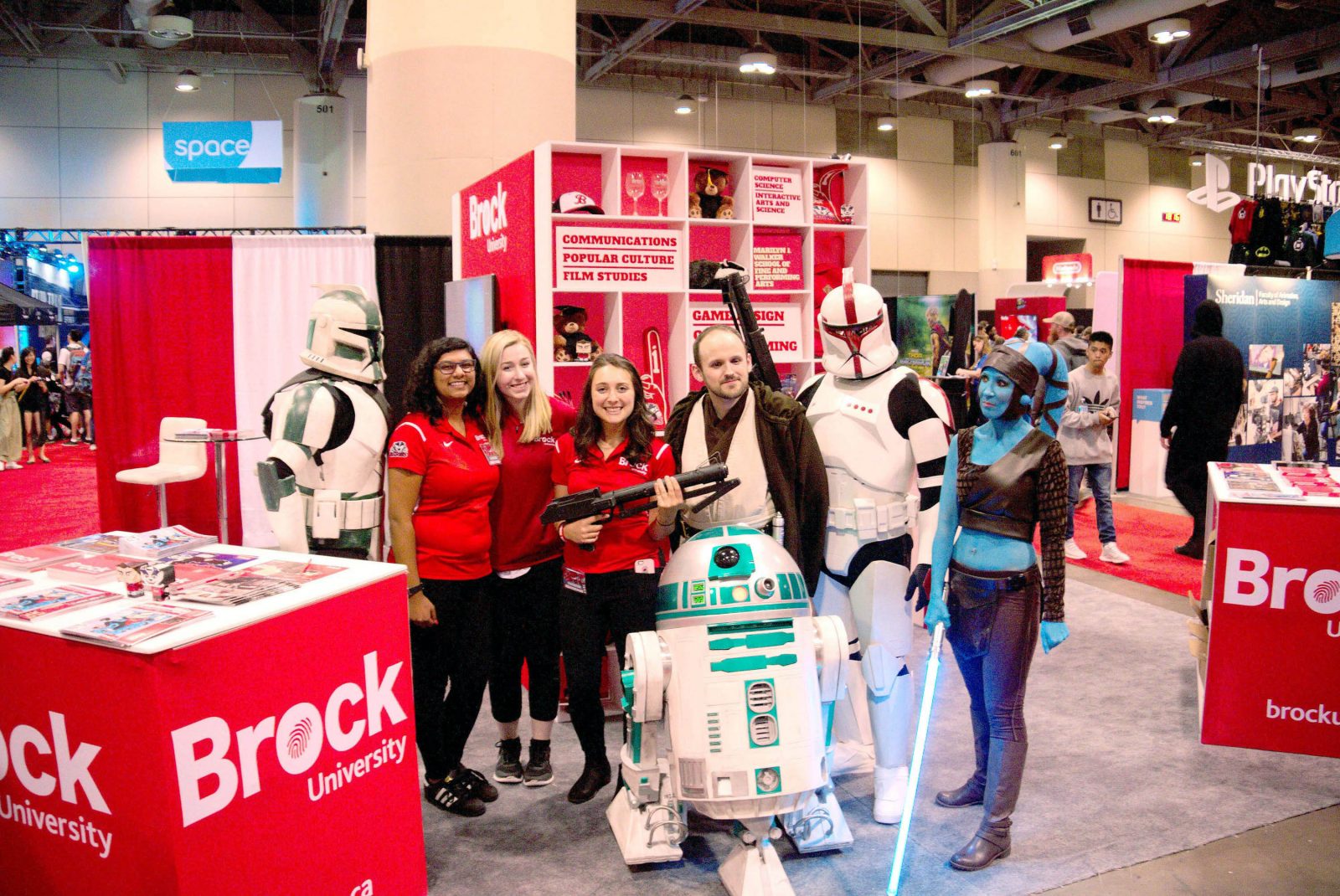 Brock's booth was a popular stop at the 2017 Fan Expo Canada. The University's recruitment team returns to the Metro Toronto Convention Centre Aug. 30 to Sept. 2.

Boomer the Badger has again found his place among Batman, Superman and other comic classics.

Brock’s mascot will join the University’s recruitment team as they highlight the institution for the third consecutive year at Toronto’s popular Fan Expo Canada, which runs Thursday, Aug. 30 to Sunday, Sept. 2.

The largest comics, sci-fi, horror, anime and gaming event in Canada, Fan Expo annually draws more than 100,000 people from around the world to the Metro Toronto Convention Centre. The vast majority of show-goers — many of whom arrive in full costume — are high school or early post-secondary-aged people, making them Brock’s target audience.

The University’s event booth will focus on programs and departments at Brock that are more likely to appeal to typical Fan Expo goers, such as the Marilyn I. Walker School of Fine and Performing Arts, Communication, Pop Culture and Film, Computer Science, Game Design and Game Programming.

More than a dozen students and recent graduates from the Interactive Arts and Science (IASC) and GAME programs will also be on hand with their award-winning video games for people to try.

Both will be available for a test run by interested gamers.

“Sharing our students’ work through events like Fan Expo and Niagara Falls Comic Con gives the Centre for Digital Humanities an opportunity to showcase that Brock students do fun, challenging and interesting things as part of a degree here,” says Justin Howe, the centre’s Project Co-ordinator. “However, the real win in many cases is giving students a chance to see an audience of all ages and interests engage with their creation.”

The University’s Makerspace will also have its time in the spotlight during the four-day event.

“We want people to see the innovative things happening on campus,” said Makerspace Co-ordinator Tabitha Lewis. “We’ll be talking about how we’re expanding and how we’re creating accessibility for students, staff and community members.”

A 3D printer will be housed at Brock’s booth, used by visitors to create comic characters.

“It’s a good way to segway into talking about what’s available at the University and the different activities you can participate in in conjunction with your degree,” Lewis said.

Fan Expo Canada is the first of two major recruiting events in Toronto for Brock. The Ontario Universities’ Fair will also be held at MTCC Sept. 28 to 30 and is a hugely important event that draws all 21 Ontario universities.

To increase Brock’s presence during and between both events, Marketing and Communications is again launching a major advertising campaign that will see Brock branding dominate the Skywalk between Union Station, the MTCC and Rogers Centre.