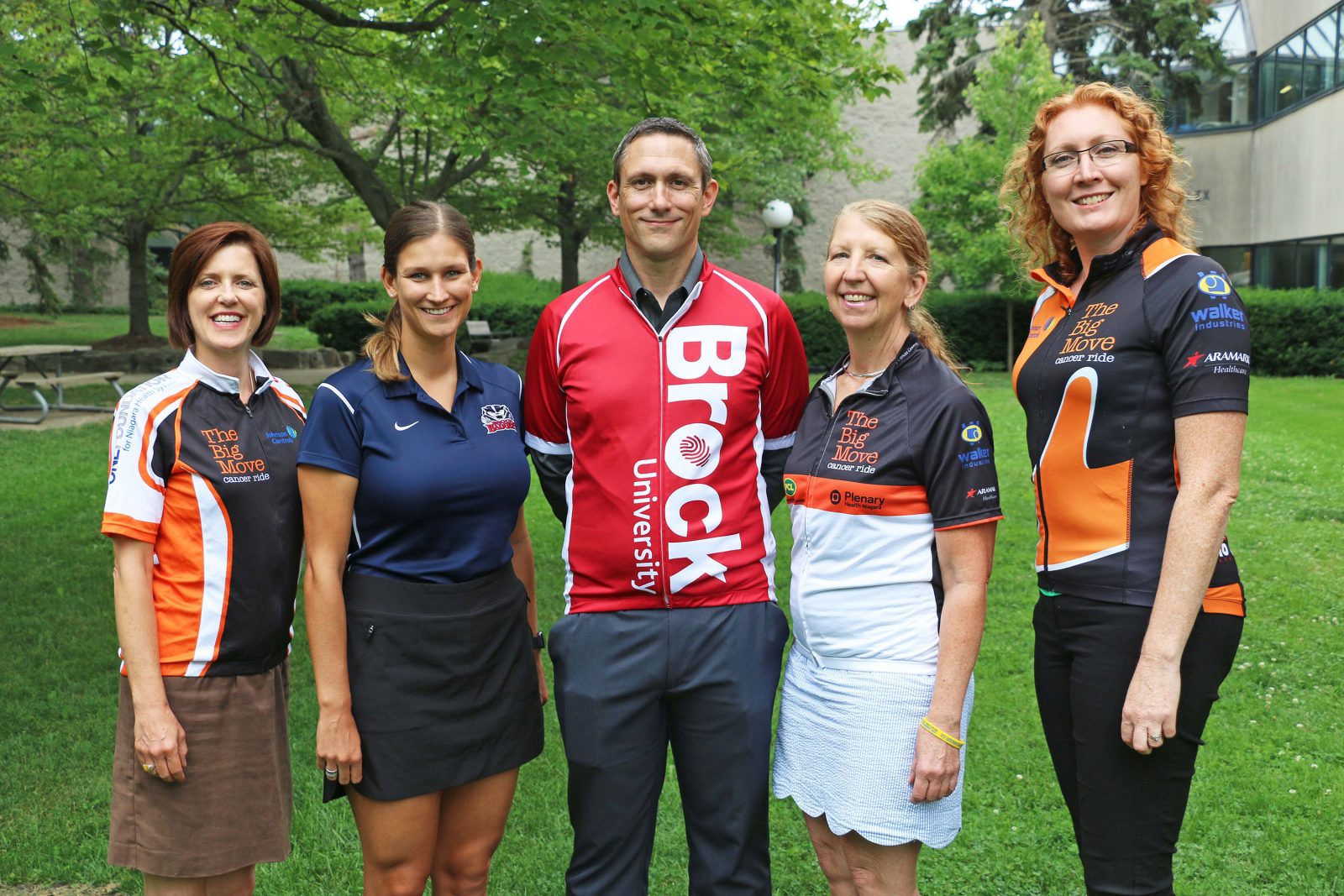 After two of her closest friends were stricken with cancer, Ethna Bernat witnessed the difficult road to recovery.

In a show of unity and support, the Brock employee was part of a group that banded together to drive the two friends to Hamilton for frequent treatments.

“For one of my friends, it was an awful and painful process to get him there and back every single time,” said the associate administrative director in the Faculty of Education’s Concurrent Programs.

It was an experience that resonated with Bernat, who has since thrown her support into a fundraiser benefiting Niagara’s local cancer centre.

She is one of several Brock employees riding with the Brock Cyclones in the Big Move Cancer Ride on Sept. 9 at Club Roma in St. Catharines. The non-competitive cycling event features a 25-kilometre, 50-km or 100-km route. Proceeds from the fundraiser will support patients of the Walker Family Cancer Centre in St. Catharines with diagnostic care, treatment and education.

Bernat stressed that people don’t need to be avid cyclists to join the event.

“The first time I joined the Big Move was also the first time I had ever done a ride like this,” she said. “I did 50 kilometres on my old little mountain bike. I didn’t have a road bike or any special equipment. I still don’t have clips and pedals. I wasn’t fast, but I did it.”

Karen Dancy, International Recruitment Officer in International Market Development, will be riding in event for the first time. She’ll be tackling her first 100-km route in honour of three of her grandparents who passed away from cancer.

“There’s a statistic that says 2,500 people in Niagara are diagnosed with cancer every year — that really impacted me,” she said.

This will be Elna Mayberry’s ninth time participating in the ride. The scheduling assistant in the Office of the Registrar said she cycles the 100-km route for the sweet treats given out along the way.

“One of the volunteers makes the most delicious chocolate chip cookies every year. She’s usually at the 75-km support station, but I would ride 200 kilometres for her cookies,” she said.

Support stations set up along each of the three route options will include snacks, music, water, portable washrooms and people cheering. A pasta lunch with salad and meatballs is served after the ride.

“The event isn’t timed, so even if you don’t need a break you stop anyways,” said Mayberry. “I like to thank and chat with the volunteers I haven’t seen since last year. Plus the route is simply gorgeous. It’s nice to stop to take it all in.”

Josh Sekel, Senior Project Manager and IT Consultant with Enterprise Solutions, has been cycling the 100-km route for three years and has raised more than $10,000. Last year, he was inducted into the Platinum Peddlers’ Club, which recognizes fundraisers who have gone above and beyond.

“It’s 90 per cent thanks to Brock employees. The community is always so supportive of the event,” he said.

Team Captain Karl Thorp, Senior Platoon Supervisor, and John Suk, former Chair of the Brock University Board of Trustees, are also part of the Platinum Peddlers’ Club. It was under Thorp’s leadership as team captain in 2016 that the Brock Cyclones were also inducted into the club, having collectively raised more than $50,000 over the years.

There’s still time to join or donate to the Brock Cyclones. The event is also in need of volunteers. Visit the Big Move Cancer Ride website for more information.

For those interested in easing into a longer ride than they’re used to, guided training rides take place at Rockway Community Centre in Lincoln every Thursday night.