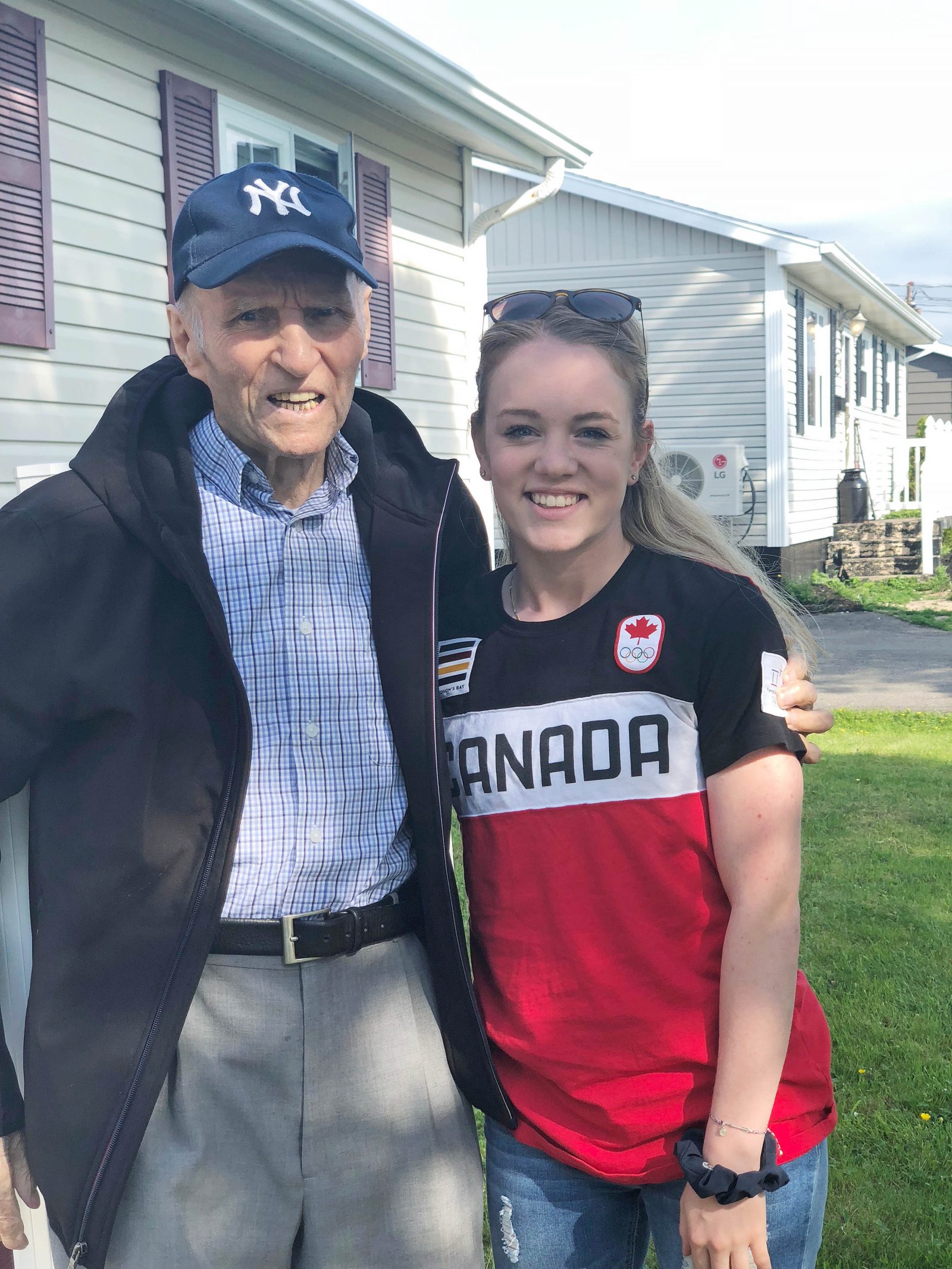 As a stream of relatives entered the house, 97-year-old Marshall Desveaux had one thing on his mind.

“Where’s Katie?” he asked as each person came into the room.

It had been four years since the New Waterford, N.S., resident had last seen his granddaughter, Brock University student Katie Desveaux, and the pair had a lot to catch up on.

Katie was surprised by the Brock University Students’ Union this spring when her Wellness Wish was granted and a plane ticket to the east coast purchased in her name. 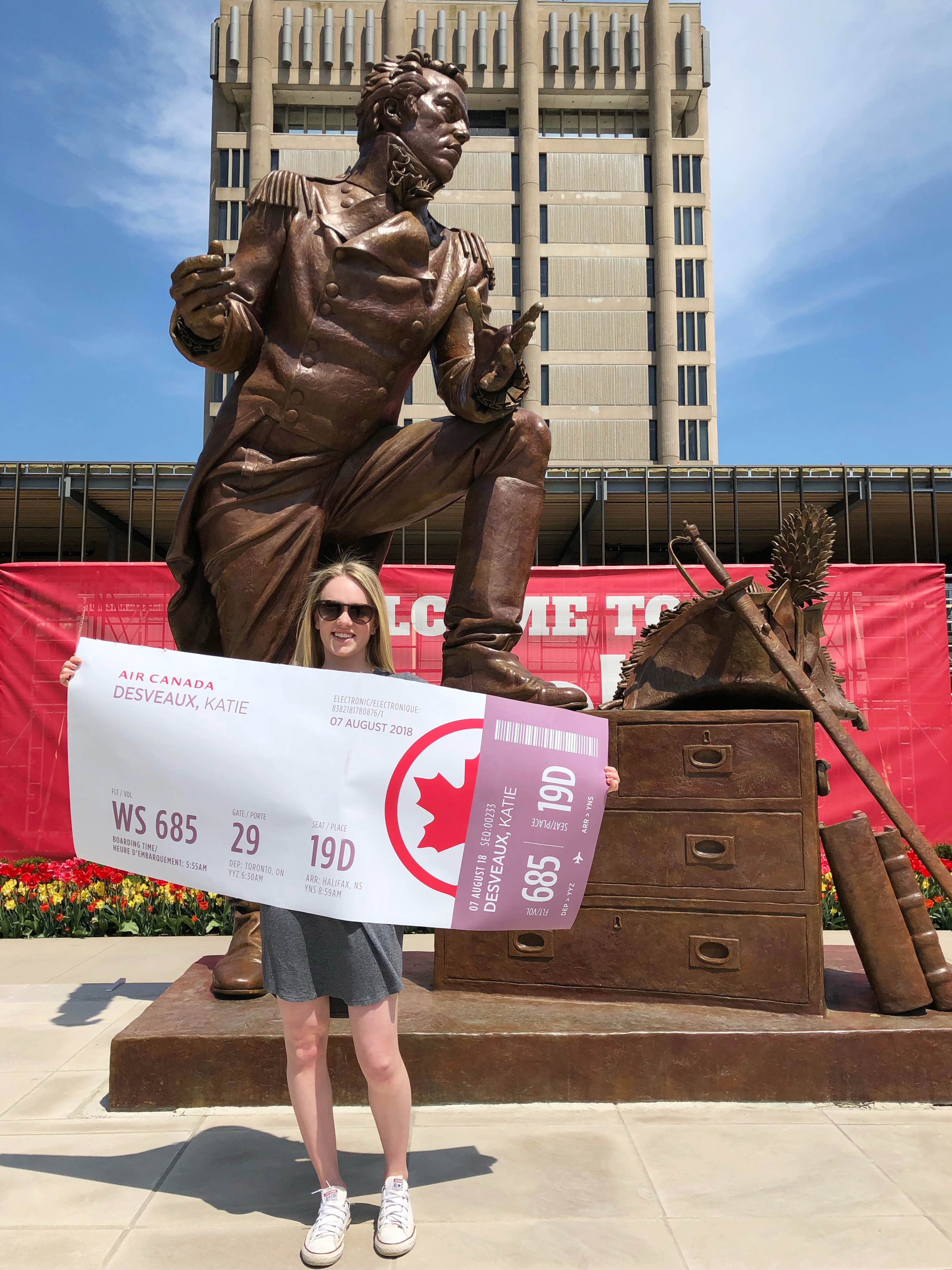 Started in 2016, the BUSU-run Wellness Wishes initiative aims to ease the minds of students during exams by having them fill out a card with a wish before seeing them granted later in the school year.

While Katie’s ask was bigger than most, there was nothing the 2018 Sport Management graduate from Toronto wanted more than to visit her grandfather in Nova Scotia. And it was a request BUSU simply could not ignore.

Though the two speak on the phone often, the busyness of school and work had prevented Katie from being able to make the trip east to visit her grandfather for several years. But thanks to a gap in her schedule, and the generous granting of her Wellness Wish, she hopped on a flight bound for Halifax on June 27.

“He was ecstatic to see me and had a huge smile on his face,” Katie said upon her return July 4. “He gave me a long hug and then we sat down right away and chatted about school and work while he ate his tea and cookies.”

The duo made sure to make the most of their time together, taking on activities impossible through their phone chats.

“We went for strawberry ice cream at his favourite place, The Bayside, every day after dinner,” said Katie. “He can eat whatever he wants because he’s been fit his entire life after serving in the Second World War and later working as a mailman.”

In addition to the daily pilgrimage for frozen treats, Katie also spent time embracing her grandfather’s passion for sports.

“We watched a ton of baseball,” she said. “He cheers for the Yankees and Blue Jays, so there were lots of games on.”

During her grandfather’s downtime, Katie caught up with a dozen other relatives she has in Nova Scotia and took in some local scenery including the Cabot Trail and vast ocean views.

While the pristine landscape was memorable, it was the time she spent chatting with her grandfather that she will forever cherish the most.

“I know I want to see him as much as I can now,” she said. “I updated him on how the rest of the family is doing in Toronto and there was a lot to catch up on in my life too.”

As she prepares to start a new job as a Brock University recruitment officer in a few weeks, Katie reflected on how the trip perfectly wrapped up the student portion of her time at Brock.

“The trip meant the world to me because I never thought I would end up getting something like that granted,” she said. “It felt like it was meant to be. Brock has done so much for me and this was such a nice way to top my career off. Wellness Wishes is a great campaign for students and I hope it continues for years to come.”

The Wellness Wishes initiative has granted hundreds of wishes to Brock students since 2016 and will return again next year. In addition to the Nova Scotia trip, some of the many wishes granted over during the 2017-18 school year included a new pair of Converse shoes, hoodies from the Campus Store, a pizza party at Isaac’s Bar and Grill and a yoga membership.