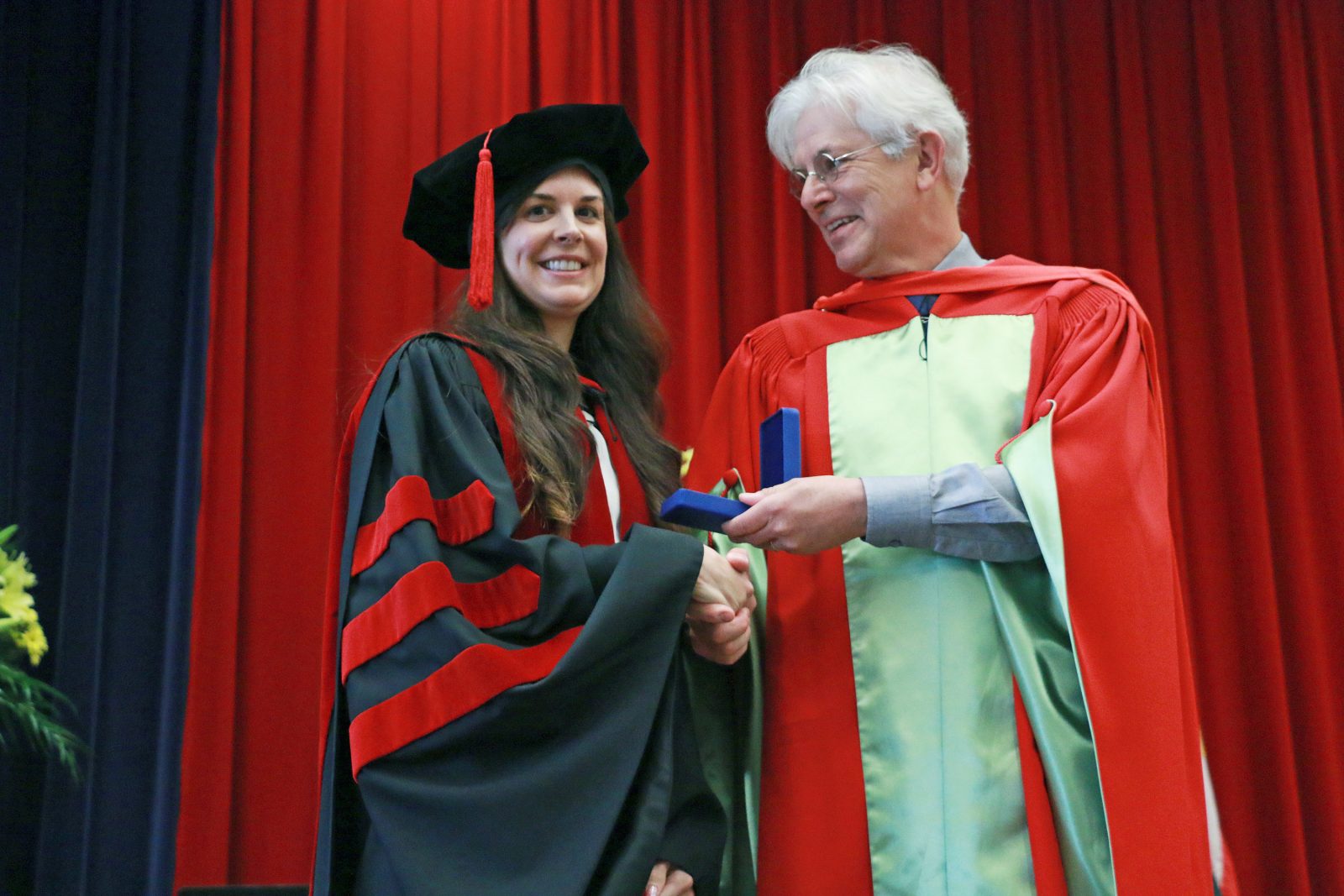 Michelle Przedborski’s eleven-year journey at Brock has been filled with significant milestones.

In 2011, she became the first in her family to graduate from university after earning her Bachelor of Science degree.

Last October, she crossed the stage at Brock’s Fall Convocation with her PhD in Theoretical Physics — after working her way to a 97.25 per cent average, no less.

And on Friday, June 8, the 29-year-old Niagara Falls native returned to her alma mater to be honoured for her efforts.

On the final day of Brock’s Spring Convocation, Przedborski returned to the stage to receive the Governor General’s Gold Medal Award, presented to the graduate student with the highest academic average in the 2017-18 academic year.

“Receiving this award is an enormous honour,” said Przedborski (BSc ’11, MSc ’13, PhD ’17). “It is an amazing feeling to know that all of the time and effort that I put into my studies and research really paid off.”

“I was immediately hooked on the material,” said Przedborski. “He is a great teacher and he radiated excitement and passion at every lecture. I wanted to be as passionate about something as he was.”

The switch paid off. She found the material came to her naturally and that solving complex physics problems and mastering the work was very satisfying.

Przedborski also worked on two thesis projects with Physics Professor Bozidar Mitrovic, an experience that cemented her love of research. After graduating with an impressive 91 per cent average, she went on to pursue graduate studies.

As a graduate student, she quickly won the respect of her peers and supervisors.

“Michelle was consistently the best student in my classes,” said Kirill Samokhin, Physics Chair and Przedborski’s MSc thesis supervisor who recalled how her hard-work, inquisitive mind and extraordinary mathematical skills made her stand out.

Thankful for the opportunities and excellent education she received in the Department of Physics’ inclusive and innovative environment, Przedborski’s decision to pursue her PhD at Brock was an easy one.

“I loved being a part of the Physics Department,” she said. “I have had many great experiences over the years and I almost didn’t want to graduate because I didn’t want to leave. The faculty, staff and students are all great people.”

Working under the supervision of Physics Professor Thad Harroun, she found the freedom to pursue projects of her choosing, which paved the way for her to become an independent researcher.

Along with awards for her outstanding academic achievements, oral presentations and research, Przedborski also found time to jam with science professors and students in the rock band pH Six, as well as give back to the community. She served as a project leader and panelist for Scientifically Yours and as a workshop leader for Bridging Our World Through Science Aboriginal Science Camp. Both initiatives encourage youth to pursue education and careers in the field of science.

“It is an amazing feeling to know that you are fostering scientific interest in young students,” said Przedborski.

As a first-generation student, coming from a single-parent home, Przedborski understands how important financial support and outreach programs are to pursuing an education.

“I wanted to share my story with students so they would know that, regardless of their personal experiences, if they had a passion for science, then they should pursue it, work very hard and things will fall into place.”

Przedborski is now a postdoctoral fellow at the University of Waterloo conducting research on mathematical models of cancer. Having found her passion, her long-term goal is to become a university professor who conducts research that has a significant, positive impact on people’s lives.