Decades of commitment — to Brock, and each other 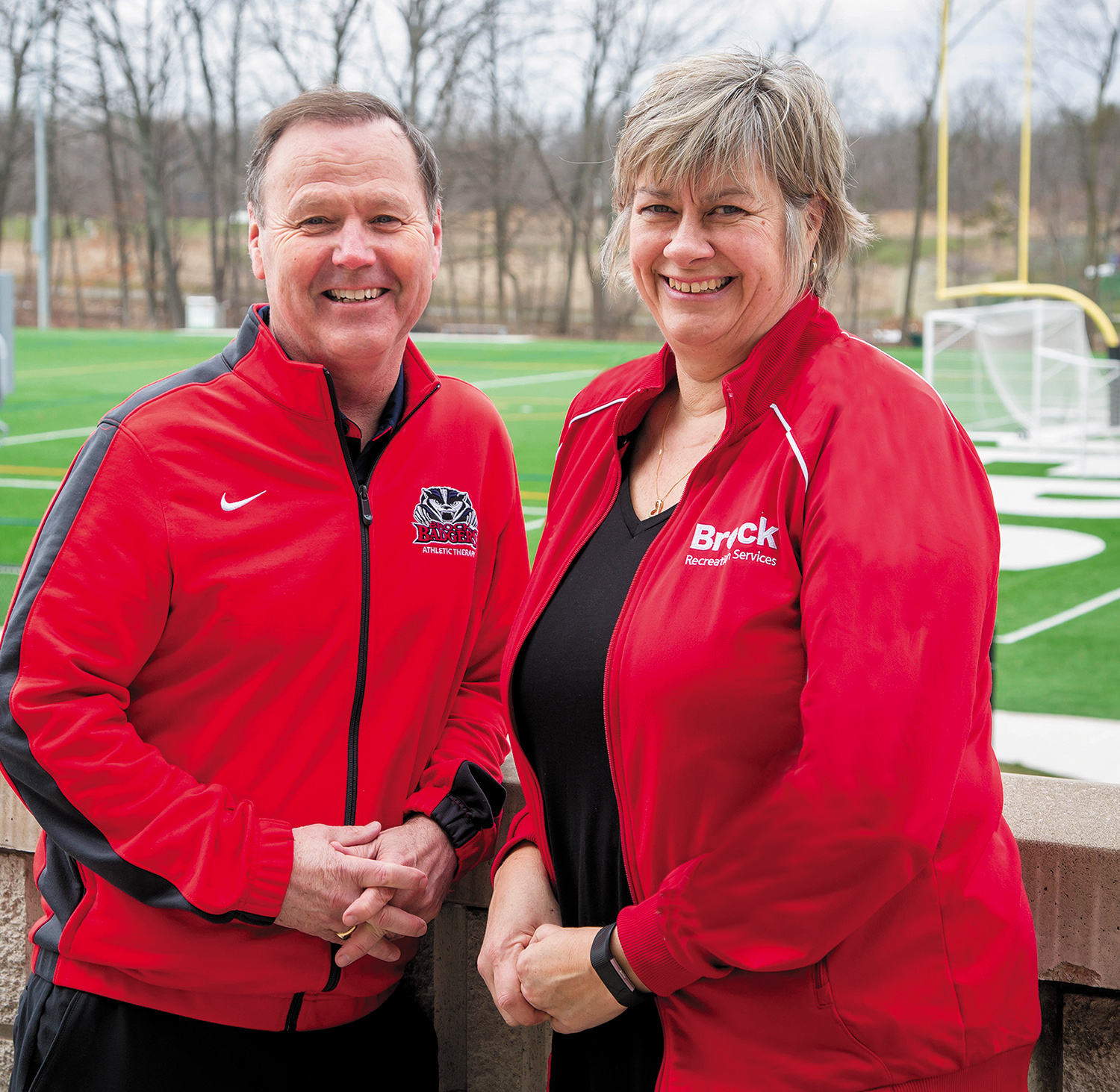 Joe Kenny and Karen McAllister-Kenny will be recognized during Homecoming weekend in September as Brock's 2018 Distinguished Alumni Award winners.

Peer out into the stands at any Brock Badgers game or onto the sidelines during intramural sports and you’ll likely catch a glimpse of someone from the Kenny family.

Just as sports and fans go hand-in-hand, Joe Kenny (MEd ’85) and Karen McAllister-Kenny (MEd ’97) have become synonymous with athletics and recreation on campus.

The married couple have spent decades helping to shape the athletic and recreational landscape at Brock University, supporting students to the best of their ability each step of the way. 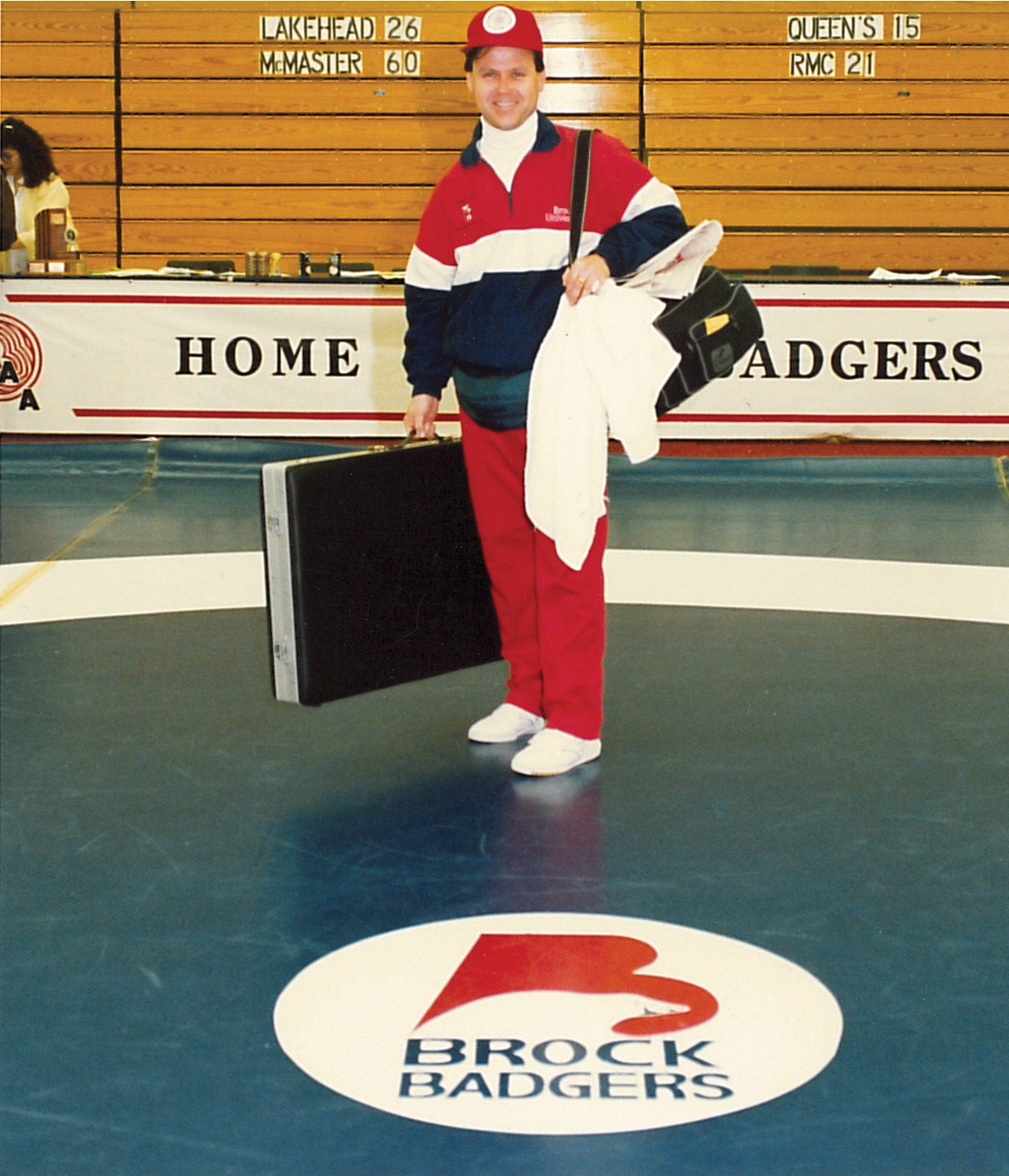 Joe Kenny stands in what is now the Bob Davis Gymnasium in the 1980s.

Karen, Brock’s Director of Youth Programs and Recreation, and Joe, Head Athletic Therapist and Manager of the Athletic Therapy Clinic, will be recognized for their longstanding commitment to the University during Homecoming weekend in September.

They will be the first joint recipients, and first married couple, to be honoured with the annual Distinguished Alumni Award by the Brock University Alumni Association. Joe and Karen each completed their Master of Education while working for the school.

In 1983, Karen learned of a job opening coaching Brock’s women’s volleyball team and threw her hat in the ring.

With time at Waterloo under both of their belts, Joe was asked if he knew the coaching prospect and he confirmed she would be a great fit.

When Karen started in the role shortly after, the two met face-to-face for the first time — with Joe realizing he had mistakenly recommended the wrong person for the job.

“Joe’s not good with names,” Karen says with a laugh as she shares one of the couple’s fondest memories. “He thought I was one of my volleyball teammates. That’s how I got here.”

As luck would have it, the mix-up was a win for the University.

Karen quickly excelled in the role, adding intramurals to her roster of responsibilities the following year and recreation four years later. In her 10 years coaching volleyball, she led the women’s team to two OWIAA West Division wins and two Ontario bronze medals.

She played a pivotal role in growing student and community recreation opportunities on campus, helping to create the fulsome offering available today.

Known for having a similar passion for athletics, Joe is often seen at weekend games supporting his student trainers and is no stranger to late-night emergency calls asking for help with an injured athlete.

“We often come back after hours or on weekends for needs that need to be met. We like to be there for the students,” Joe says.

Adds Karen, “Recreation and athletics is not a 9-to-5 job — you have to enjoy that.”

It was their love of sport, and of Brock, that ultimately united the pair not only in work, but also in life.

In their early years at the University, Karen and Joe’s paths crossed constantly.

“The reality was we attended a lot of varsity games for entertainment because that was a big part of our lives,” Joe says. “We were always at the games, often going out afterwards to share some fellowship with coaches, trainers and everyone else.

“We spent a lot of time together,” he says.

“You wore me down,” Karen quips.

The pair now have two grown children, Chris and Erin, who at an early age could also be found at various Brock sporting events showing their Badger pride. 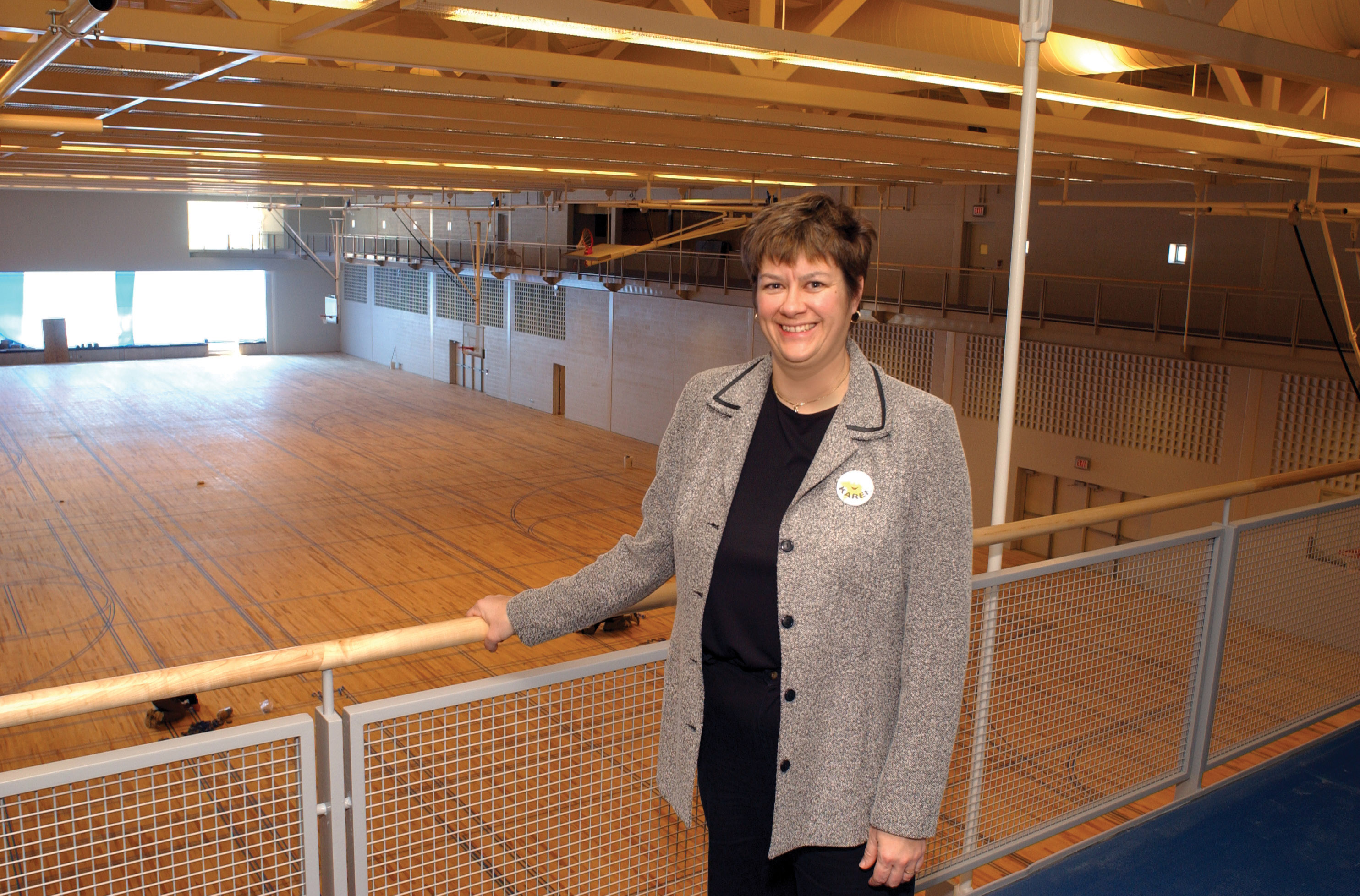 Karen McAllister-Kenny on the track above the Ian Beddis Gymnasium in 2002.

Over the years, Joe and Karen have been at the forefront of the evolution and expansion of the University’s athletics and recreation departments.

Throughout the many changes, their biggest motivator has remained the same — the joy of watching students succeed.

In his role, Joe oversees about 75 students, many of them student athletic trainers who are working in the field for course credit.

“When they tell me they’re going onto physiotherapy, chiropractic college, to be a paramedic or massage therapist, or taking another route, it’s so exciting to hear,” he says. “It means through their practical training and experiential learning they’ve gained an advantage that’s helped them decide their future. Deep down it says we’ve had a chance to help guide a person to a career and I think that’s tremendously rewarding.”

Joe’s face lights up as he talks about the directions his past students have gone in, whether to professional sports teams such as the Toronto Blue Jays and Ottawa Senators, or to successful health-care careers.

“They all got their start here thanks to our many really great professors,” he says.

Of the clinic’s 10 staff members, including doctors, therapists, physiotherapists, chiropractors and osteopaths, eight are Brock graduates.

“I take a lot of pride in that,” Joe says. “To me, it says we’re doing something right somewhere along the line.”

Brock’s recreation department also employs a handful of Brock grads, in addition to hundreds of students who act as the lifeguards, program leaders and fitness instructors.

Campus recreation is a key part of the university experience, whether students are participating in or facilitating programs, Karen says.

“It’s all about the connections you make with people. It helps to make you feel like you’re part of something.”

The couple were both surprised and humbled to learn their efforts have led to the alumni honour, to be bestowed at the Alumni Recognition Reception on campus Sept. 22.

“Few people have had the pleasure and the privilege to work with young students as closely for as long,” Joe says. “It has been an amazing experience.”