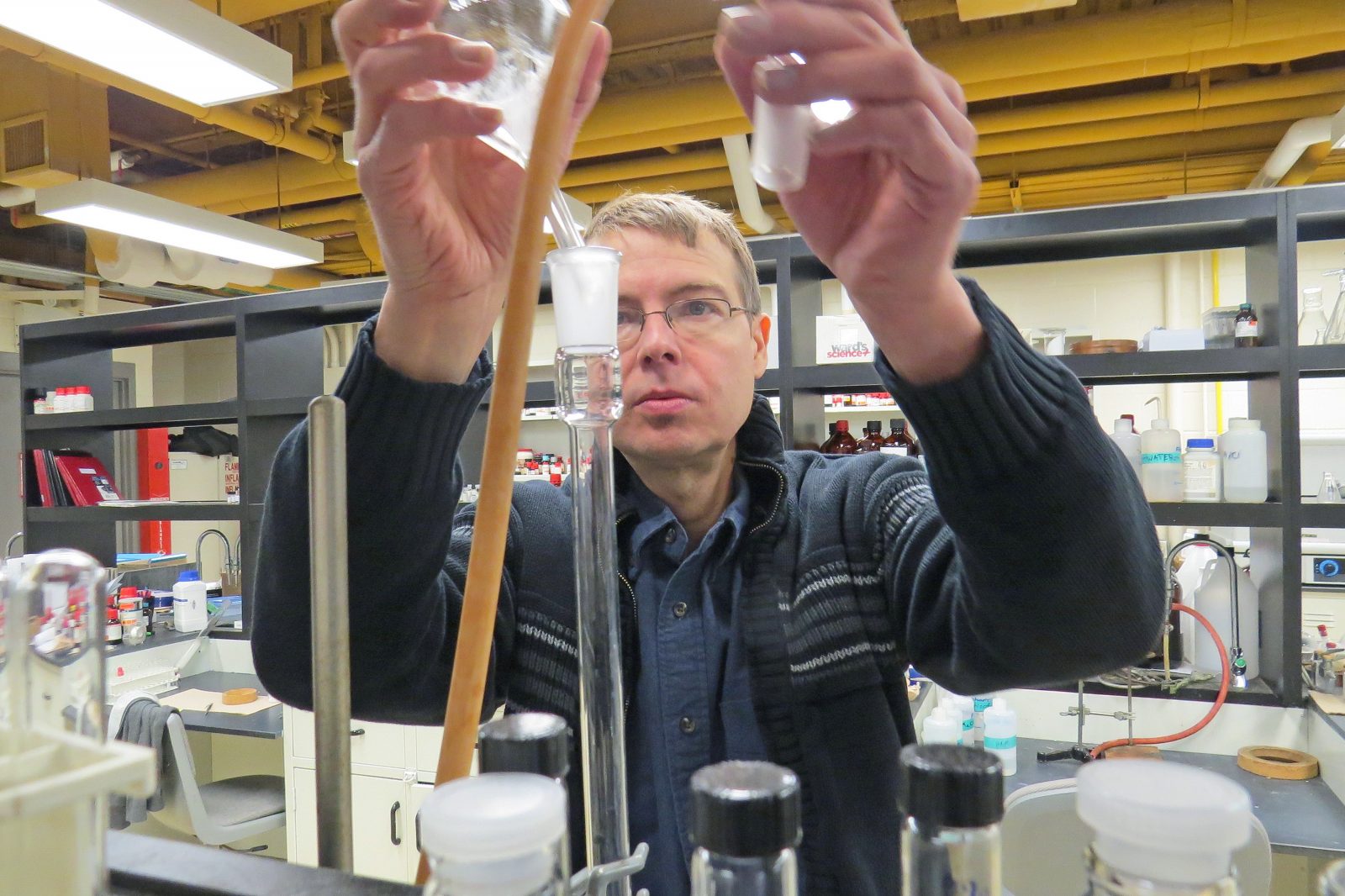 Switching from coal, oil and other fossil fuels to energy derived from plants and animal waste is a crucial climate change strategy — but one businesses are still learning how to find value in.

While governments offer incentives for entrepreneurs to become biofuel leaders, the payoff may not be as attractive as continuing to extract and sell the fossil fuels that contribute to greenhouse gases which cause global warming.

He and his team have partnered with a Welland-based biodiesel firm to boost the value of a specific area of the company’s biodiesel production.

“One way of combating the unbalanced market share of biodiesel versus fossil fuel resources is to take materials from their process that might be considered waste or lesser value materials and increase their value by making them into other desirable compounds,” says Dudding.

Glycerin, a clear, odourless liquid that tastes sweet, is used in a large variety of products, including medicines, cosmetics, resins, detergents, plastics and processed food.

Most biodiesel companies are already converting their crude glycerin into refined glycerin for use in these and other products as a way of earning extra income.

“It would require a huge amount of capital expenditure here at the plant for us to tap into these products, and there are already strong players in the market,” says Patrick Godbout, Engineering Project Manager at Atlantic Biodiesel.

“In order for us to compete with them, we need to develop a unique, value-added product that would give us a niche in an already existing market.”

With funding from the Natural Sciences and Engineering Research Council of Canada, as well as the Ontario Centres of Excellence, Dudding, postdoctoral fellow Roya Mir and graduate student Katie Dempsey are exploring ways to create a new product from the company’s glycerin.

Crucial to the creation of this new product is a process called catalysis, which occurs when a substance — called a catalyst — is added to speed up a chemical reaction. The chemical reaction does not destroy that substance.

“I had an idea that we could actually use small nanoparticles as catalysts,” says Dudding. A nanoparticle is a highly-mobile, sub-microscopic natural or human-made object that has many different properties. It is used in a range of products such as food packaging, flame retardants, batteries and medicines.

The nanocatalysts that Dudding and his team developed use oxygen and operate at room temperature.

“This is ideal for industry. You want processes that don’t require a lot of energy,” he says. “The big thing is that, overall, our nanoparticles are very effective at making the target molecule we want.”

The Brock-Atlantic Biodiesel research team is now identifying a specific high-value product that can be manufactured from the glycerol using the catalytic process that the team developed.

They plan to announce this new value-added product in the next 12 to 18 months.

“The research partnership has been going well,” says Godbout. “Not only have we utilized the partnership on the product development side, but we’ve utilized Brock’s facilities a few times to do other research work. It’s been a good, healthy relationship.”

Dudding says part of what motivates his research is the desire to develop industries and create jobs in Niagara while also providing teaching and training opportunities for students.