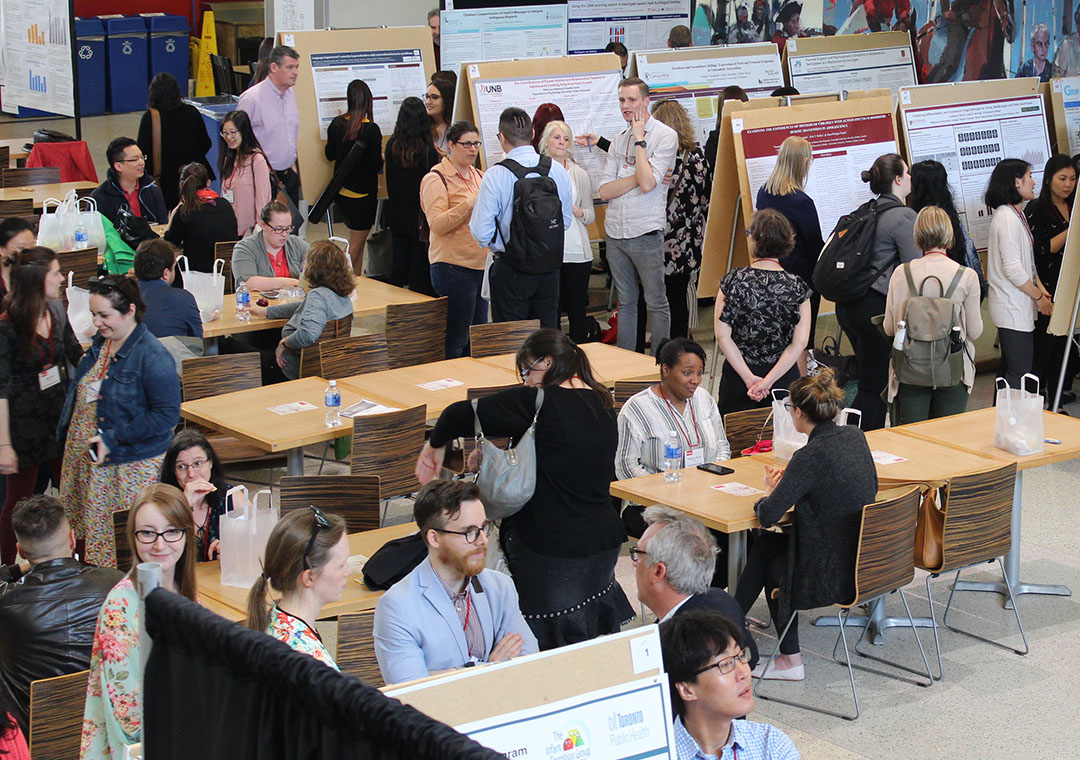 The Market Hall buzzed with conversation as attendees of Development 2018 enjoyed lunch while perusing the many poster presentations on display.

The event ran May 3 and 4, welcoming to campus more than 420 researchers, from undergraduate and graduate students to post-doctoral fellows and seasoned professors.

Brock’s own developmental psychology researchers were well represented among the conference presenters, which is unsurprising as they were collectively ranked third in impact across Canadian institutions according to a peer-reviewed study produced by Brock graduate students in 2016.

Based on an external review committee’s evaluation, Psychology PhD student Ann Farrell won the award for Best Student Talk for her role in presenting “Risky Environments and Exploitative Personality: A Social-Ecological Analysis of Adolescent Bullying,” a paper she jointly co-authored with Anthony A. Volk, Associate Professor in Brock’s Department of Child and Youth Studies, and Tracy Vaillancourt of the University of Ottawa.

“There is a lot of strong developmental psychology research being conducted at Brock,” says conference organizer and Associate Professor Angela Evans.

The Development conference, which began in 2010, takes place every four years. This was Brock’s first time hosting the event.

The conference’s peer-reviewed program included paper symposia, invited symposia, poster sessions, instructional workshops and keynote addresses from two leading scholars in the field ­— Stephen Suomi, of the National Institute of Health, and Jenny Jenkins, the Atkinson Chair of Early Child Development and Education and Director of the Atkinson Centre at the University of Toronto,

Suomi, whose work has been foundational for developmental psychologists, spoke on “behavioural, biological and epigenetic consequences of differences in early social experiences in primates.” His talk presented rigorous scientific results while delighting the audience with photos of the newborn monkeys he studies.

Jenkins received this year’s Pickering Award for Outstanding Contributions to Developmental Psychology in Canada. She then gave an address called “Emotion Dysregulation, Family Interaction and the Prevention of Child Psychopathology,” highlighting the importance of the child’s environment on their successful development.

The conference featured a networking event for postdoctoral fellows and evening receptions that showcased Niagara culture with live music and local food trucks.

Development 2018 was organized by the Department of Psychology’s Evans and Teena Willoughby, with support from Caitlin Mahy, Catherine Mondloch and Liz Shulman, and administered by Jayne Morrish in the Centre for Lifespan Development Research and Development.