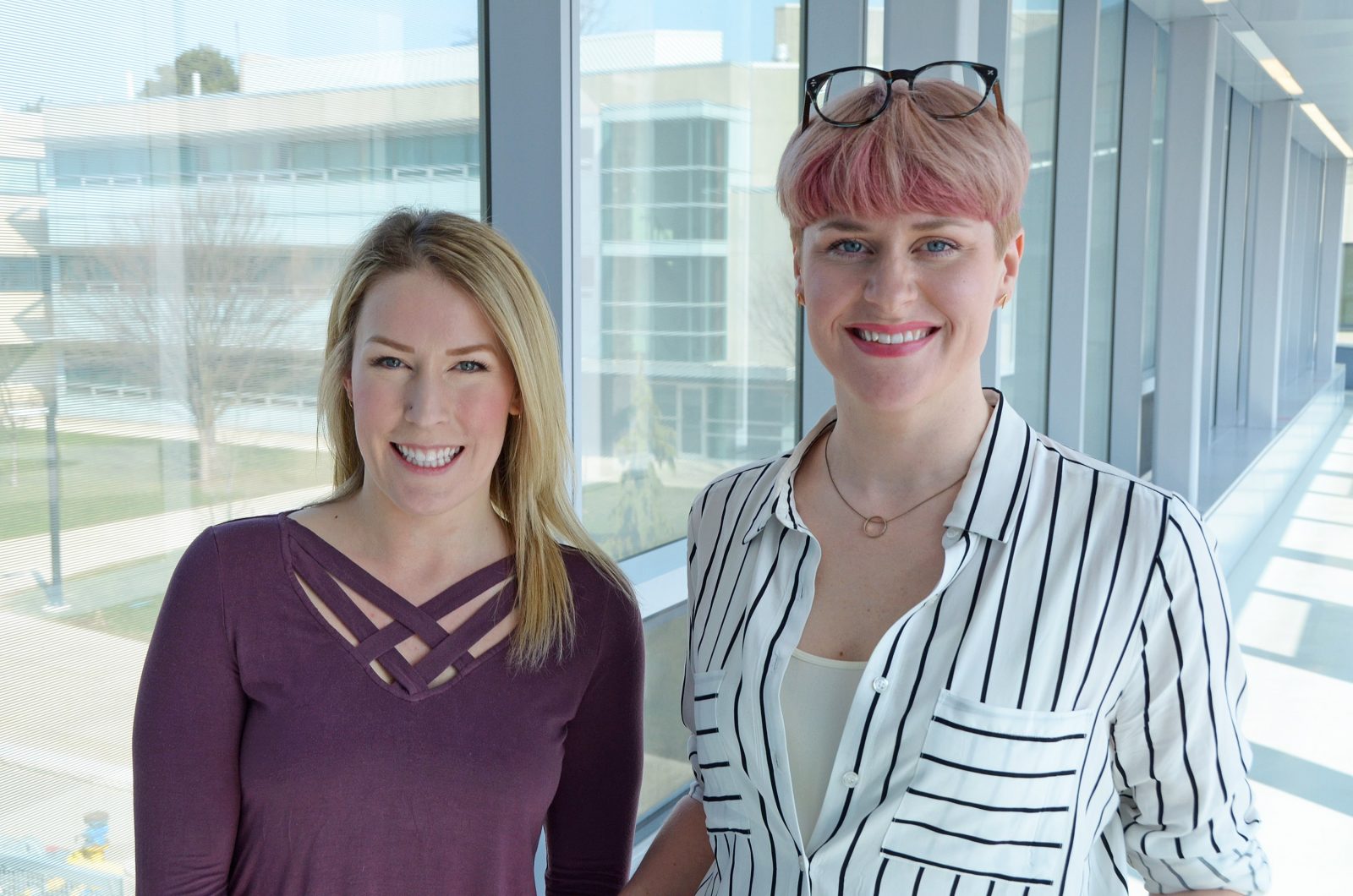 Brock student researchers Aly Bailey, left, and Candace Couse are among 25 finalists in the Social Sciences and Humanities Research Council of Canada’s The Storytellers video contest.

Body image research looking at negative perceptions and illness has earned two Brock University graduate students each a spot in the finals of a national research video contest.

Candace Couse and Aly Bailey are among 25 finalists in the Social Sciences and Humanities Research Council of Canada (SSHRC)’s The Storytellers video contest.

In addition to each receiving a $3,000 prize, the Brock students will join 23 other finalists from universities across Canada at the Congress of the Humanities and Social Sciences 2018 on May 28 in Regina, Sask., where they will give presentations before a panel of judges. Five students will then be chosen to present at SSHRC’s 2018 Impact Awards ceremony.

The Storytellers contest challenges post-secondary students to share SSHRC-funded research, conducted by either themselves or their supervisor, in a three-minute video or 300-word submission to show Canadians how social sciences and humanities research is affecting lives, the world and the future for the better.

“As a researcher, finding an innovative way to share your project with a general audience is very important,” says Diane Dupont, Interim Dean of the Faculty of Graduate Studies. “SSHRC Storytellers has provided a national platform for students to share the importance of their work.

“I am so proud of Candace and Aly for their success in this contest,” says Dupont. “To have not one, but two entries in the Top 25 shows that Brock graduate students are involved in exciting and globally relevant research and have the ability to translate that research into a form that brings to life the work for a non-technical audience.”

Couse, a PhD candidate in the Faculty of Humanities, researches visual representations of illness in the arts and medical sciences, looking at how Western understandings of death and dying confine people to narrow definitions of illness and health.

“All bodies of all abilities are in constant states of degeneration and regeneration,” she says.

Couse’s video opens by asking, “What does it mean to be sick?”, pointing out that illness can be marginalizing for people when the “sick” body is grounded in categories of malfunction and morality. “We come to think of the sick person as bad or heroic,” she says.

“My research shows how visual representations of the sick body are produced by and co-produce our understanding of bodies and illness,” Couse says. “It’s a problem that causes real harm for sick people that can produce tension between self and body.”

Bailey, a PhD student in the Faculty of Applied Health Sciences, also focuses on body image in her research in a program to transform people’s negative body perceptions. In Western societies, she says, most people are dissatisfied with their bodies.

In her video, Bailey begins by introducing a character named ‘Rose’ who, heavily influenced by societal pressures, thinks she’s fat, ugly and hates her body. Viewers follow along as the woman learns about B.I.A.S., or Body Image Awareness Seminars, a SSHRC-funded positive body image program where researchers and participants work together to bring about body acceptance, appreciation and respect.

“We don’t have to buy into societal pressures to change our bodies and conform to these ideas of what our bodies should be like; everybody can have a positive body image instead of living in this negative state,” says Bailey.

She and Couse both praised The Storytellers contest for providing a platform to publicize their research.

“It’s incredibly important for me to be able to reach many people about our B.I.A.S. program that promotes a positive body image movement,” says Bailey. “This (contest) is the perfect platform for that.”

“My research has a lot to do with relational knowledge,” says Couse. “It’s important to get that research out there so people can interact with it and contribute to it.”