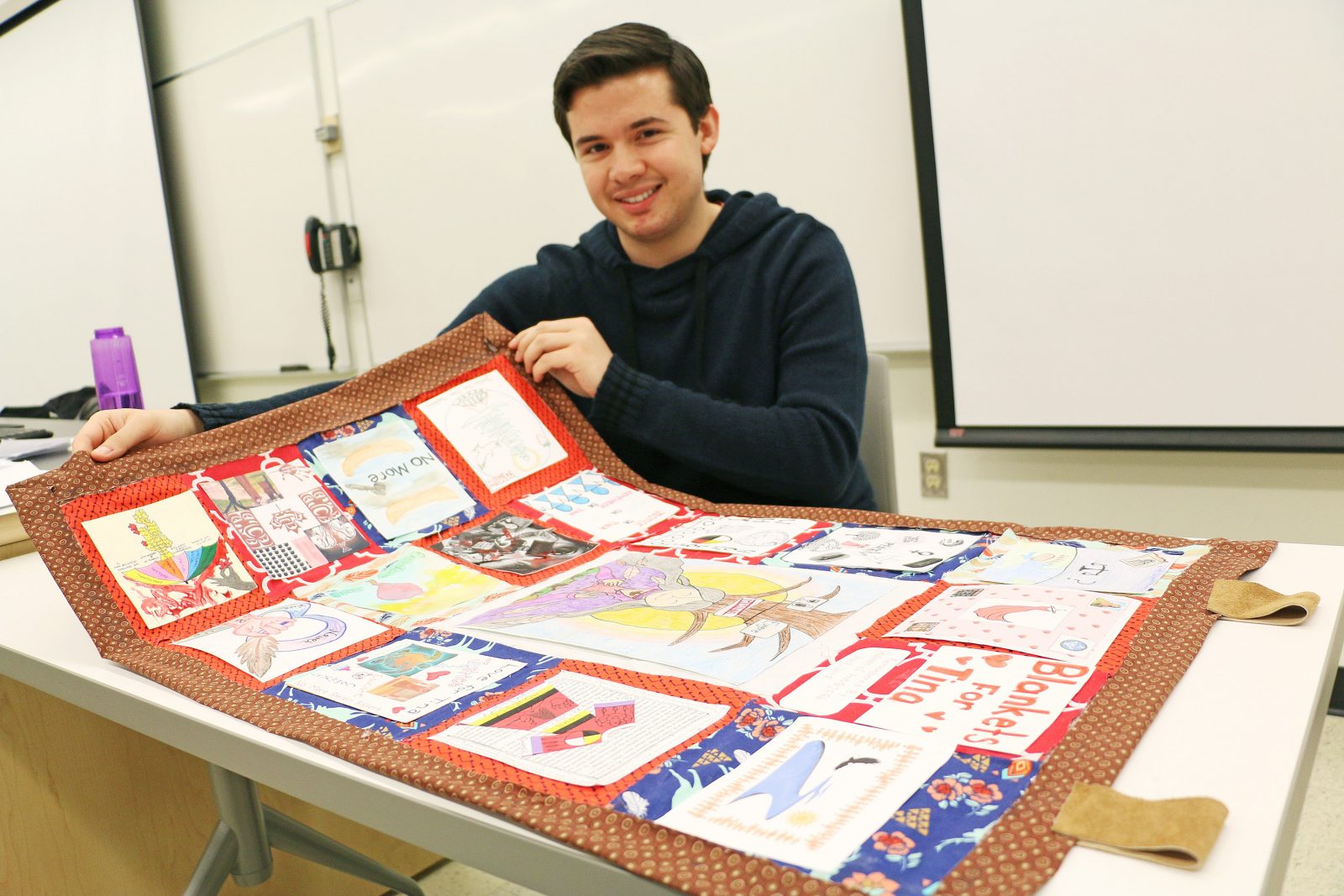 Third-year Public Health student Brendan Burke was one of 23 students who helped to create a blanket in honour of Tina Fontaine as part of Studies in Indigenous Culture I course.

Displayed at the front of Michelle Thomas’s classroom was a colourful quilt made up of carefully crafted squares, each with the same common goal — to honour the memory of Tina Fontaine.

Created by students in Brock’s Studies in Indigenous Culture I course, the blanket contains messages of hope and remembrance related to the slain 15-year-old girl, whose blanket-wrapped body was pulled from Winnipeg’s Red River in 2014. Fontaine’s murder renewed a call for a national inquiry into the high number of missing and murdered Indigenous women in Canada. 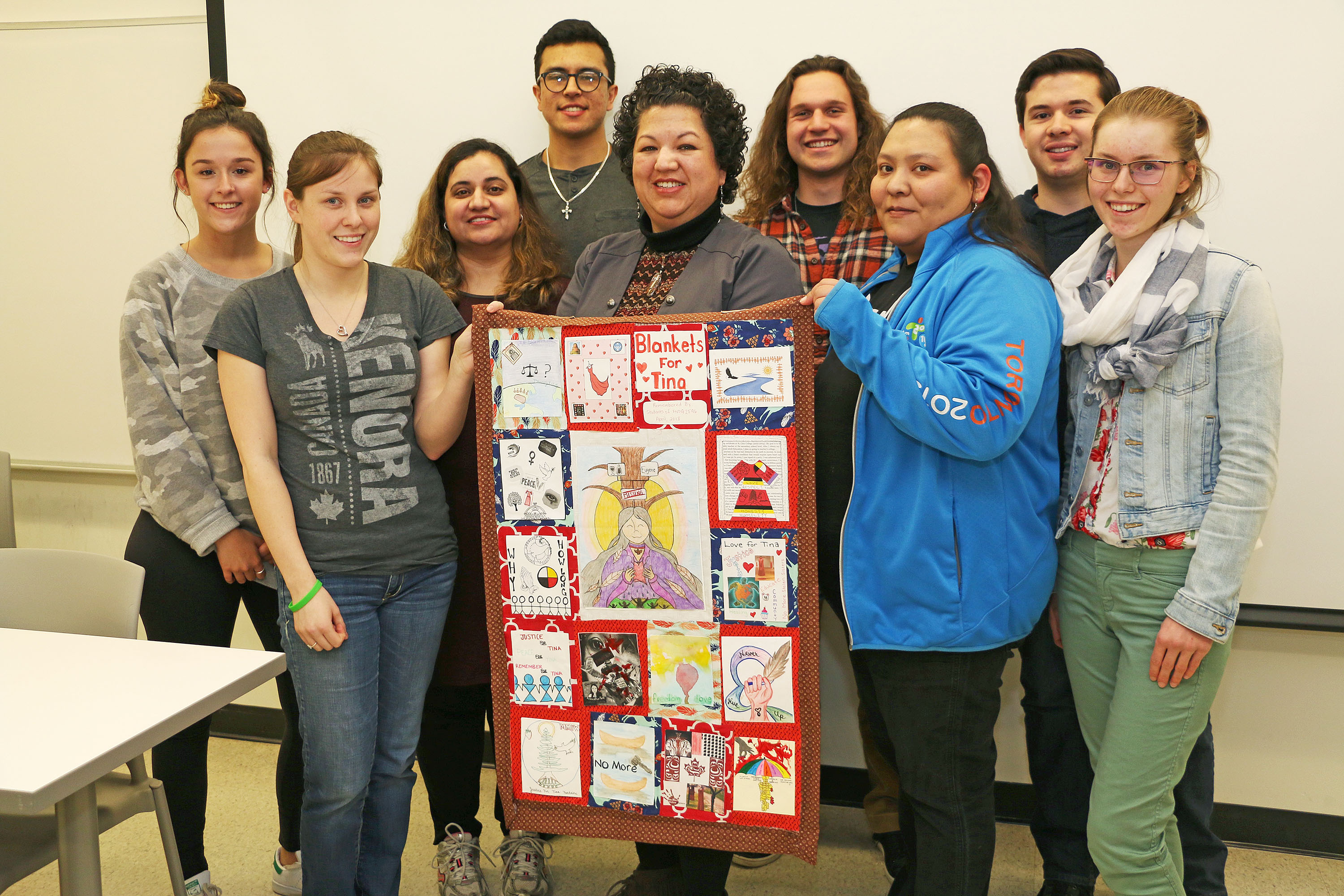 Students in a Studies in Indigenous Culture I course created a blanket as part of the Blankets for Tina movement in honour of slain teen Tina Fontaine.

As part of various rallies across the country, the Blankets for Tina movement was created, encouraging participants to wear a blanket in the teen’s honour to ensure she is not forgotten.

Fontaine’s powerful story and the justice sought after her death was among several difficult topics tackled by the Indigenous Culture class during the winter term.

It was while learning about Fontaine that Aboriginal Adult Education student Cassandra Green began to feel an innate connection to the teen. This prompted her to tell her own story — both as an Indigenous woman and a survivor of sexual violence. Green used the quilt space, as well as the accompanying write up required by each of the 23 participating students, as an opportunity to open up.

“I put myself out there on my square,” she said before describing her design, which also included symbols from her Bear Clan Mohawk and Ojibwe heritage.

Green was hopeful the project would help to raise awareness of missing and murdered Indigenous women and would encourage Canadians to become more informed about the history of Indigenous communities.

For Brendan Burke, a third-year Public Health student with a minor in Indigenous Studies, the project evoked a number of emotions.

“We all sat in a circle and spoke about what each piece of the blanket meant to us — how we were representing Tina, speaking for her and making sure she’s not forgotten,” he said. “It was very meaningful.”

Burke, who also self-identifies as Indigenous, filled his square with a Tree of Peace to represent the peaceful place Fontaine has now hopefully found herself, while also symbolizing change that is on the horizon for future generations of Indigenous people.

Thomas said she was inspired to introduce her class to the project after seeing the Blankets for Tina campaign pick up steam on social media.

“It was very moving,” she said, “and helped to give people a sense of responsibility of what they can do to create change, whether they are Indigenous or not.”

Thomas said her students put a lot of thought and effort into their contributions to the project, expressing how Fontaine’s story personally impacted them and what their hopes are for the future.

“I think it was really inspiring for them,” she said. “They understand that it’s important that we remember these stories. We can’t sweep it under the rug; those days are over.”

Upon its completion, the blanket was presented to the Tecumseh Centre for Aboriginal Research and Education, where it will eventually be put up on display.

Thomas hopes the blanket will inspire other Brock students to take an Indigenous Studies course to learn more about Canada’s history.

“We are always looking for allies,” she said. “We all need to come together, learn that common history and figure out how we’re going to move forward.”