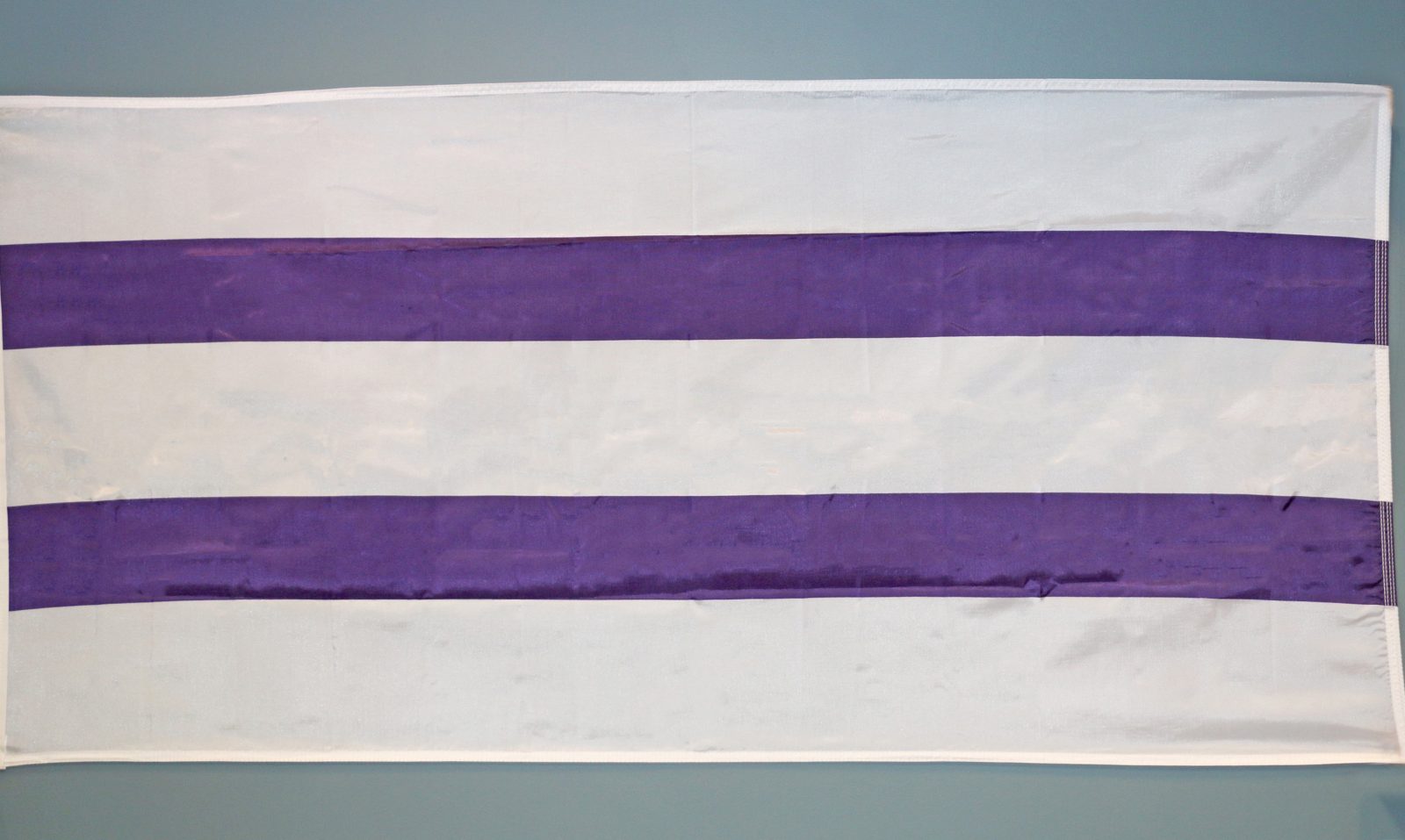 The Two Row Wampum flag will be the first featured on a fifth flagpole recently installed in the green space in front of Schmon Tower.

In a show of support and sign of respect for the many Indigenous communities represented on campus, Brock University is launching a new awareness initiative set to begin next week.

Keen observers will have noticed a new addition to the four existing flagpoles that stand in the green space in front of Schmon Tower. A fifth pole has been installed and starting Monday, April 9, will fly the flags of various Indigenous groups throughout the year.

The first flag, the Two Row Wampum, will be ceremoniously raised on Monday, April 9 at 2 p.m., following the Aboriginal Achievement Awards, which begin at 11 a.m. in Pond Inlet.

Flags will be changed once a month, with the goal of seeing a number of Indigenous communities represented over time.

“The introduction of the flagpole is another great way that Brock is showing its commitment to Indigenizing this institution through meaningful and sustainable changes,” said Sandra Wong, Brock’s Aboriginal Academic Support Program Co-ordinator. The project, launched through the University’s Aboriginal Education Council, complements the recent announcement that Brock intends to create a new Vice-Provost role to support Indigenous education.

Wong said the flagpole initiative will be used as both an awareness and educational tool, with efforts made to share with the Brock community the history of each flag as it takes its turn in the spotlight.

“Besides serving to educate and remind us about a valued and important part of our heritage,” he said, “this important action should help prompt all of us, across campus and across Canada, to truly and further embrace social inclusion and understanding across all communities and, through this flag raising, Indigenous communities in particular.”

“Brock is making inroads in leadership — we recently established the position of Vice-Provost, Indigenous Education and Community Engagement, we are completing a new University Strategic Plan and we are moving forward new academic and research programming. We aim to be a leading university and, including Monday’s flag raising, these are part of our steps forward.”

The Two Row Wampum was selected as the first featured flag because it symbolizes two vessels travelling down the same river together, each with distinct customs and ways. Though they travel together, they do not interfere with one another and no attempt is made by one vessel to try and steer the other.

“With Indigenization, we are the experts in our boat,” Wong said. “As we work on the relationship between the University and the Indigenous community, we need to make sure we are always involved in what’s happening.”

Wong said the ongoing flag initiative is a sign of respect from the University and will allow Indigenous students to see themselves represented on campus.

Colton Clause, Brock’s Aboriginal Events Co-ordinator, said the flags showcased throughout the year will also help to breakdown the incorrect notion that all Indigenous communities are the same.

“We’re not all a part of the same First Nations group and don’t come from the same geographic area. There are distinct differences between groups; We have unique cultures, traditions, values, languages and histories,” he said.

The launch of the flagpole initiative Monday will come at the end the of Aboriginal Achievement Awards ceremony. The awards are held annually to honour two outstanding students, one undergraduate and one graduate, who have shown not only scholarly achievement but also an interest in community and institutional involvement.