Windsor and Brouillette named Brock University athletes of the year 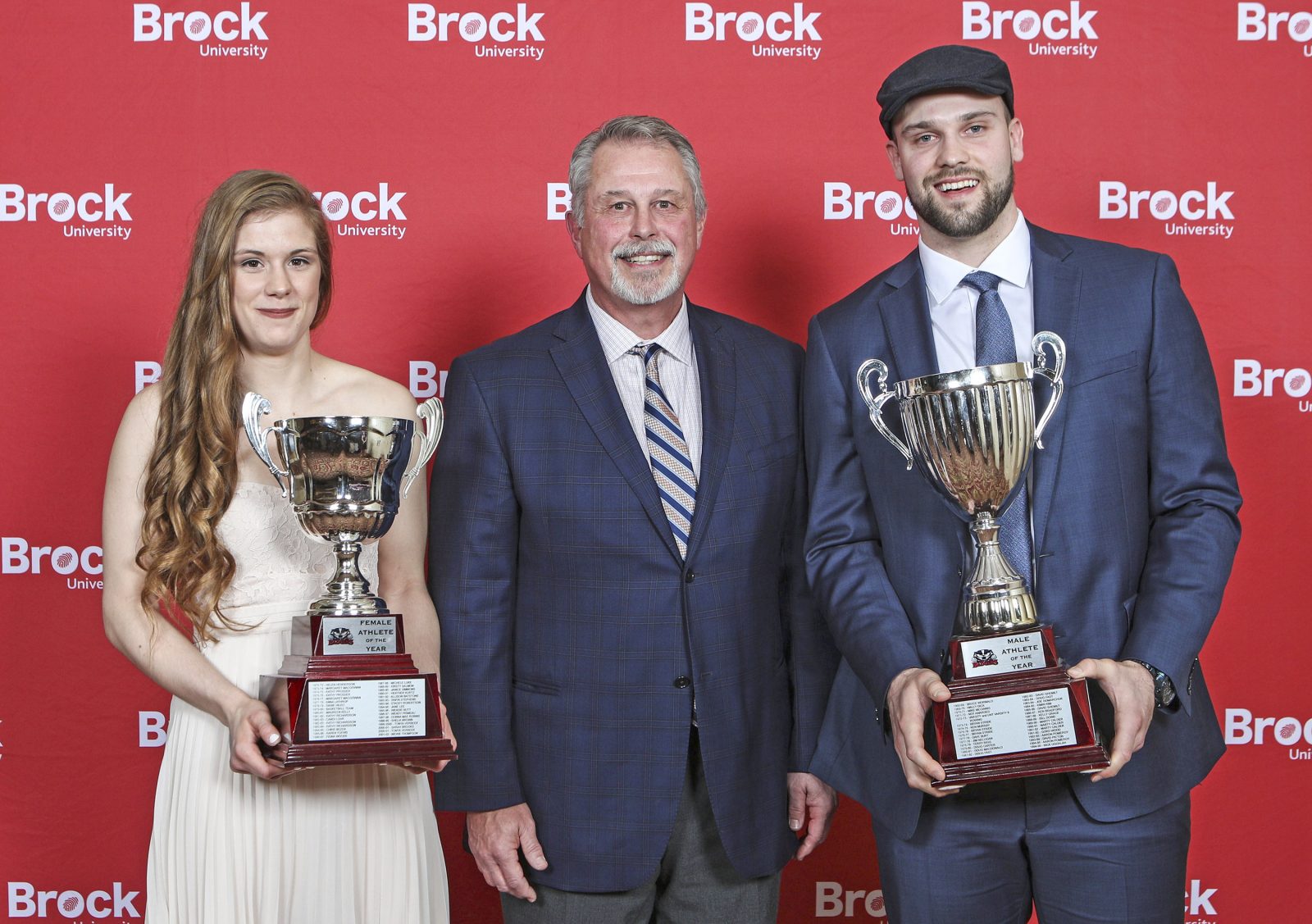 Brock Sports Director Neil Lumsden is pictured with 2017-18 Athletes of the Year Jessica Brouilette, from women’s wrestling, and Clint Windsor, from men’s hockey.

One of the most successful seasons in the history of Brock University athletics wrapped up Wednesday night with the annual Brock Sports awards banquet.

In front of a crowd of more than 800 Brock athletes, staff and supporters at the Holiday Inn and Suites Parkway Conference Centre Wednesday night, men’s hockey player Clint Windsor of Hamilton and women’s wrestler Jessica Brouillette of Barrie were named the 2017-18 Brock Athletes of the Year.

Clint Windsor had one of the best-ever performances by a Brock goaltender.

“What an end to an incredible year for our team,” said Windsor. “I am so proud of the guys and the way we competed throughout the year. We were labelled as underdogs, but we kept proving people wrong in the playoffs and it was a great way to cap of my career at Brock.”

“It is definitely an honour to be recognized,” he said. “There have been a lot of great athletes that have come through Brock and to be named Male Athlete of the Year is something I would have never dreamed of. It is an incredible token to take away from my time at Brock.”

In the postseason, Windsor led the Badgers to series wins over Laurier, Guelph and York while earning them an OUA silver medal and a berth into the National Championships for just the second time in school history. He posted a 6-3 playoff record while registering 342 saves in nine playoff games, including a career-high 51 saves in Game 3 over the York Lions in the OUA West Final.

Brouillette, meanwhile, had an exceptional final season for the Brock women’s wrestling program.

“It was really exciting and really special to win the team and individual title at Nationals in my last event as a Brock student-athlete,” said Brouillette, who was part of the wrestling team named women’s team of the year Wednesday. “To do it with this great team and coaching staff, who have been so supportive throughout the years was also very exciting. It was a perfect end to my varsity career.”

Brouillette said it was extra special being presented the award by three-time Olympian Tonya Verbeek.

“To have my teammates and coaches here as well as having Tonya presenting me the award was something special. I have worked with her so much and she is a huge inspiration to me,” she said.

The fifth-year captain led her team to their eighth USPORTS National Championship and 17th OUA Championship in the program’s history.

During the regular season, Brouillette placed first at the Brock Open, second at the Guelph Open and SFU International and third at the Commonwealth Games Trials. In March, she also represented Team Canada at the 2018 Women’s World Cup in Japan.

Correa received the R.M. Davis Surgite Award while Murphy took home the David Atkinson Surgite Award. Both these student-athletes have excelled in the classroom and on the court and ice throughout their university careers.

The Dallas Beaton is named after former Brock men’s hockey captain Dallas Beaton because of the dedication he showed towards academics, athletics and the community during his time as a Brock student-athlete.

The Spirit of Brock Award is named after David S. Howes, who was committed to Brock University and the community. It is presented to students who best embody the spirit of Sir Isaac Brock – leadership, courage, innovation, inspiration and community service.

The Brock Coach of the Year award was awarded to Brock men’s hockey head coach Marty Williamson. After talking over the program last August, Williamson led his team an OUA silver medal, highlighted by their trip to the National Championships. He was named OUA West Coach of the Year and finished with 20 wins in his first season at the helm.

The Brock Sports Performance Awards went to Sara Scott who received the BSP Student Intern Of the Year and Taylor Tiessen who took home the BSP Impact Award.

The 2017-18 Brock Women’s Team of the Year was the Brock women’s wrestling team which captured their eighth USPORTS National title and 17th OUA title in school history.

The 2017-18 Brock Men’s Team of the Year was the Brock men’s wrestling team which captured their 18th USPORTS National title and 20th OUA title in school history.

The Brock men dominated both the OUA and USPORTS Championships. They had had a school-record eight USPORTS All-Canadians and 10 OUA All-Stars.