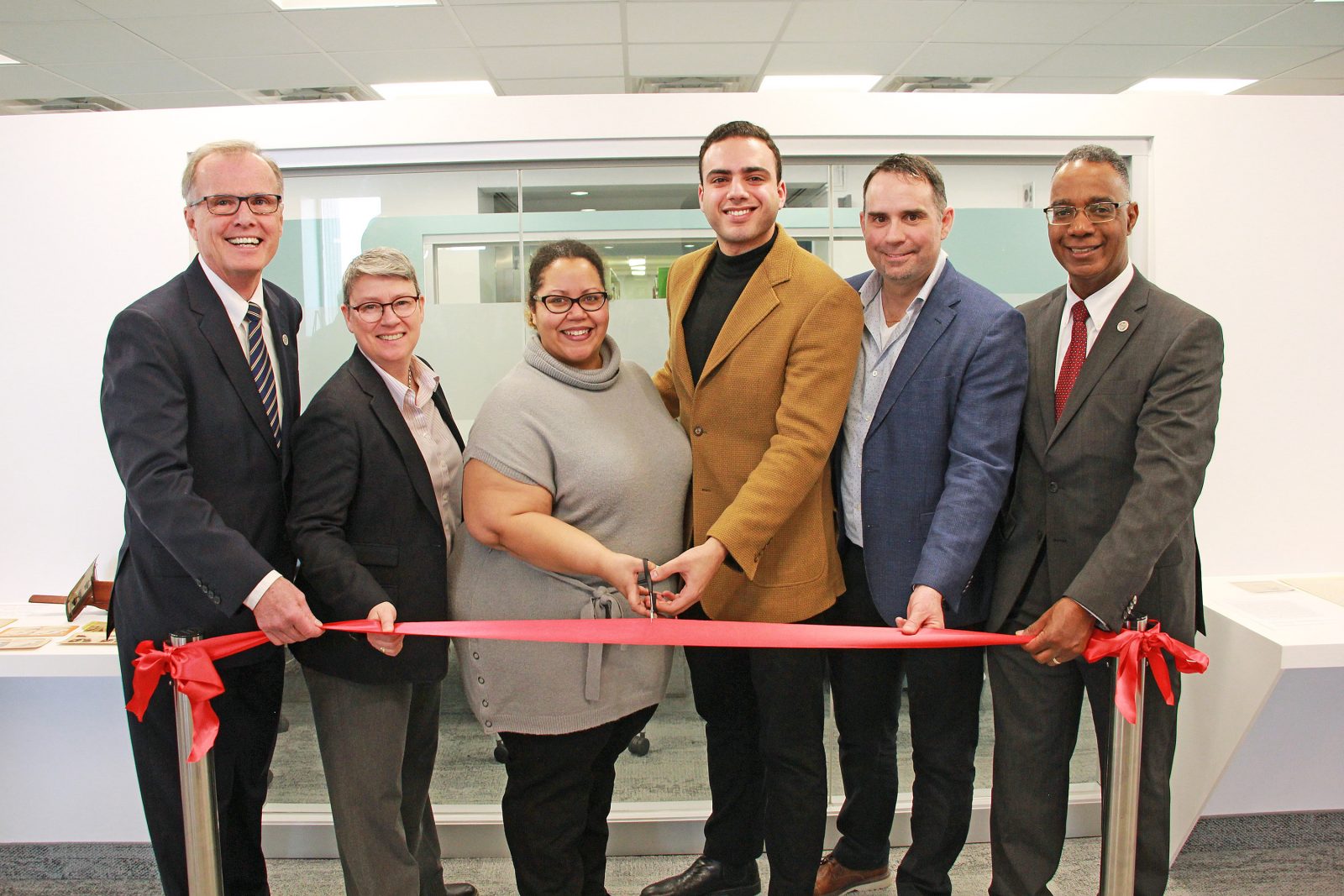 Lying back with a book in hand, Ben Skippen felt at home.

Nestled in a giant bean bag chair and immersed in Crime and Punishment, the second-year Media Communications student was lost in literature while enjoying his new study spot on the fifth floor of Brock University’s James A. Gibson Library.

Behind him, also making use of the new Children’s Educational Foundation of Canada (CEFC) Commons, students filled rows of tables where they worked to share ideas for various group projects. 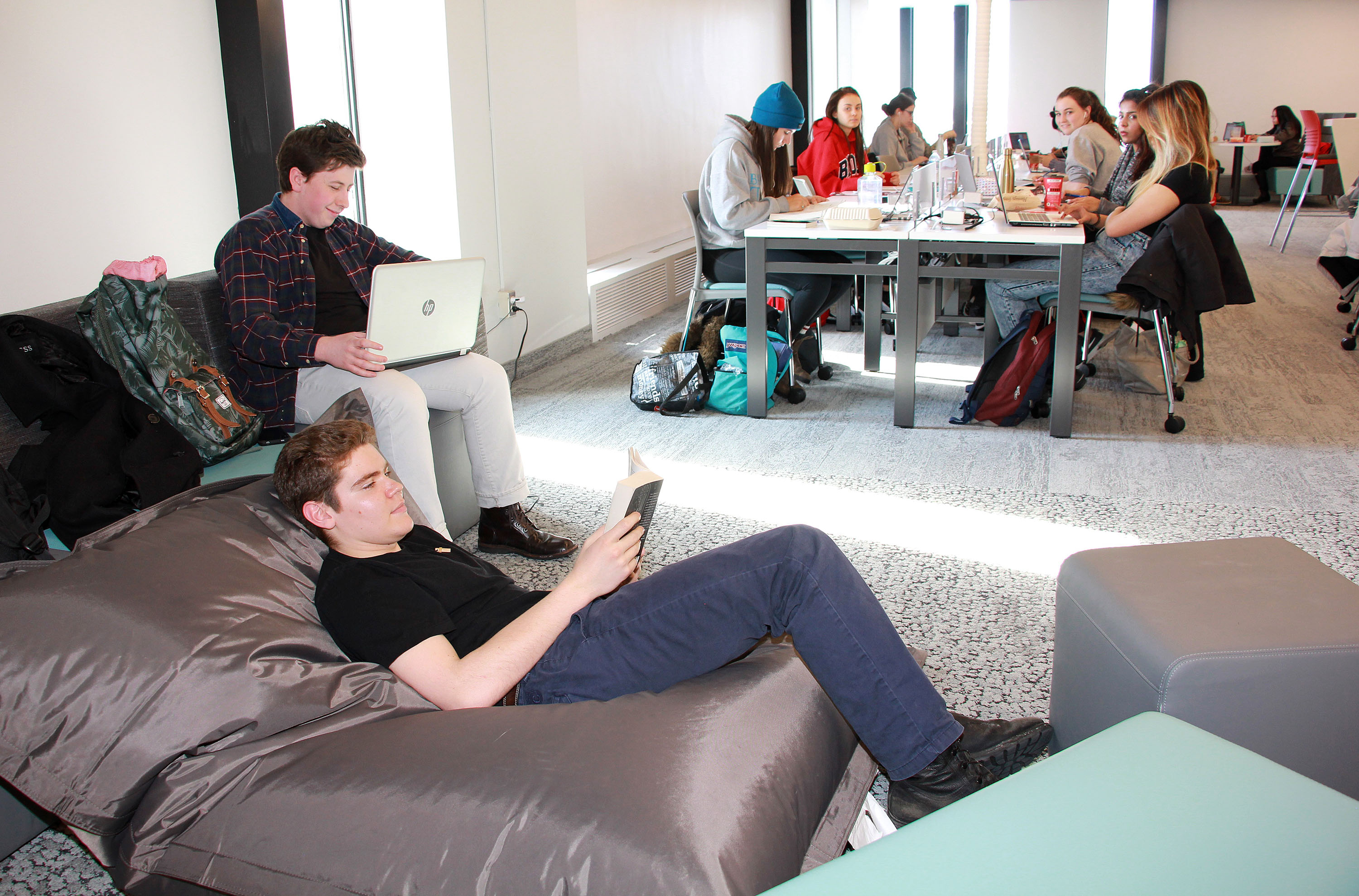 Designed to inspire creative and collaborative activity, the 3,600 square feet of innovative library space made its quiet debut last week, but was officially opened to the Brock community with a ribbon-cutting ceremony Tuesday, March 6.

The $460,000 project aimed to create a fresh and modern environment that accommodates a variety of learning styles and encourages both individual and group study with 130 new study spaces and three new group study rooms.

The renovation was made possible by a generous donation from the CEFC. The $263,000 gift supported the fifth floor project, while also contributing to Brock’s Archives and Special Collections endowment and the purchase of library resources.

University Librarian Mark Robertson said the new CEFC Commons has quickly become one of the most popular spaces for students on campus.

“One of the most rewarding aspects of a project like this is seeing how students discover, embrace and interpret the space — and embrace it they have,” Robertson said.

Feedback over the past week has been overwhelmingly positive, he said, with many students expressing the desire to see similar renovations on other library floors.

The fifth floor project complements the opening of the Matheson Learning Commons in 2008 as well as renovations to the library’s sixth floor completed in 2015. 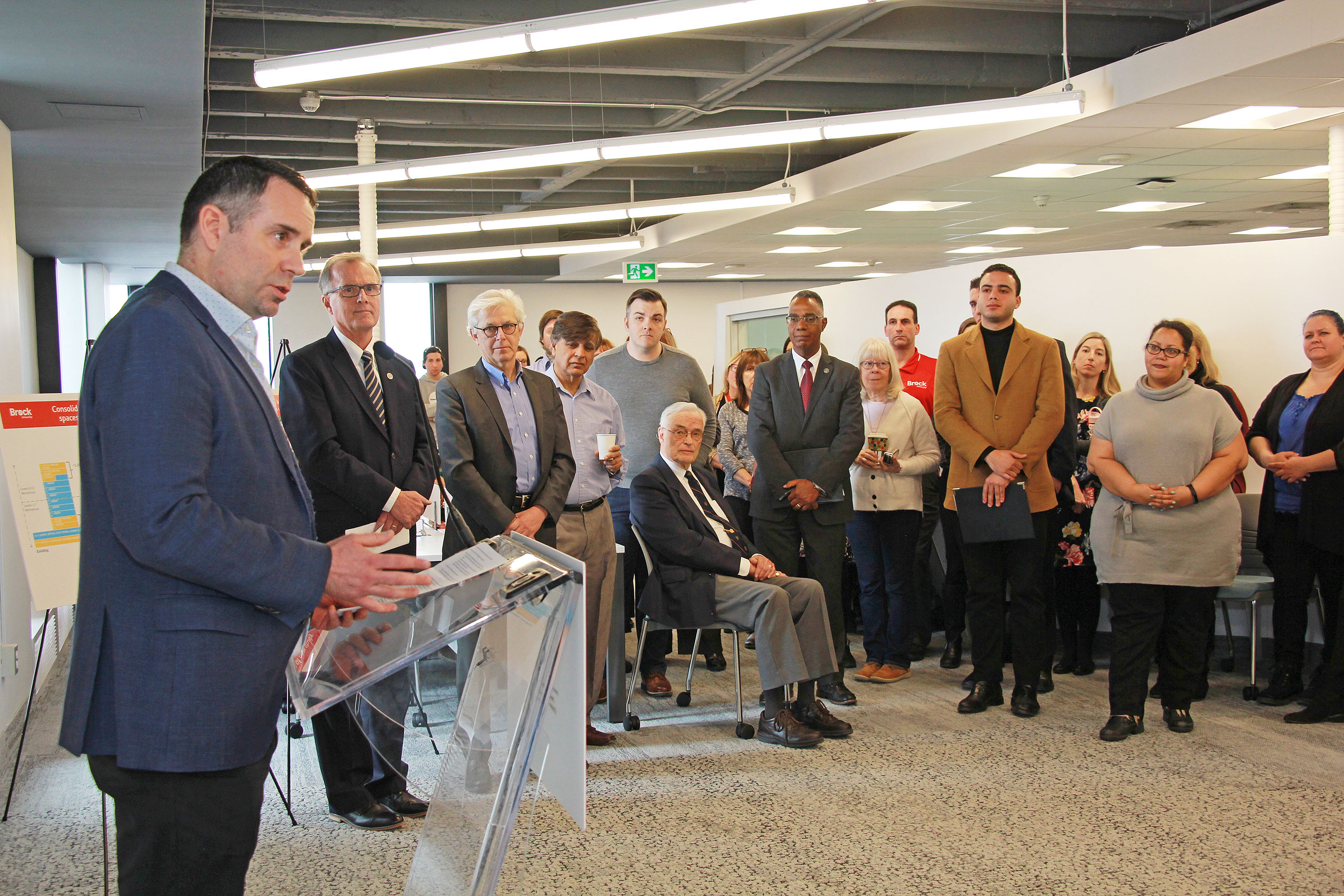 University Librarian Mark Robertson speaks about the future of the James A. Gibson Library during the opening of the Children’s Educational Foundation of Canada Commons on Tuesday, March 6.

Brock University President Gervan Fearon said the CEFC Commons is part of the library’s ongoing evolution, which strives to provide students the space they need to not only study but also do creative work.

“Without donors, we aren’t always able to make projects like this happen,” he said. “It’s important for us to recognize the contributions of the Children’s Educational Foundation of Canada.”

The CEFC Commons provides a “taste of what is possible” for Brock’s library in the future, Robertson said. “The enthusiastic embrace of this space by our students shows the need and the powerful impact modern learning spaces can have on our campus.”

Brock Graduate Students’ Association President Shannon Kitchings said libraries should be “playgrounds for everybody,” and that’s what this new space has helped to accomplish.

“They should be accessible. They should be inspiring. They should offer a space to encourage all the thoughts possible — the brilliant ones and the impossible ones,” she said. “It should be a place to make mistakes, to make discoveries, to make all kinds of intelligent magic and I really think this new renovation is the perfect place to do that. It is beautiful, light, inspiring, transparent and it is ours and that is amazing.”

Brock University Students’ Union President Faisal Hejazi said the CEFC Commons has “already had a tremendous impact on the student body,” which has previously requested more study space on campus.

“Several peers have approached me with positive feedback. They feel their voices are being heard and their needs are being addressed.” 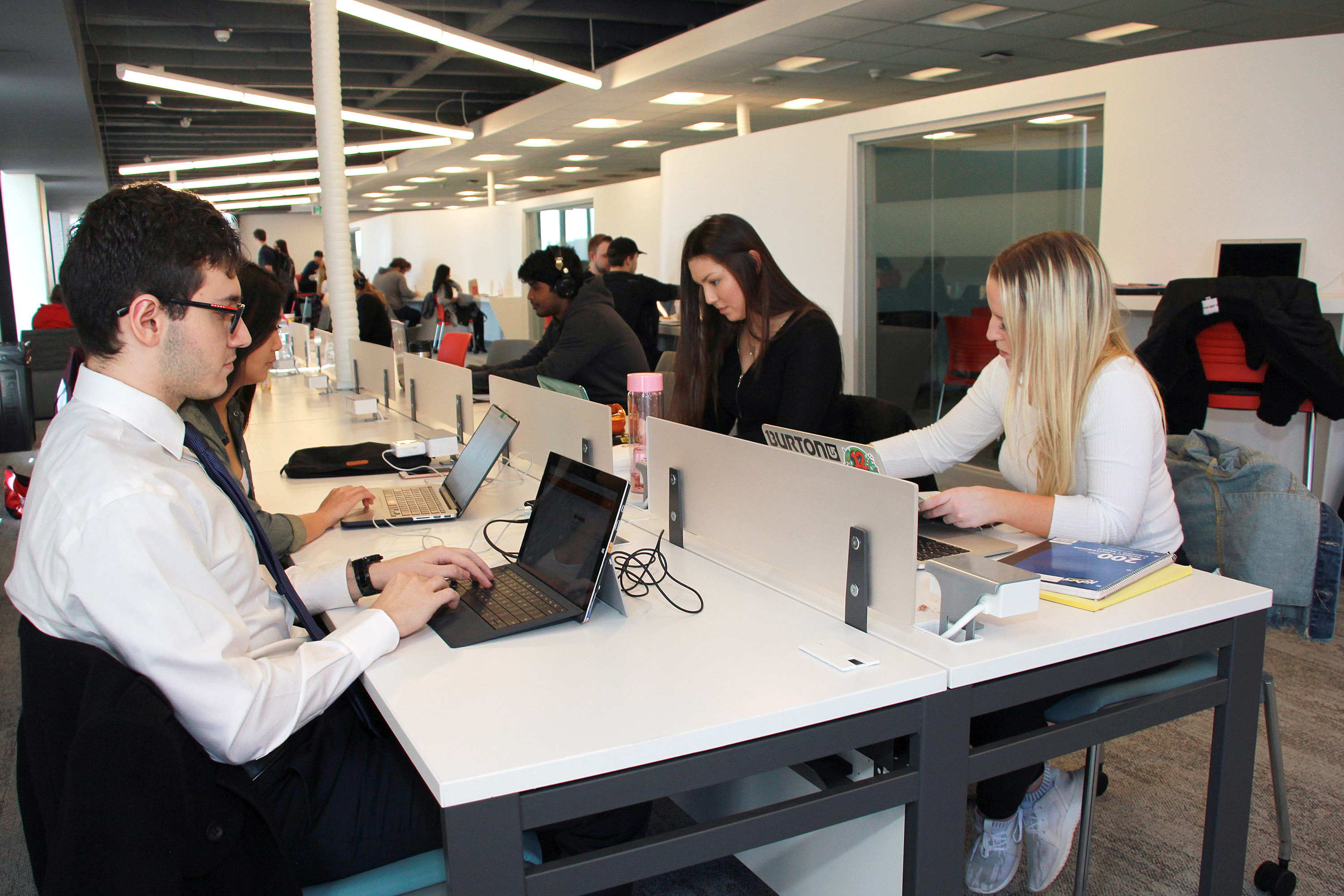 The new Children’s Educational Foundation of Canada Commons on the fifth floor of the James A. Gibson Library has quickly become a popular study spot for students on campus. 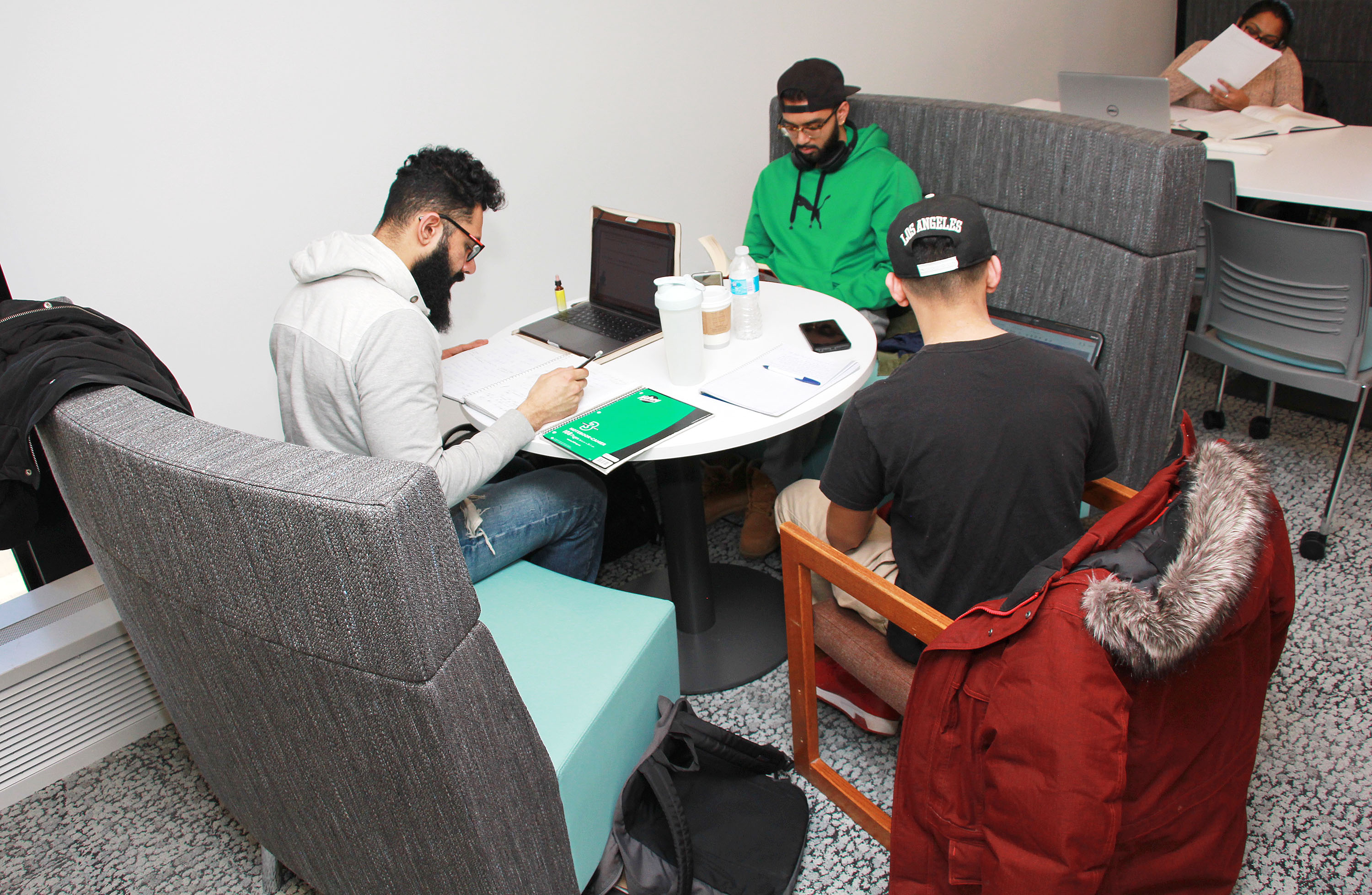