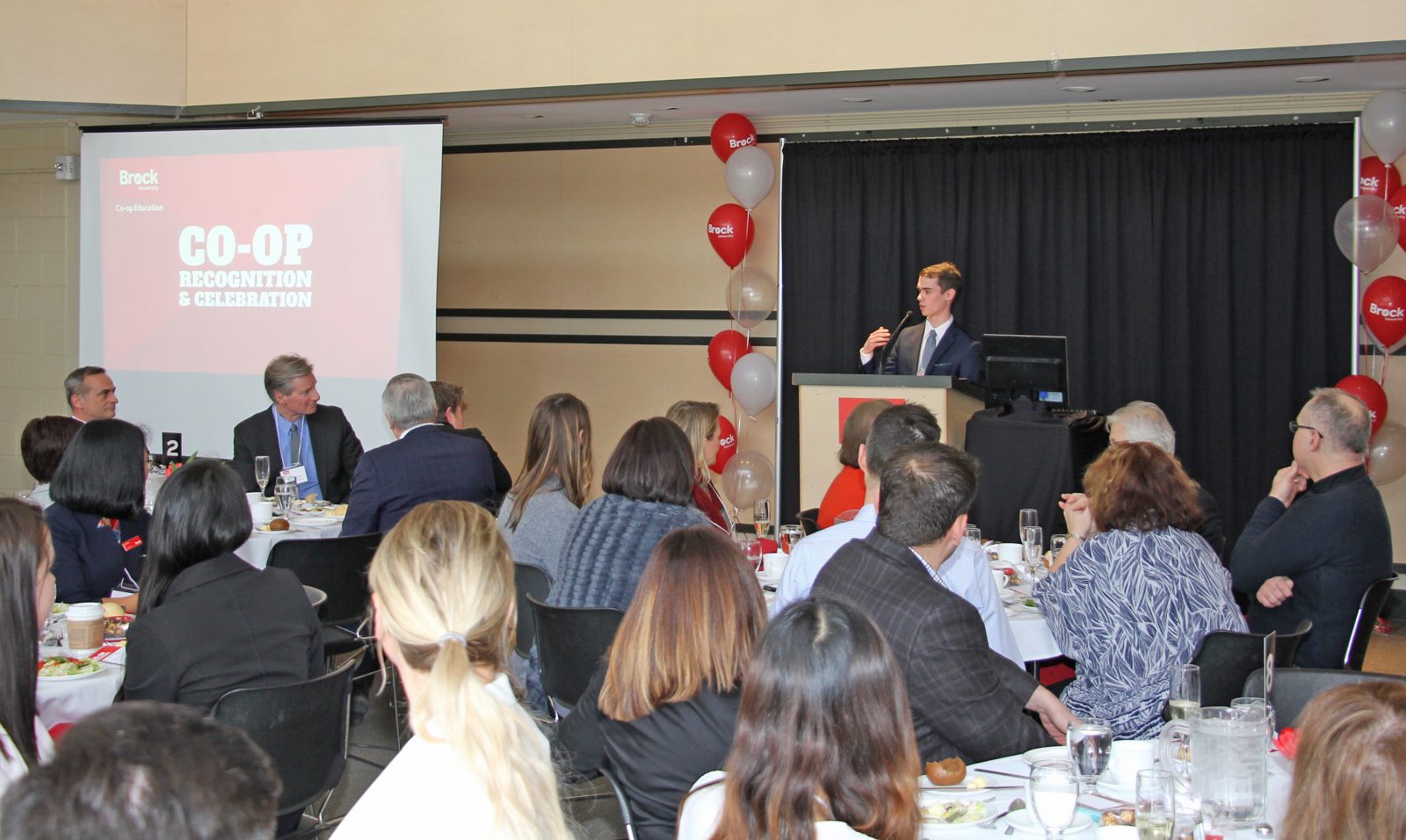 Undergraduate Co-op Student of the Year Jake Berec thanks his work term supervisors and the Brock Co-op Education team during the Co-op Recognition and Celebration Luncheon Thursday at Pond Inlet.

Lunch was served with a side of co-op success at a recent celebration in Pond Inlet.

The packed event paid tribute to the commitment of numerous outstanding co-op supervisors, as well as the accomplishments of Co-op Students of the Term, Meghan Birbeck and Jake Berec, and Alumni Co-op Award-winner, Fred Barzyk.

For Julia Zhu, Brock’s Associate Director of Co-op Education, the importance of celebrating the many outstanding employers that the department works with could not be overstated.

“We are very grateful to have so many employers here with us today,” she said. “Without their commitment to our program, our students would not be able to experience the life-changing opportunities that co-op work terms can bring.”

Having been invited to receive recognition themselves, several employers highlighted the excellence of the co-op staff and students they work alongside.

“The service really stands out and the responsiveness of Brock’s co-op staff is stellar,” said Kavitha Vincent, senior employment specialist at FedEx Express Canada. “Brock students bring a humble attitude and are hard working because of it.”

Lindsay Dierick, workforce information analyst at the Ontario Ministry of Transportation, had similar praise for the important roles co-op students play within her organization.

“They let us see a new perspective and always bring innovative ideas,” she said. “They help us to complete projects we may not have otherwise had time to do.”

With outstanding co-op supervisors for the Fall and Spring/Summer work terms (listed below) receiving recognition based on student nominations, Vincent felt the honour reflected positively on the entire organization.

“We are very proud and it means we are distinguished,” she said.

The Co-op Recognition and Celebration Luncheon was part of Brock’s National Co-op and WIL Week from March 19 to 23, which also included mock interviews, social media contests and business card draws.