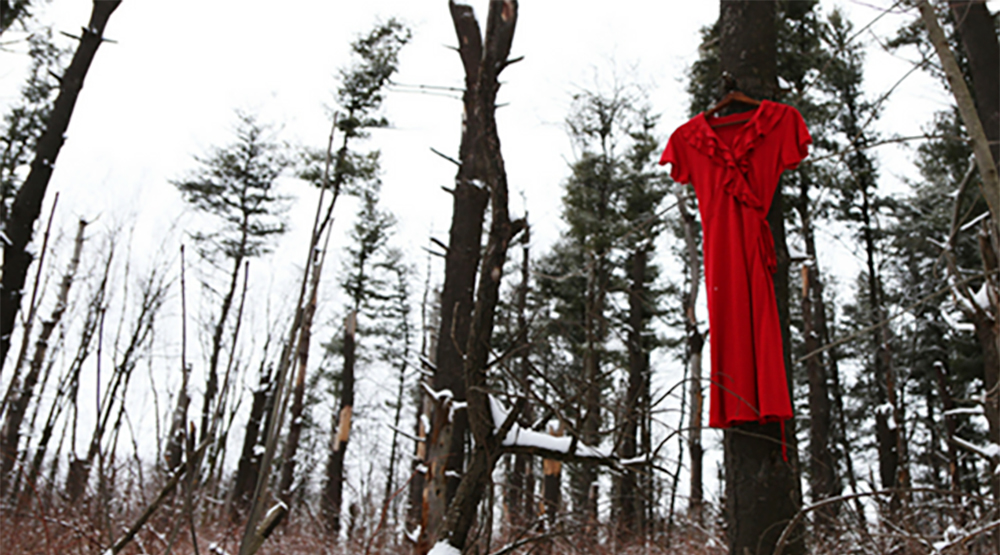 The REDress Project is one of a number of events being held at Brock Thursday, March 8 for International Women's Day. Photo: Krista McMillan

Drawing attention to missing and murdered Indigenous women and girls, along with highlighting the culture-shifting #MeToo movement, will be the focus of this year’s International Women’s Day events at Brock University on Thursday, March 8.

Starting at 1 p.m. in TH 244, a panel of faculty and student experts from the Department of Communication, Popular Culture and Film will present “Pressing for Progress: Women, Hollywood, and #MeToo.”

Faculty members Christie Milliken, Cristina Santos, Liz Clarke and fourth-year student Yasmin Evering-Kerr will touch on the ways #MeToo and #TimesUp have affected both Hollywood and the field of film studies in recent months. A moderated discussion will be followed by a question-and-answer period.

Later in the afternoon, the Centre for Women’s and Gender Studies presents a series of events to draw attention to missing and murdered Indigenous women and girls.

At 3 p.m., a Round Dance supported by Indigenous women drummers will be held in Market Hall. This will be followed at 4 p.m. by a panel discussion featuring Robyn Bourgeois, an Indigenous scholar and assistant professor in the Centre for Women’s and Gender Studies, in AS 215.

“The REDress Project and poster display will provide a powerful memorial to Indigenous women who have gone missing or been murdered,” said Margot Francis, Associate Professor in the Centre for Women’s and Gender Studies and co-organizer of the day’s events.

Francis said Indigenous women are nearly three times more likely to be killed by a stranger than non-Indigenous women, and nearly half of their cases remain unsolved.

“The most recent of these unsolved cases, that of 15-year-old Tina Fontaine of the Sagkeeng First Nation in Manitoba, who was murdered in 2014, exemplifies the failures of the justice system to address this violence.”

Jane Theriault-Norman, a student of Mi’kmaw and settler heritage and a second-year Kinesiology major who also helped organize the day’s events, said she was excited and nervous to see the red dresses hanging around the Brock campus.

“While the installation will be powerful and beautiful, I know it will also be emotional to be confronted with such a strong visual reminder of the violence Indigenous women, girls and gender minorities endure.”

All events are open to the public, and everyone is welcome.