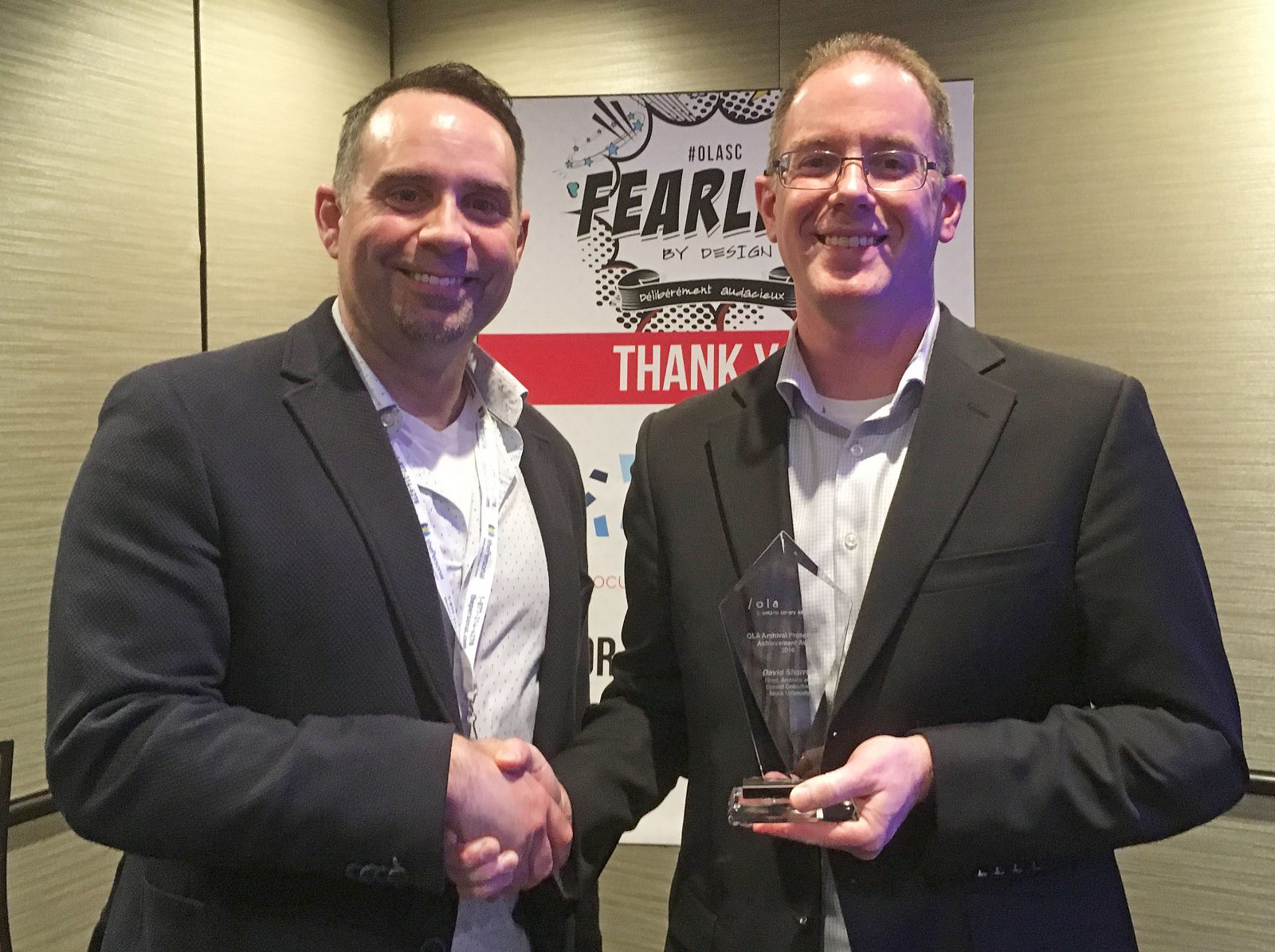 There are few moments when David Sharron’s mind isn’t on Brock University’s Library.

The Head of Archives and Special Collections is always thinking about ways to highlight the valuable resources available at the University, and when he learned he was receiving a prestigious provincial award, that pattern did not change.

Sharron was honoured Thursday, Feb. 1 with the Ontario Library Association’s Archival and Preservation Achievement Award. Presented during an OLA conference in Toronto, the award recognizes individuals and institutions who have made significant achievements in the field of preservation or conservation for library and archival materials.

Humbled by the recognition, Sharron said the best part about the honour is drawing attention to the work being done in Brock’s Archives and Special Collections.

“We have always been well supported by the University Librarian and Brock, which has allowed us to do fantastic things in the Archives,” he said. “If this award encourages someone to donate an archival collection to Brock or leads a student to come explore the resources that we have here, then I would be thrilled to no end.”

Sharron’s passion for the work being done on Schmon Tower’s 10th floor has only grown since he first took on his role 11 years ago.

“I absolutely love my job,” he said. “It is the diverse nature of working in the Archives that makes it so much fun. One day I can be talking to an interesting donor about a new collection and the next I could be helping a researcher from Australia, working on an exhibit, teaching a class, doing some preservation work or learning more about Niagara’s history. No two days are the same.”

Sharron said his colleagues share a similar passion, which helps the Archives environment to thrive.

“We do our best to be available to everyone and make sure our work is to the highest standards of the archives profession,” he said.

University Librarian Mark Robertson was proud to present Sharron with the prestigious award earlier this month.

“David is a remarkable archivist with many significant achievements,” he said, speaking to both Sharron’s professional experience at Brock, as well as his past roles working with Bruce County and NASA, among others. “I have had the pleasure of working alongside David and have enormous admiration for his professionalism, his expertise and the impact he has made at Brock and beyond.”

Robertson described the pivotal role Sharron has played in the transformation of the University’s archives, shifting from a traditional special collection to a unit more focused on unique archival collections. One of the milestones in this journey was Brock’s achievement of ‘Category A’ archival designation under Sharron’s leadership in 2008, which allowed the archives to expand its role in acquiring nationally historic collections.

“David is not content to stand still, but is eager to push forward into new terrain for the archival profession,” Robertson said. Last year, Sharron became one of only three people in Canada and 325 globally to receive the Digital Archives Specialist certification through the Society of American Archivists.

Sharron has also been proactive in mentoring the next generation of young minds who have expressed an interest in archival methods. Several of the Brock students he has taken under his wing have gone on to archival or heritage careers.