When Niagara Falls Comic Con returns for its seventh anniversary this June, it will have a new title sponsor: Brock University.

Comic Con is a celebrity-studded convention that attracts tens of thousands of gaming and entertainment enthusiasts from across North America to Niagara Falls.

“We’re extremely excited to have Brock University on board for Niagara Falls Comic Con,” said Chris Dabrowski, Show Manager. “Both of our brands cater to similar audiences, so we think it’s a natural partnership.”

Niagara Falls Comic Con presented by Brock University takes place over three days from June 1 to 3 at the Scotiabank Convention Centre in Niagara Falls, Canada, and Dabrowski said it will be the biggest edition of the event ever held.

More than 30 celebrities, multiple movie car and prop exhibits, comic artists and seminars have already been confirmed with more announcements to take place in the coming weeks.

“Comic Con has soared in terms of visibility and attendance over the past few years,” said Kevin Cavanagh, Interim Executive Director of Marketing and Communications at Brock.

Brock’s sponsorship of Comic Con will include opportunities for student involvement at the event and on-campus cross-promotion. 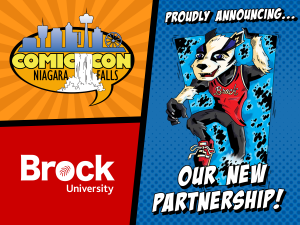 Brock University has been named title sponsor of the 2018 Niagara Falls Comic Con show June 1 to 3.

“Last year it drew nearly 20,000 people from Ontario alone, people who are very engaged in entertainment and gaming. There are a lot of future university students in that crowd, and we plan to tell them about Brock’s rich opportunities in programs like Digital Humanities, Popular Culture studies and our GAME program,” said Cavanagh.

“This year’s event also features a Legends of Wresting Reunion which will see superstars like Ric Flair, Brutus Beefcake, Greg Valentine, the Honky Tonk Man, Trish Stratus and Lita join other guests in celebrity row,” added Dabrowski.  “Our guest artist line up is one of our best ever, headlined by legendary artists Jim Steranko and Neal Adams.”

In all, Niagara Falls Comic Con will feature more than 200,000 square feet of comics, artists, pop culture and geek-related memorabilia, cosplay contests, as well as an 1980s Video Game Zone, Falls Horror Fest, TV/Movie cars including a Mystery Machine and ’89 Batmobile. Other exhibitors include the world’s largest collection of screen-used props and memorabilia from the John Carpenter classic The Thing, as well as a Hollywood museum of screen-used props and wax replicas.

Niagara Falls Comic Con 2018 takes place June 1 to 3 at Scotiabank Convention Centre. Tickets start at $25 and are available online at www.nfcomiccon.com or at the door on the days of the Show.