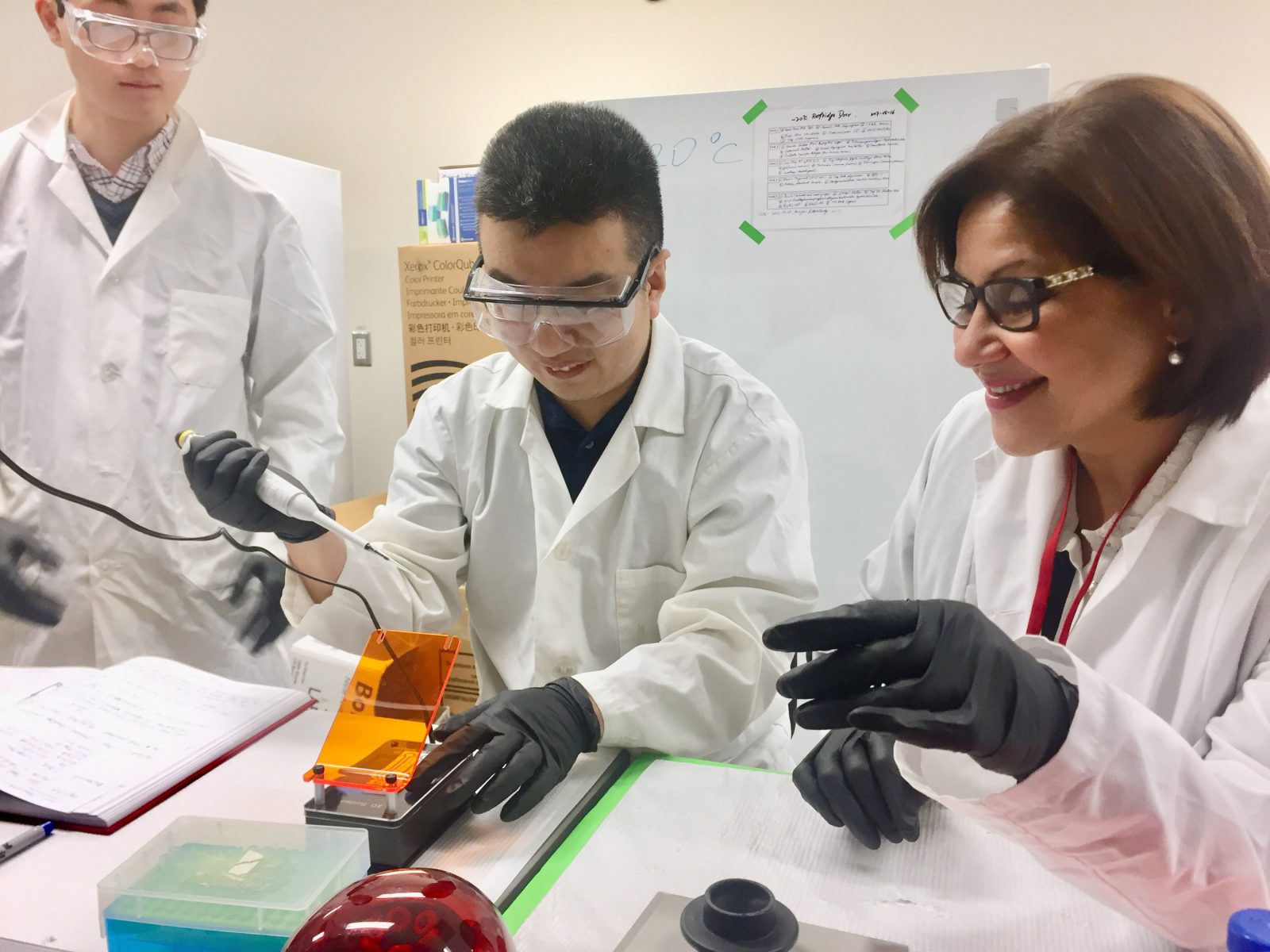 A chemist and a parasite expert at Brock University have teamed up to produce and test out a simple device that can detect diseases from DNA samples. It’s a scaled-down version of what is normally an expensive and complicated DNA laboratory technique, yet it’s fast, inexpensive and accurate, making it ideal for use in developing countries.

Brock University Assistant Professor of Chemistry Feng Li’s device consists of a strip of paper attached onto a glass slide. The paper contains several rows of what look like thermometers, lines with markings projecting out of bulb-like circles.

DNA samples are loaded onto the circles and move up the lines, much like mercury rises in a thermometer.

“Different concentrations of the genetic disease biomarkers in the samples would migrate different distances,” says Li. “So, all you need to do is read the distance they penetrate, just like you’d read a ruler.”

Known as the quantitative paper-based DNA reader, each device costs only about 10 cents. They work with a scaled-down version of a traditionally expensive and complex DNA laboratory technique.

While testing for the presence of disease markers, health-care workers use a technique called polymerase chain reaction (PCR), which makes millions of copies of a particular section of DNA.

“This is going to be extremely useful in resource-limited settings where you don’t have a lot of facilities to interpret the results,” says Li.

One such setting is the National Autonomous University of Honduras, where Brock University Professor of Health Sciences Ana Sanchez runs an internationally-renowned research program focusing on parasites.

She and her research team collected worms that had been expelled by children suspected of having soil-transmitted helminth infection, a disease affecting about 1.5 billion people worldwide and a major cause of childhood malnutrition and physical impairment.

The researchers used the quantitative paper-based DNA reader to test the worms for helminth infection.

“The results are beautiful; there’s no doubt that the system works,” says Sanchez.

She applauds the speed and sensitivity of the device, saying that diagnostic techniques in developing countries are traditional, basic and rely on the expertise of the person observing the sample.

Sanchez says the device goes beyond just a yes or no result by measuring the amount of genetic disease biomarkers in the DNA sample.

“How many parasites is this child harbouring?” she says. “That tells you maybe their immune response and nutrition are impaired, that we’d need to consider if treatment needs to be ramped up, even if there could be a possibility of parasitic resistance.

“The knowledge of parasitic burden of individuals and community will directly lead to public health interventions. What Feng has proven is that his invention works. We’re ready to bring it to the field.”

Both Sanchez and Li say they are happy with their research partnership, which evolved from casual conversations as they worked next to one another in their labs in Brock’s Cairns Family Health and Bioscience Research Complex.

“I think it’s a really nice thing that we talked and realized we could collaborate. There’s a lot of mutual interest between us,” says Li. “It’s a very fruitful collaboration. We match perfectly in the research field.”

Li says he is working with Brock’s business incubation facility BioLinc to create a plastic container that will house the paper-based DNA reader.