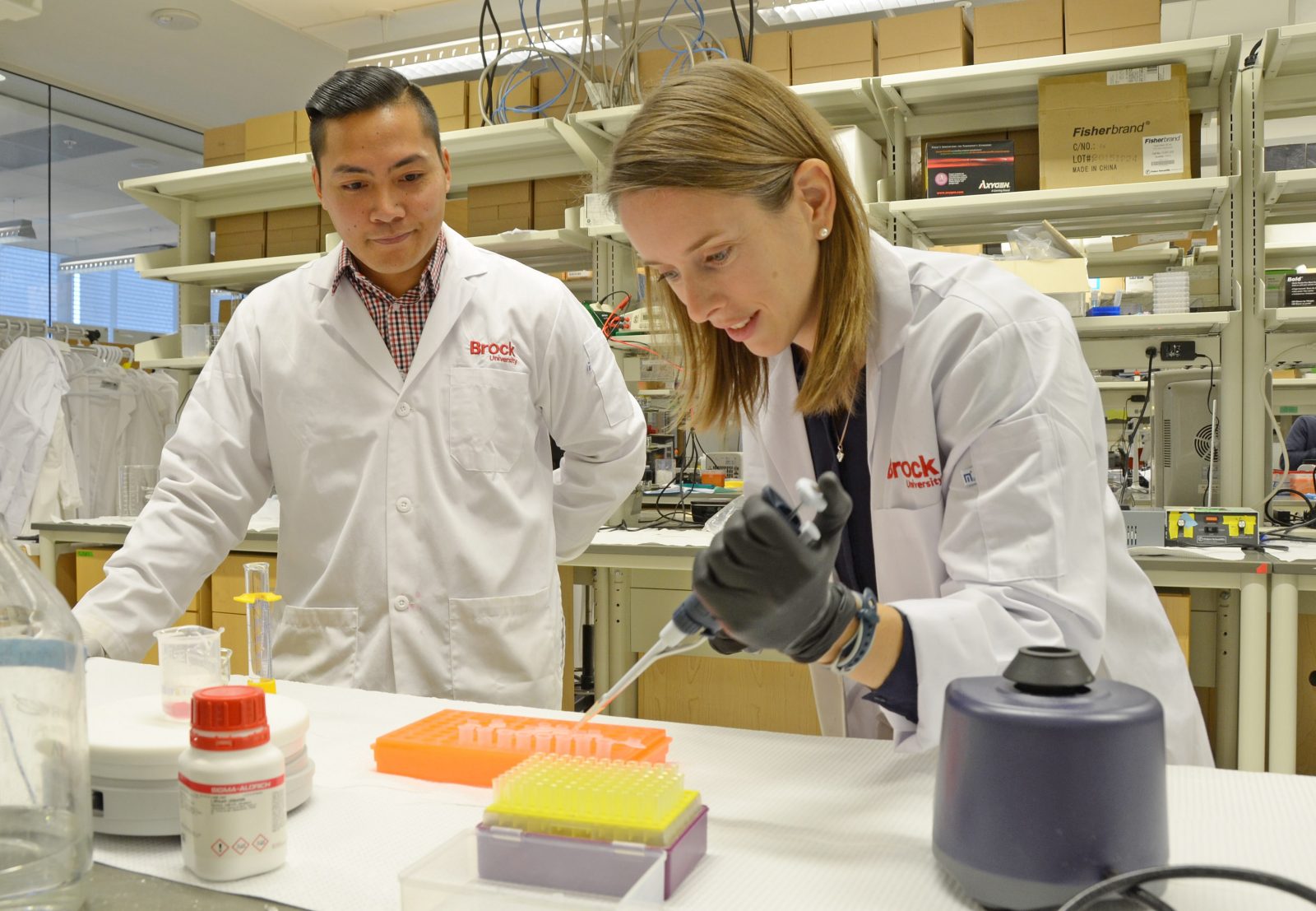 Postdoctoral fellow Val Fajardo, left, and Rebecca MacPherson, Assistant Professor in the Department of Health Sciences, are researching the impact of lithium in drinking water on Alzheimer’s disease.

Rates of diabetes and obesity, which are important risk factors for Alzheimer’s disease, also decrease if there is a particular amount of lithium in the water, says the study, published recently in the Journal of Alzheimer’s Disease.

Lithium is a water-soluble alkali metal found in igneous rocks and mineral springs. It is commonly used to treat bipolar and other mood disorders, but at much higher doses than what occurs naturally in drinking water.

The research team, which included Associate Professor of Health Sciences Paul LeBlanc, compared lithium levels naturally found in tap water with Alzheimer’s disease mortality rates, along with the incidence of obesity and diabetes, in the Texas counties.

The frequency of obesity and Type 2 diabetes also went down when the drinking water contained similar lithium levels, the researchers found.

Fajardo says he and his team focused on Texas because data on lithium levels were “freely available.”

“However, we are one of the first groups to show that lithium’s potential protective effect against Alzheimer’s disease, obesity and diabetes may translate to the population setting through very low levels of lithium in tap water,” says Fajardo.

The Brock research comes on the heels of an August study from the University of Copenhagen linking high lithium levels in drinking water to decreases in dementia rates.

But Fajardo warns it’s too early to start advising authorities to add lithium to drinking water.

“There’s so much more research we have to do before policy makers look at the evidence and say, Ok, let’s start supplementing tap water with lithium just like we do in some municipalities with fluoride to prevent tooth decay,” he says.

Fajardo, who came to Brock from the University of Waterloo, specializes in how a protein called GSK-3 affects skeletal muscles. GSK-3 is involved in dozens of signaling pathways that control cell growth, migration, glucose regulation and cell death.

But GSK-3 has also been implicated in a number of diseases including Alzheimer’s disease, diabetes and cancer.

As he studied the protein, Fajardo learned that lithium inhibits the function of GSK-3.

“Studies have shown that trace levels of lithium can improve mental health and reduce rates of suicide, homicide and violent crimes,” says Fajardo.

“Based on what I knew about GSK-3 in skeletal muscle and its potential impact on whole-body metabolism, I was thinking that maybe trace levels of lithium in tap water could also potentially reduce the prevalence of obesity and diabetes.”

MacPherson says that, in the brain, GSK-3 is associated with another protein called tau. Tau damages brain cells essential for learning and memory and causes the brain to develop structures called tangles.

GSK-3 is also involved in the formation of another structure in the brain called plaques. Tangles and plaques are found in the brains of people suffering from Alzheimer’s disease.

“If you could inhibit GSK-3 with lithium or anything else, you would reduce both tangles and plaques, which is what we’re trying to tease out with the mechanisms in the lab,” she says.

MacPherson says there is an urgency to the research.

“A large amount of our population is moving towards the 65-plus age range, which some are calling the ‘silver tsunami’ because there are so many of these people,” she says. “This is something we need to be proactive about.”