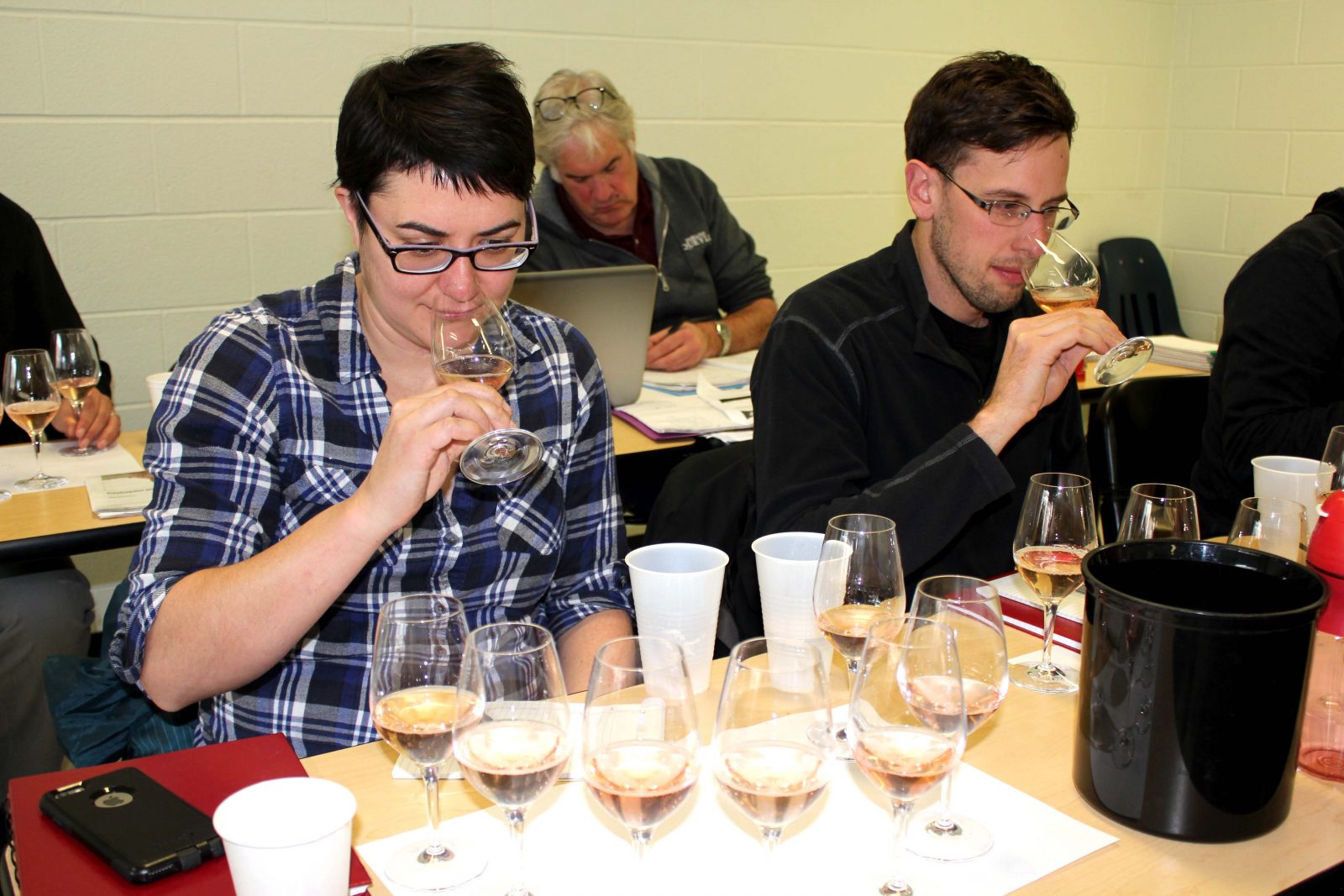 As wine consumers begin pondering which bottle of bubbly to serve this holiday season, 40 winemakers from across Canada gathered at Brock University to swap secrets for making the best sparkling wine.

Restricted to sparkling winemakers only, the sold-out event allowed those in the industry to discuss triumphs and challenges and to learn about new research projects taking place at CCOVI and around the world.

The theme this year was From Field to Fizz, which took a vine-to-glass approach for the first time by including research and discussions on both viticulture practices and winemaking, including CCOVI research on leaf removal, clones and soil type trials and their impact on sparkling wine quality.

CCOVI senior oenologist Belinda Kemp, who has been organizing the event since its inception in 2013, said she is excited by how much the event has grown.

“When we started this, there were fewer than 40 wineries making sparkling in the province and most of the winemakers who attended Fizz Club were based in Niagara,” she said. “Five years later, the event continues to sell out and we have winemakers coming from all across Canada, which is fantastic.”

The growth in popularity of Fizz Club is reflective of the massive growth in the sparkling wine industry. As Kemp pointed out, the number of wineries with a sparkling wine program in Ontario has ballooned to 90 and is constantly increasing. This year’s Fizz Club drew in attendees from across Ontario as well as B.C. and Nova Scotia.

According to the Canadian Vintner’s Association, the highest VQA wine growth category over the past year was sparkling rosé and sparkling white wine, with 12.5 per cent and 5.2 per cent growth, respectively.

Norm Cole, owner of Artus Bottling in Penticton, B.C., said he made the trip to Fizz Club after hearing buzz about it from the west coast wine industry.

“Like Ontario, there’s a huge thirst for sparkling wine knowledge in B.C.,” said Cole, whose company produces sparkling wine for wineries across the province. “It’s not easy to keep winemakers sitting in a room for a full day, but Fizz Club kept their attention that whole time. That tells you something.”

Brock grad Emilie Aubie (OEVC ’13), who is currently a winemaker at Andrew Peller Limited, said it was great to come back to Brock and learn about CCOVI’s new research, which was shared by Kemp and CCOVI senior viticulturist Jim Willwerth.

“You really see such a difference in those research wines that we tasted and it’s really exciting to know that what you do out in the vineyard really impacts the final product,” she said. “We all know that it does, but you can’t do the kinds of research trials that CCOVI does in the winery, so it’s exciting to see the viticulture differences play out in the wines.”

Thomas Bachelder, who attended Fizz Club for the first time this year, agreed that having access to the latest research is extremely beneficial to the winemaking process.

“It’s special because we don’t have this, that I know of, for any other wines and it’s very strong that Brock is giving us this platform,” he said. “Even the long-term winemakers with a lot of experience are here because they are in awe of what’s being done. We can’t do this on our own — we’re producers not researchers — so it’s great to see the research on this broader scale from CCOVI.”

Bachelder, who has worked both in the local wine industry as well as internationally in Chile and France, said he is excited about the explosion of the sparkling wine market in Canada.

Part of getting to the top of the pyramid, he added, is the learning and networking  opportunities that are available at events like Fizz Club.

“Being here at Fizz club really makes you feel like you are in the middle of something big that is happening and if you listen to the research being presented, and the enthusiasm from everyone, you really feel like this is going to help catapult us forward as an industry,” he said.