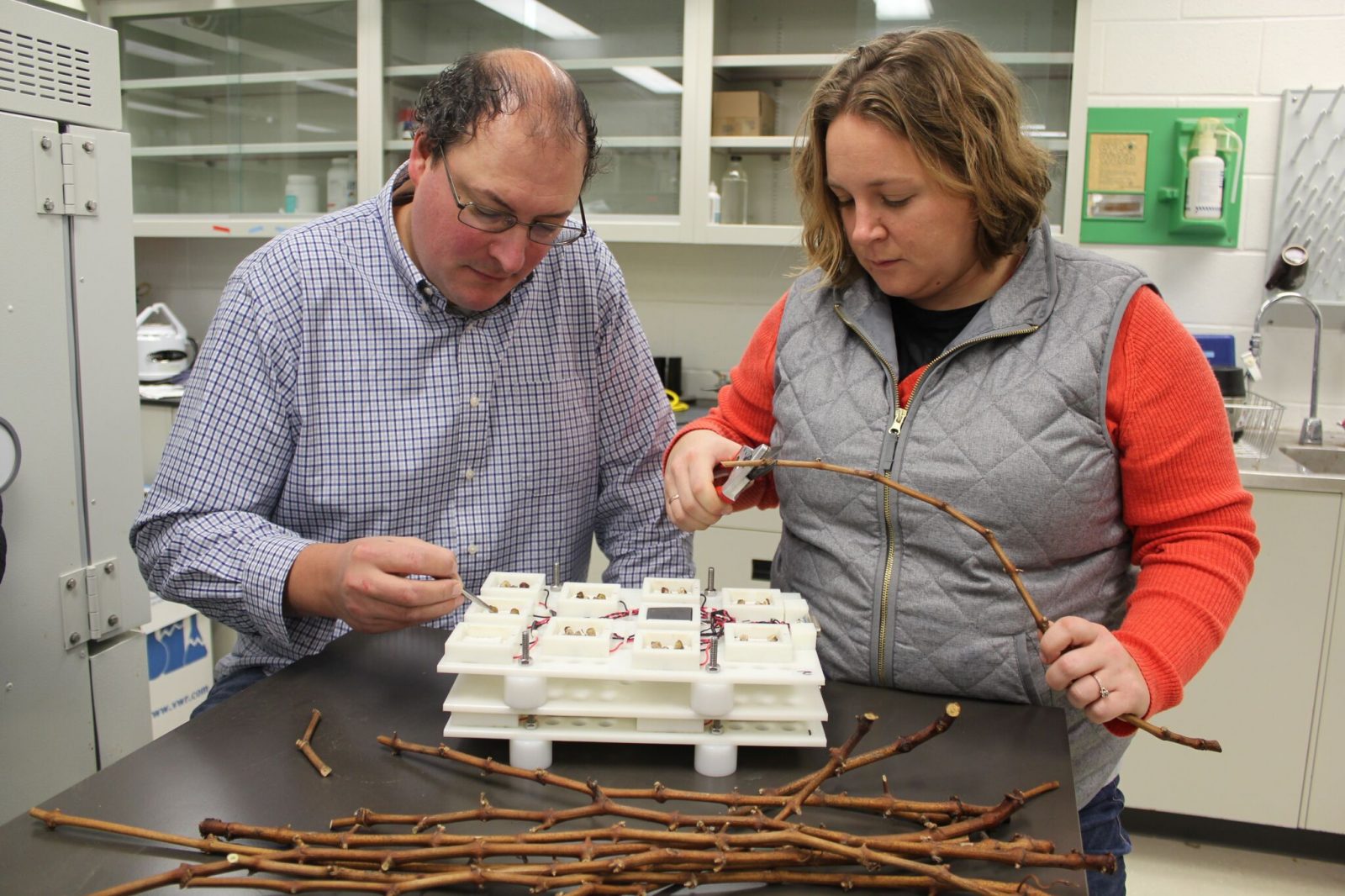 CCOVI’s VineAlert program is back underway providing crucial data to growers and researchers about how cold-hardy grapevines are within a specific area. Senior viticulturist Jim Willwerth and his lab technician Stephanie Bilek are collecting samples from vineyards across Ontario to further bolster the cold hardiness database they have been compiling over the past nine years.

With erratic temperatures and extreme weather events on the rise, researchers at Brock University’s Cool Climate Oenology & Viticulture Institute (CCOVI) are working to make vineyards across the region more resilient to climate change.

After experiencing an unusually mild October, southern Ontario was blasted with a mass of frigid air that caused a record-breaking cold snap in early November — putting grapevines at risk for early frost injury.

When the mercury plummeted, CCOVI researchers were already out in the vineyards collecting bud hardiness data for the VineAlert program. By also collecting data on grape bud survival rates after cold weather events, the Institute is able to give growers direction on how to manage any damage vines may have sustained.

“Thankfully, we had some data available and it didn’t get cold enough to damage the vines based on our preliminary bud survival data,” said Jim Willwerth, CCOVI’s senior viticulturist, “but the extreme variances in temperature are especially problematic when the grapevines are early in their cold acclimation process.”

Now in its ninth year, the VineAlert program tracks a grape bud’s ability to survive cold temperatures over the dormant season, from October to April, across Ontario’s key grape producing regions.

During that period, alerts indicating which grape varieties may see damage during a cold weather event are sent out to growers and researchers. This allows them to determine when they should utilize their wind machines or other freeze-avoidance technologies.

“VineAlert allows us to correlate real-time weather data with what is actually going on in the field,” said Donohue, who also graduated from Brock’s Grape and Wine Technology certificate program in 2002. “We can adjust some of our strategies for field operations to help us to get to the safest level of dormancy going into the winter months.”

Willwerth said monitoring the hardiness of the region’s grape buds is especially crucial in periods with volatile temperature fluctuations, including the shift from the cold below-average temperatures of early November to the above-seasonal temperatures experienced at present.

“With all these ups and downs in temperature, we worry the plants won’t acclimate well or they might de-acclimate prematurely, leading to spring frost injury,” he explained.

As weather patterns continue to become more unpredictable, it’s also important to monitor conditions on a long-term, historical basis in order to use that data to understand and predict the vines’ response.

That’s why CCOVI researchers will be sampling more grape buds than usual this year in order to further bolster their cold hardiness database.

The goal is to improve predictive modelling to help growers better understand how their vines will react during erratic weather conditions.

Willwerth said the years of data will help researchers “further understand how growing season and variable winter conditions impact hardiness, which will allow us to better protect the vines and better understand how viticulture may change in the future.”