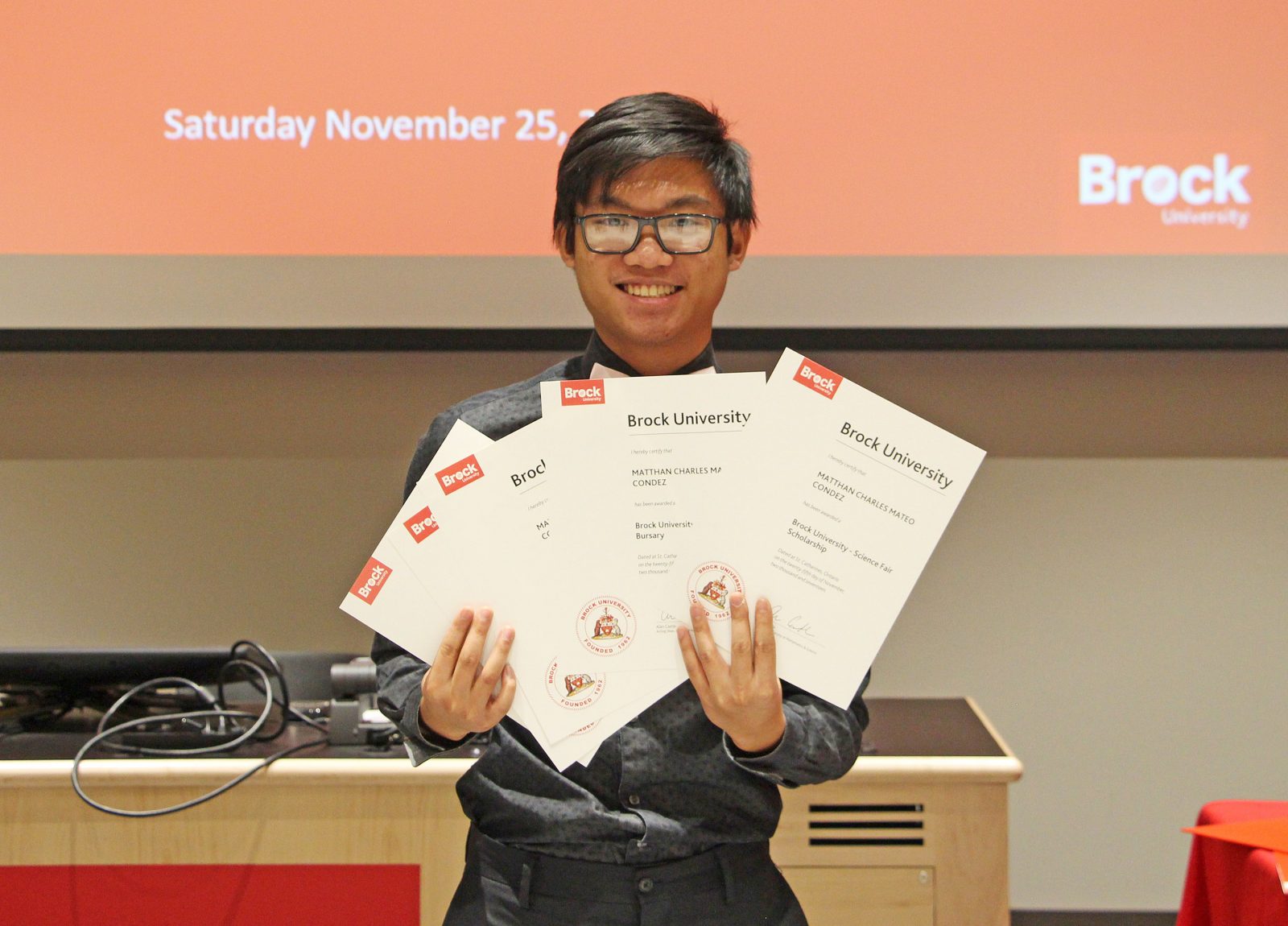 Just a few days shy of his 19th birthday, Matthan Condez was given several more reasons to celebrate.

The second-year Biochemistry Co-op student was honoured with five awards at the Nov. 25 Faculty of Mathematics and Science Celebration of Student Excellence.

“There is so much that goes on behind-the-scenes to maintain a good GPA: a good social life, good personal health, all while striking a balance,” he said. “I’m grateful to my colleagues and the people who have helped get me to this point.”

The Niagara Falls native was among 150 students, family members, faculty and staff who filled the Sean O’Sullivan Theatre for the 10th annual awards celebration. 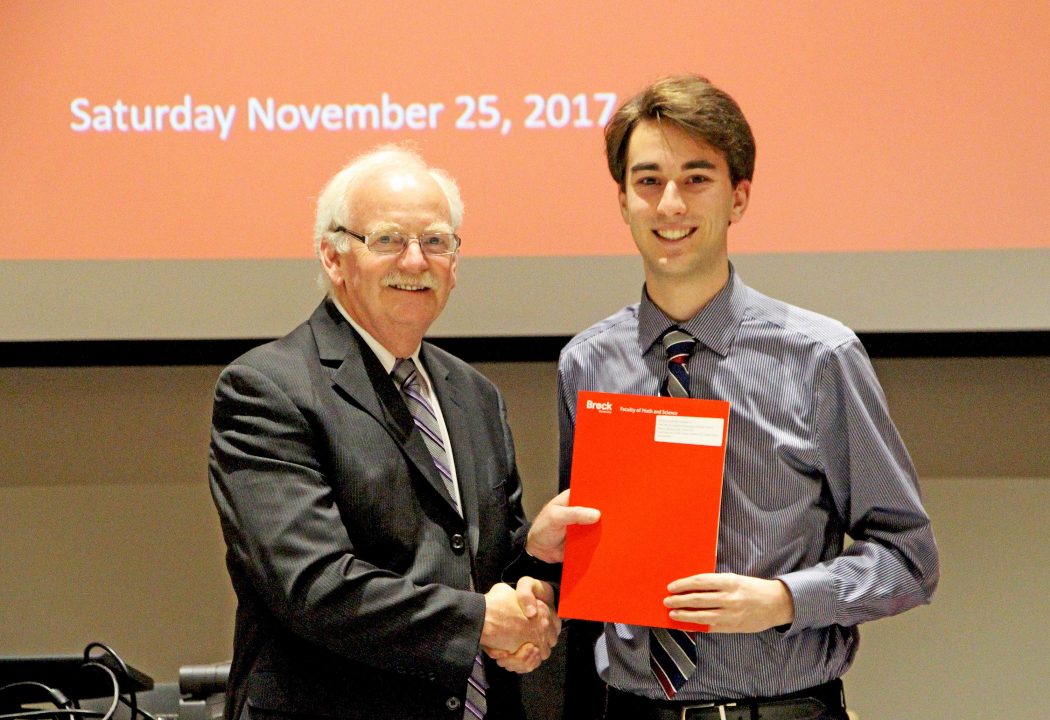 Held every November, the event celebrates the academic excellence of mathematics and science students. This year’s celebration recognized undergraduate students named to the Dean’s Honour List, and saw more than 50 donor-funded scholarships and awards presented.

From scholarships and bursaries to memorial and program-specific awards, many students were honoured for their efforts and achievements. Twenty-five students received three or more awards during the night. The highest number of awards  — six in total — was presented to Computer Science student Pawel Jocko.

For Condez, the path to success at Brock began with a unique opportunity in his final year of high school when he joined 20 other local students to participate in the University’s long-running Science Mentorship Program. The program, which links gifted senior secondary school students to Brock mentors from various disciplines, provides participants with the opportunity to pursue a real-life scientific investigation under the supervision of a faculty or staff member in a university laboratory environment.

With the help of Holly Galinec, a classmate from St. Michael’s High School, Condez worked to design a system that used a webcam to detect distracted driving. Mentored by Tom MacDonald, who works in Brock’s electronics shop, the two created their Distracted Driving Awareness System, teaching themselves the required coding along the way.

The project earned the pair a bronze medal at the Niagara Regional Science and Engineering Fair. 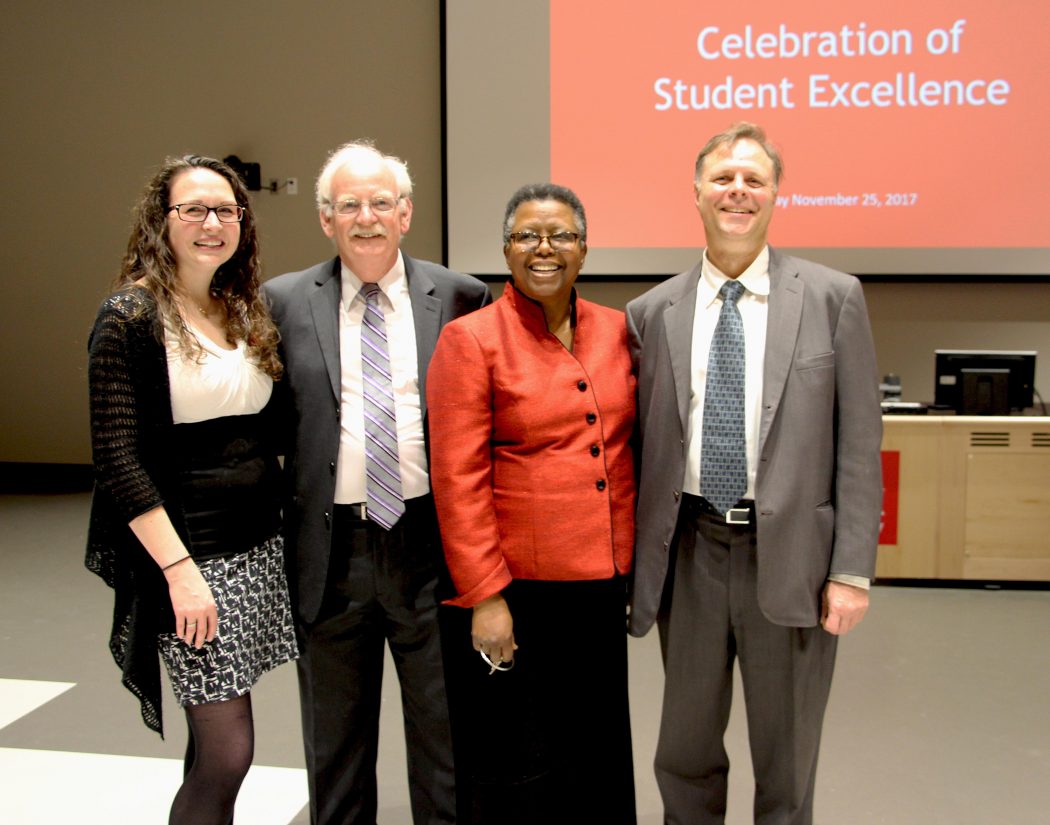 An early glimpse into university life and the chance to meet and work with like-minded people prompted both Galinec and Condez to pursue STEM degrees at Brock. Galinec, who also received several awards at Friday’s event, is currently studying computing and solid-state device technology.

Condez was quick to note that Brock’s generous donors and extensive pool of scholarships and awards was another reason he chose to study at the University.

Brock’s Student Awards and Financial Aid application, OneApp, which makes it easy for students to apply to hundreds of awards and bursaries at once, was a key factor.

OneApp made education “much more feasible for me financially,” Condez said. “Using this system, I was able to win many scholarships, making tuition and auxiliary fees more affordable.”

The University environment has also played a role in Condez’ success, as it has nurtured his passion for science.

“Meeting like-minded people at Brock really made me feel integrated in the university culture,” he said. “Having discussions about science, discussing theories, future aspirations, struggling together and getting through it all made me thoroughly enjoy my first year.”