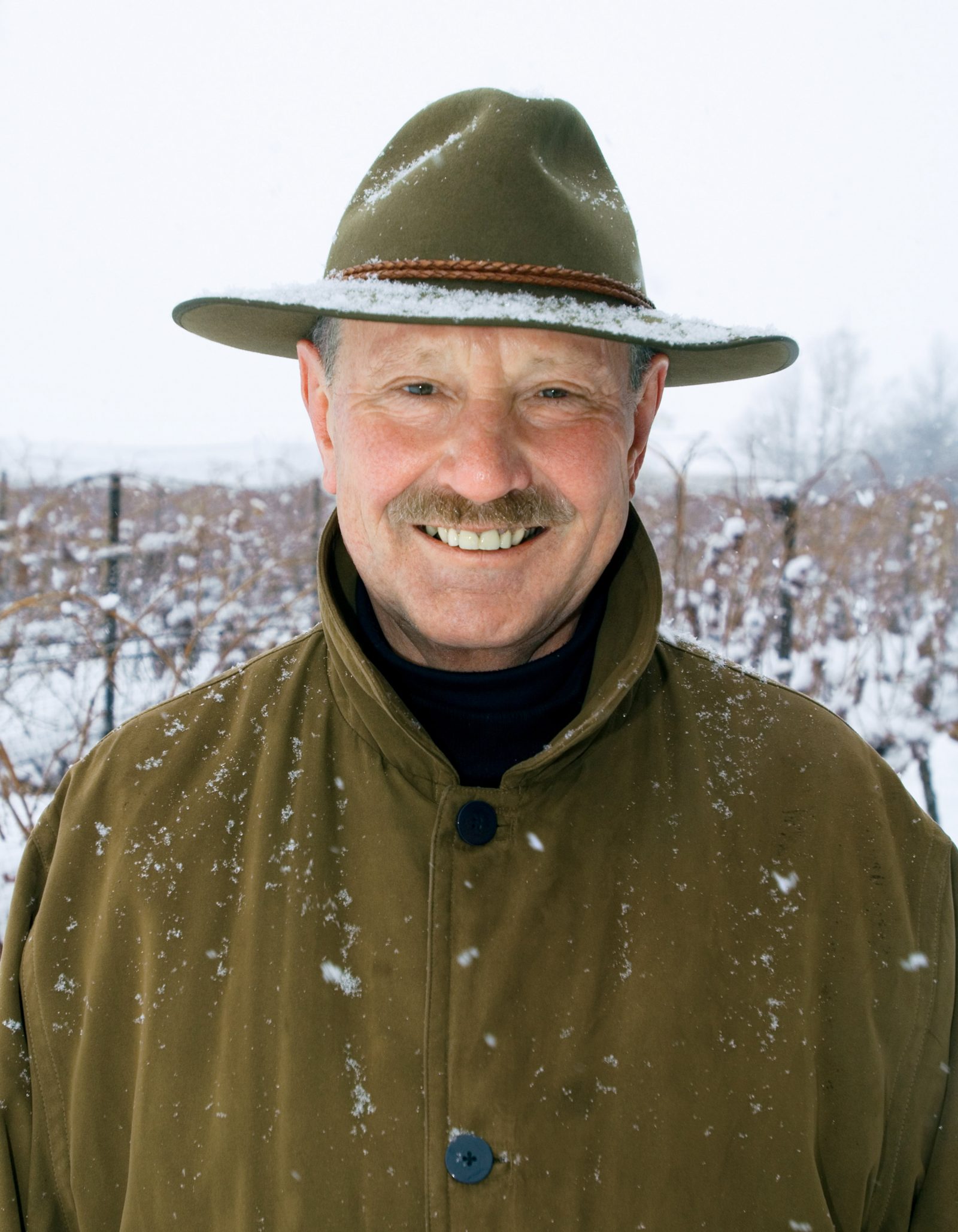 Inniskillin Winery co-founder Karl J. Kaiser, an industry pioneer and a key figure behind Brock’s oenology and viticulture programs, who passed away in November 2017.

The Brock University community is mourning the death of a national figure and longtime associate who helped forge Brock’s leading role in grape and wine research, while also turning Niagara into a world-renowned wine region.

Inniskillin Winery co-founder Karl J. Kaiser, an industry pioneer and a key figure behind Brock’s oenology and viticulture programs, passed away on Wednesday, Nov. 22. He was 76 years old. 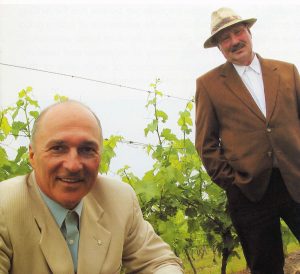 “Karl truly believed that a successful wine region needed a research institute to support it,” said Inglis. “And he was passionate about passing his knowledge on to the next generation.”

Kaiser’s love of wine research and his connection to Brock, where he graduated from in 1974, was something he took pride in.

“I always felt very honoured by being a part of Brock’s CCOVI as an affiliate,” Kaiser wrote in his final email to CCOVI Communications Specialist Sarah Moore recently. “It always has been great enjoyment being part of CCOVI in this way.”

Born in Austria in 1941, Kaiser immigrated to Canada in 1969 with his wife Silvia. After graduating from Brock’s chemistry program in 1974, Kaiser was experimenting with winemaking, which led to a connection with Donald Ziraldo, a greenhouse owner who was providing Kaiser with grapes for his hobby.

“They both believed Ontario could produce better wine,” said Inglis, who first met Kaiser when she was 14 and working on her family’s grape farm.

Receiving the first Ontario winery licence since 1920, Kaiser and Ziraldo launched Inniskillin Winery in 1975, and began making wines that would ultimately put Canada on the world map for the industry. The difference between what Inniskillin was making and what was being produced in Ontario was the use of Vitis vinifera wine grapes rather than lower quality juice grapes.

“It was a huge change for what was known in the industry at the time. But it was through their initiatives that the industry started to transform and we gained notoriety and respect,” Inglis said. 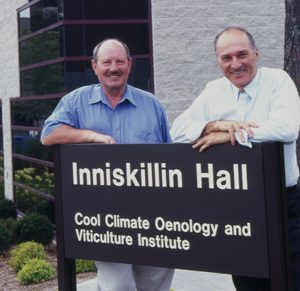 Karl Kaiser and Donald Ziraldo at the opening of Brock’s Cool Climate Oenology and Viticulture Institute in 1999.

The biggest turning point came in the 1980s, when Kaiser and a handful of other Niagara winemakers started experimenting with icewine production. Kaiser’s 1989 Inniskillin Vidal Icewine won the highest-available prize at the 1991 Vinexpo in Bordeaux, France, putting the international spotlight on the Canadian wine industry and establishing Kaiser as the world’s leading expert on icewine. He also loved the challenge of making high-quality Pinot Noir in Niagara, a passion he carried with him throughout his career.

“He was never comfortable being in the limelight and taking acknowledgement for all that he achieved and what he put forward,” said Inglis. “He was a very understated individual.” 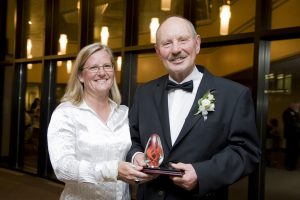 CCOVI Director Debbie Inglis with Karl Kaiser when he was awarded the Faculty of Math and Science Distinguished Alumni Award in 2009.

It was Kaiser’s desire for wine research and knowledge that, together with other industry pioneers, led to the development of CCOVI in 1996. He was part of the industry group that developed the concept for the institute that year, as well as the OEVI undergrad program that followed in 1997.

Kaiser developed the OEVI wine chemistry course and was its first instructor in 1998. He became a CCOVI Professional Affiliate and returned on a regular basis to give lectures and seminars, the videos of which are still among the program’s most downloaded.

Rob Power, a student in that first wine chemistry course, said it was both cool and slightly intimidating to be taught by one of the country’s best and most well-known winemakers.

“The best parts of the class were when Karl went off script. That’s when we learned some real winemaking at the feet of the master,” said Power, who is now the winemaker at Creekside Estate Winery. “He kept us all enthralled by slipping in anecdotes and tips.”

Kaiser was also a researcher, working with Inglis and others to understand more about icewine fermentation and production.

“Karl co-wrote a book and was an active researcher, but not many people realize it because he was such a humble individual,” she said. “He was a teacher and a mentor.

“For me personally, he believed in me as a scientist and that meant the world to me. It really launched my career in icewine research.” 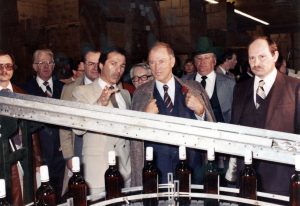 A celebration of life for Kaiser will be held from 5 to 9 p.m. Friday, Dec. 8 at The Hare Wine Co., 769 Niagara Stone Road in Niagara-on-the-Lake. Written messages of condolence can be left on Kaiser’s memorial website found here.

In lieu of flowers, the family is encouraging donations to the Dr. Karl J. Kaiser Memorial Fund at Brock’s CCOVI. The fund has been launched in honour of Kaiser’s love of learning and sharing his knowledge. Donations can be made at brocku.ca/donate or by phone at 905-688-5550 x4190.