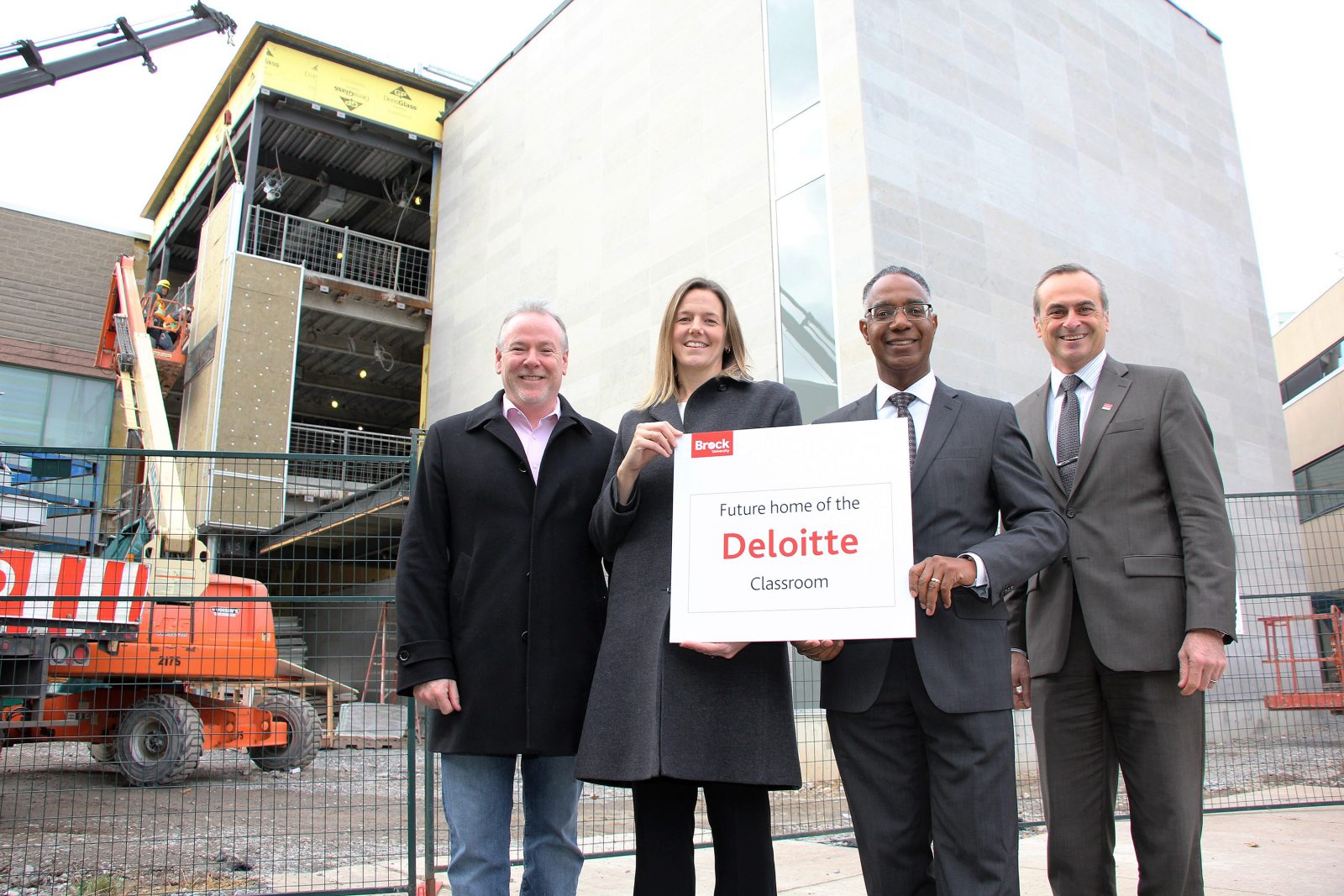 From left, Deloitte Canada’s Doug Wilkinson and Pam Lilley along with Brock University President Gervan Fearon and Goodman School of Business Dean Andrew Gaudes stand in front of the portion of the Goodman expansion project that will house the state-of-the-art Deloitte classroom.

Doug Wilkinson wanted to give back to the university that launched his career, and he did that in a big way Wednesday.

Brock University and the Goodman School of Business announced Wednesday, Nov. 22 that long-time business partner Deloitte Canada has made a gift of $250,000 to name a 45-seat classroom in the $22-million Goodman expansion project.

As a senior partner who has spent nearly 30 years at Deloitte, Wilkinson (BBA ’91) was largely responsible for making the major gift a reality. But in recognition of the impact Brock has had on his life, he has also made a generous personal donation to the University, which will fund a new co-op interview room in the new Goodman atrium and will be named in Wilkinson’s honour.

“I attribute my career success at Deloitte to the education I received while at Brock University and it means a lot to me to be able to give back in such a meaningful way,” said Wilkinson.

Deloitte Canada has benefitted greatly from the talent that comes from Brock over the years, and said it was proud to support the Goodman School of Business expansion project.

“Deloitte is passionate about giving back to the communities we serve and our donation today supports our motto ‘Tomorrow, Together’ in ensuring the success of the next generation of Brock alumni,” said Deloitte Partner Pam Lilley. “We are grateful to Brock and its professors who have made a significant contribution to the successful careers of many of our partners and professionals.”

“Through Deloitte’s leadership, support and generosity, our students will have access to a state-of-the-art learning environment where our faculty will prepare them for their future careers,” Fearon said. “The University is committed to providing Goodman School of Business students with the resources to gain confidence, build leadership skills and make an impact using hands-on learning opportunities.”

Wilkinson began his career at Deloitte as part of the co-op program while he was a student at Brock three decades ago. At the time, Associate Professor Allister Young accepted him into the co-op program and played an integral role in his success as a student. They’ve kept in touch over the years.

“Through my co-op experience at Brock I was able to see the world of business as a student and am proud to now work alongside so many Brock co-op alumni at Deloitte,” he said.

He received the Goodman School of Business Distinguished Graduate Award in 2002 for his exceptional professional achievements and service in giving back to society. Five years later, he received an Alumni of Distinction Award from the Brock University Alumni Association as a part of the 30 Distinguished Alumni Awards from the past 30 years.

“I have always given my time and talent back to Brock as a member of the Business Advisory Council and am now lucky enough now to be in a position to give back in a philanthropic way,” said Wilkinson.