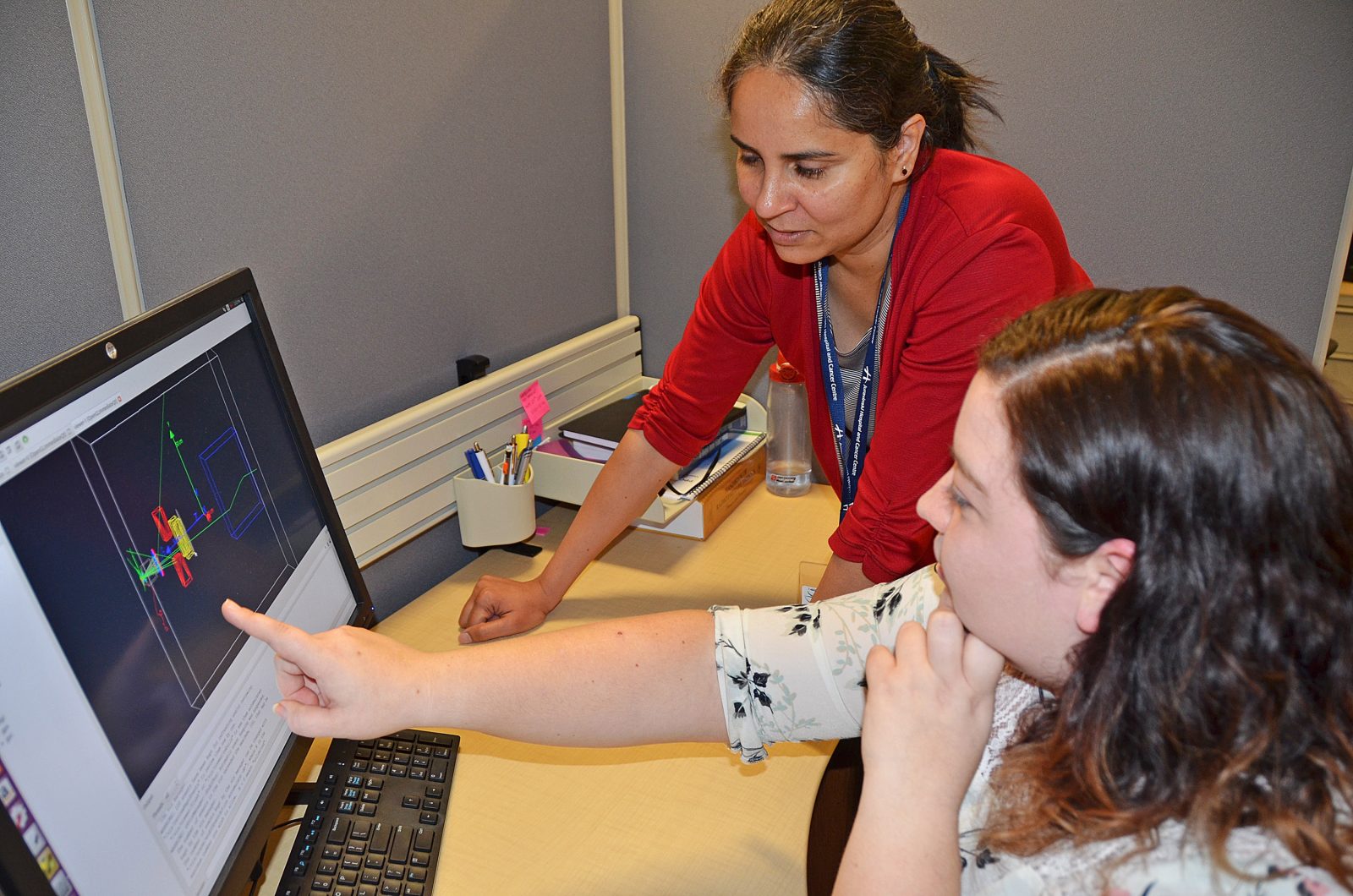 Martin has been working closely with Dr. Ranjini Tolakanahalli, Manager of the NHS’s Department of Medical Physics at the Walker Family Cancer Centre, to improve the effectiveness of external beam therapy, a common cancer treatment.

Patients lay under a radiation machine called a linear accelerator, which focuses high-energy beams on a tumour to kill the cancer cells within it. Radiation beams of precise shapes are aimed from various angles so as to deliver the maximum dose to malignant cells while minimizing exposure to normal tissues.

A linear accelerator speeds up electrons and aims them to hit a section of the machine called the target, which is made out of the heavy metal tungsten. This collision results in the generation of high-energy X-ray photons, particles of light that are at much higher energies than common medical X-rays.

The X-ray beam is focused on cancer cells in the tumour site.

Once in the body, the photons are absorbed by atoms within the cancer cells by producing electrons, which deposit energy from the radiation dose into the cells.

Linear accelerators are constantly tuned to high precision to ensure the accurate delivery of radiation beams.

The place where the beam hits the tungsten target – the ‘beam spot’ – has to be precise. If it veers off to the edge of the target, it could affect the quantity and quality of the dose going to the cancer cells.

Manufacturers give wiggle room of about 13 per cent to the precise location of the beam spot on the target, but the impact of that variation on the dose delivered  is not well understood.

As a result, Martin has made that impact the focus of her research.

To help medical physicists better understand how a change in beam spot location affects radiation treatments, Martin is creating a computer model to simulate the movement of electrons and photons in the linear accelerator.

To do so, she is using a scientific prediction model called ‘Monte Carlo.’

“An electron could go in a million directions,” explains Tolakanahalli. “Once it hits a particle, there are multiple things it could encounter; it could go this way and interact with the next thing in its path or maybe get deflected and interact somewhere else. Or maybe lose its energy instead of getting deflected. The electron can take so many different paths.”

Being able to predict the movement of electrons and photons is important so that the beam reaches the diseased cells without affecting healthy cells.

Martin says it’s “interesting to see how physics applies in the real world.”

While she has enjoyed school-based research, it has been rewarding to see how her most recent work “interacts with and can affect people in their lives.

“I’ve always wanted to help people, but I never wanted to be a medical doctor. This is a really happy medium where I can help people but continue doing the thing that I love, which is physics.”

Martin runs her simulations on the super-computing facilities of Compute Canada and the Shared Hierarchical Academic Research Computing Network, or SHARCNET, of which Brock is a member.

She is working under the direction of Tolakanahalli, medical physicist Dr. Josef Dubicki and Brock University Associate Professor of Physics Thad Harroun.

Both Tolakanahalli and Martin say they are thrilled with the Brock-NHS partnership.

“The ability I had to work at the hospital in partnership with Dr. Harroun and everybody who works here is fantastic,” says Martin. “It’s really interesting to find out all the places physicists can get work and how applicable our skills set is to a lot of different aspects.”

Tolakanahalli says a “significant portion of our work is contributing to the research area.

“It cannot happen if we don’t have such close collaborations with Brock University and the students putting in their dedicated hours. It’s a dream come true to have this.”