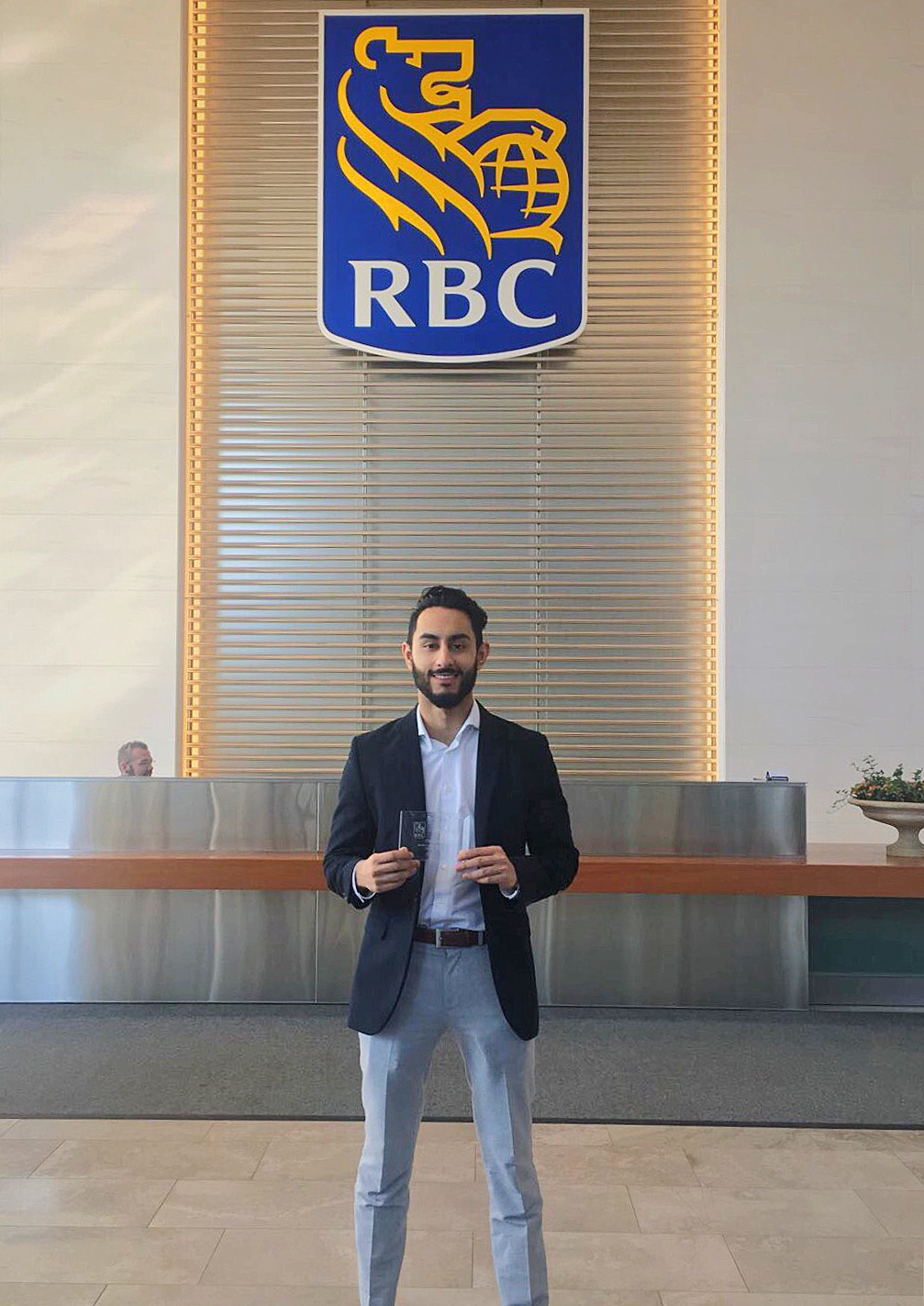 Fourth-year Bachelor of Business Administration student Chris Jitla was recently honoured with the RBC Student of the Term award.

Chris Jitla is setting the bar high for co-op students at Brock and across the country.

The fourth-year Bachelor of Business Administration student in Brock’s Goodman School of Business was recently named the Royal Bank of Canada (RBC) Student of the Term.

Jitla was one of three winners chosen out of 103 nominees who were selected from a pool of more than 1,200 students in co-op positions at RBC across Canada.

The 22-year-old Burlington resident spent his summer co-op work term as a resolution officer with RBC in Toronto. The role saw him matching and reconciling balances between accounts and gaining relevant experience that he hopes to use in his career.

One month into the four-month term, Jitla was approached by his manager who, impressed by the student’s dedication to the job, mentioned he was deserving of a nomination for the coveted RBC award.

Jitla quickly set thoughts of awards aside and continued to follow the valuable advice his manager had previously provided. It was that advice that helped put him on the path to earning the honour.

“He told me to contribute to the role as a full-time member would,” Jitla said. “That meant taking on a lot of responsibilities. Some students just do what they are told, but I wanted to become an actual member of the team.”

Jitla took the advice to heart and embraced the challenge.

“I attended a lot of events to learn about the company,” he said. “I did tons of networking and was very involved. I worked as hard as I possibly could.”

After completing a successful work term between May and August, Jitla was honoured at RBC’s end of term event with the award and a commemorative plaque.

Alyssa Citrigno, RBC’s Senior Recruiter, Talent Acquisition, emphasized the importance of the award to the organization and to the students who win it.

Jitla is proud that receiving the award goes beyond personal accomplishment to also reflect positively on Brock as a whole.

“I was very proud of being from Brock and winning the award,” he said. “The playing field is level in the workplace, and I was able to represent the University well and show all that Brock has to offer.”

Julia Zhu, Brock’s Associate Director, Co-op Education, highlighted how much Jitla’s accomplishment meant to the Co-op brand and to the University.

“Chris’s accomplishment, winning the RBC Student of the Term award, serves as an inspiration for the entire Brock community,” said Zhu. “The superb effort he put forth in his work term has enhanced the profile of our Co-op Education brand, provided inspiration for other co-op students and helped him to hit the ground running in his career.”

The surprise of winning such a prestigious award has not worn off on Jitla.

“It was very fulfilling to get an award out of such a large pool of talented individuals at Canada’s biggest company,” he said.

As he prepares to pursue a career in finance, Jitla offered a last piece of advice for those thinking of taking on a co-op experience of their own.

“It’s a must,” he said. “Co-op changes your university experience. You graduate with more than an education. You have experiences that set you up for success in the future.”