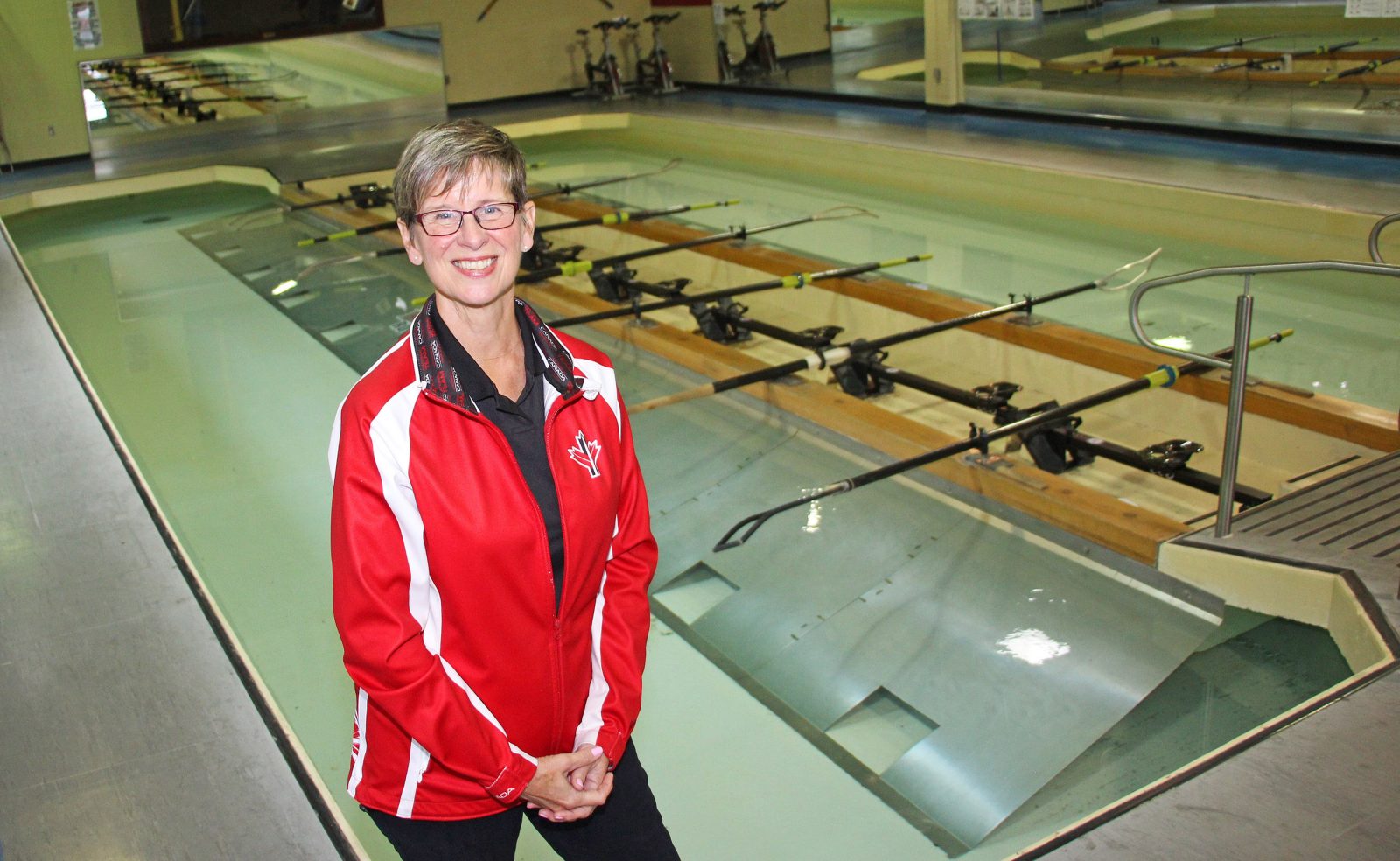 Alumna Carol Purcer in the Leo LeBlanc Rowing Centre at Brock University where she visits often as part of the program she developed to introduce high-risk youth from the Niagara region to the sport of rowing.

Carol Purcer (MEd ’07) has never been one to shy away from a challenge.

That determination to push forward led the St. Catharines native down a path to success at Brock and, more recently, saw her appointed to the helm of Rowing Canada as the organization’s new President.

Purcer’s days as a mature student at Brock University meant balancing her studies alongside family life and a full-time career as a post-secondary teacher, which she knew would be no simple task. Mix in a splash of her after-school passion for rowing and it meant a full plate.

The lifelong learner spent many late nights hitting the books and cramming study time into busy weekends as she pursued her Master of Education while taking care of her husband and three children.

It was tough, but she knew the hard work would be worth it in the end.

“I remember bringing my youngest to swimming lessons here at Brock and watching her while trying to complete a reading for class, it wasn’t easy but that was the role I played at the time,” she said.

The university experience pushed Purcer to succeed. She became determined to give back to Brock and to help other students find their strengths.

The chance to do just that arose earlier this year and the avid recreational rower jumped on the opportunity.

Purcer created a rowing program in partnership with Brock that invited the University’s varsity athletes to coach high-risk youths in Grades 6 to 8 from schools across Niagara.

It was a move that meant a lot to the 60-year-old alumna.

“I want to change the trajectory of at-risk youth,” she said. “If we coach these high-risk youths as students and teach them how to row, workout and get involved in extracurricular activities, they will have a better experience transitioning into high school.”

Purcer has been involved in Niagara’s rowing community for more than 20 years. After three years sitting on the Board of Directors for Rowing Canada Aviron, she was recently named the organization’s President.

“I am proud of the current position I am in and the goals I have set out for myself and for Rowing Canada to pursue over the next four years,” she said.

During her four-year term, Purcer wants to grow interest in rowing as a professional and recreational sport and get people of all ages out on the water.

She also hopes to develop a national coaching strategy and create a clear pathway for experienced individuals to have the opportunity to becoming high-performance athletes.

“I want to promote rowing for all its great qualities. Every rower doesn’t have to be out there at 5 a.m. practising for competition. I want everyone to get involved,” Purcer said.

She recently spent time travelling across the country listening to what stakeholders expect from the new President. She has high hopes she’ll be able to meet those expectations while working to improve rowing in Canada.

“Although I don’t know what the next four years will look like, I want to work hard and be able to look back and see the improvements that have been made,” she said. “I want to be the catalyst of change for Rowing Canada.”