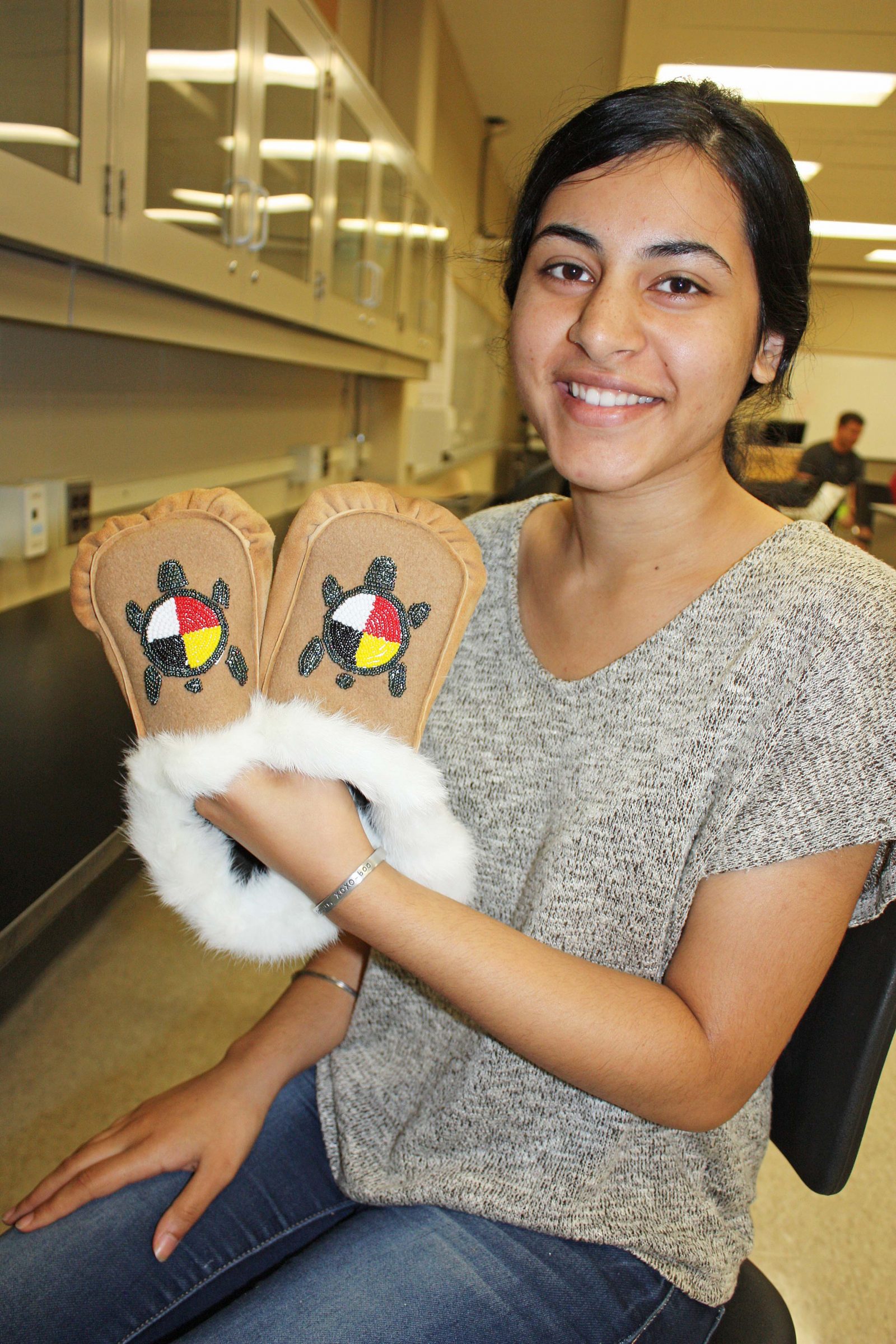 Student Sanjot Chattha displays the hand-crafted moccasins she made as part of an Indigenous Expressive Arts class this summer.

When they began creating handmade moccasins, more than half of the students in the Indigenous Expressive Arts class had never before threaded a needle.

By the end of the 30-hour project — one of several during the Brock summer course — they had used beads to embroider intricate designs on the hand-crafted shoes and learned all about the traditions behind them. 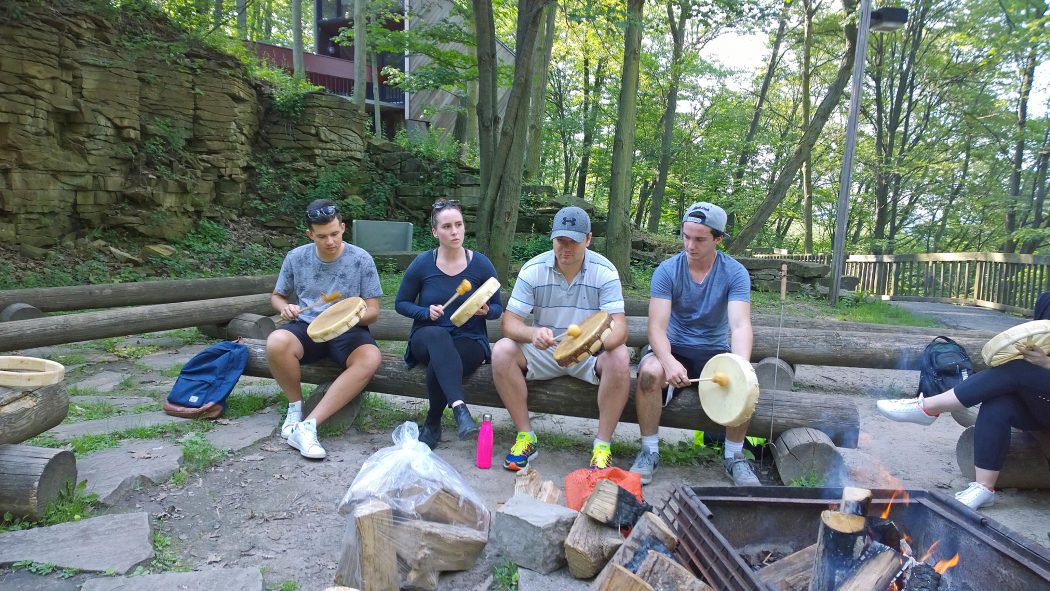 Students Brendan Burke, Jane Theriault Norman, Steve Cycyka and Michael D’Agostino sit around the Alphie’s Trough fire pit with the drums they made during their Indigenous Expressive Arts course this summer.

The hands-on approach was the brainchild of lecturer Sherri Vansickle, who hoped the method would help students to soak up the rich history of the indigenous community, while also gaining a better understanding of the community in present day.

“There were no essays, no required readings. The entire course was offered in the oral tradition,” said Vansickle. “It was an opportunity to do things in our original people’s way, in the Onkwehonwe way.”

That meant spoken word was of the utmost importance and if someone was struggling with a particular project, the class showed them support to help them overcome those challenges, Vansickle said.

Throughout the course, students tried their hand at soapstone carving and painting, and visited a Six Nations art studio to learn more about other mediums. They also created authentic Anishinaabe hand drums, for which a special drumming ceremony was later held.

Guest speakers often visited the classroom to walk students through the various projects, while also sharing their perspectives on the different forms of art and their connection to the indigenous community.

“This means the world to me — to be able to expose students to art they otherwise likely wouldn’t encounter, to be a part of something so authentic,” Vansickle said. “It teaches students to appreciate the value of something made by hand, and the values and traditions behind it.”

Students, both indigenous and non-indigenous, from across all Faculties participated in the course. 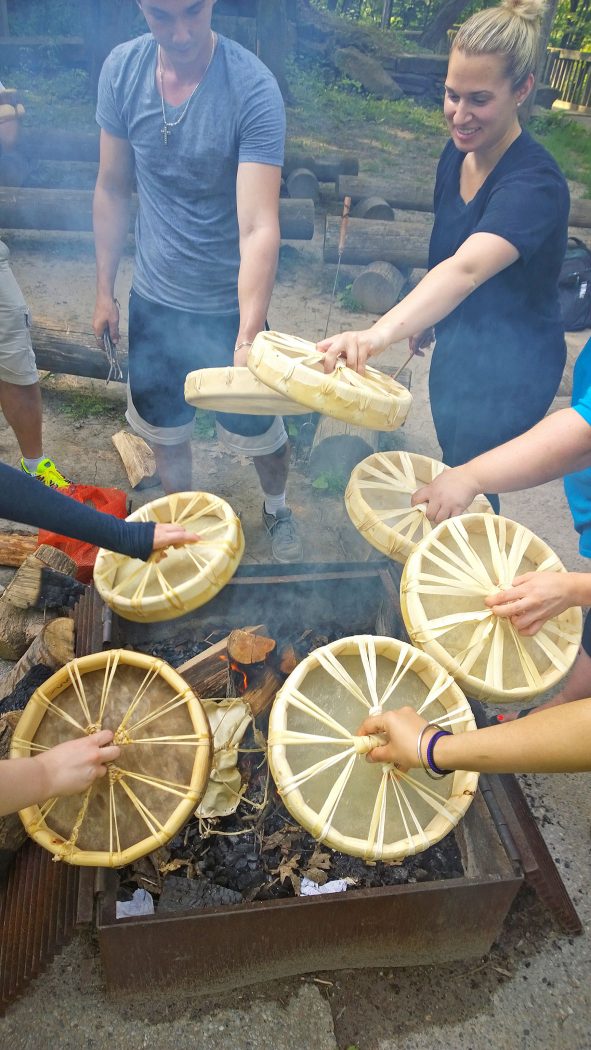 Students Michael D’Agostino and Michelle Galijet participate in a ceremony with their fellow Indigenous Expressive Arts classmates with hand drums created during the course this summer.

Second-year Kinesiology student Jane Theriault Norman credited Brock for its Indigenous Studies offerings, which she has enjoyed so much in her time at the University that she has chosen to minor in the subject.

The Toronto resident felt having the freedom to express herself while learning about indigenous culture in the recent arts class, which ended in August, was a particularly rewarding experience.

“The course is really unique for a university,” she said. “A creative arts class taught by a First Nations woman is pretty special. It’s hard to explain how special it truly is.”

Theriault Norman, who has indigenous ties in her family, said the class offered a “sense of healing,” despite covering intense and difficult topics such as residential schools, and missing and murdered aboriginal women.

Mixing art with that history provides an engaging and interesting way to share it with the broader public and to create awareness of Canada’s past, she said.

“When you sit down and spend 30 hours making a pair of moccasins, even though you may not realize it right away, it does tie you to the indigenous community — even if it’s just for a moment,” she said. “It offers a real chance for reflection.”