Class of ’67 ready to mark milestone anniversary at Homecoming 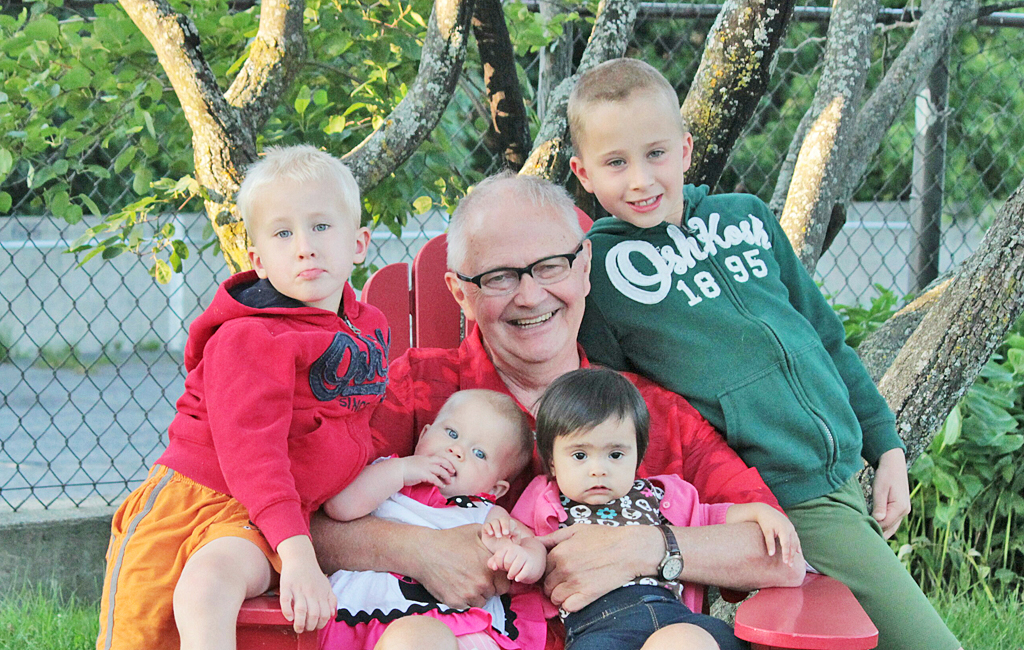 Brock alumnus Brooke Broadbent, centre, is pictured with his grandchildren Jimmy, Emily, Sophie and Danny. Broadbent will be returning to his alma mater for this weekend’s Homecoming celebration.

Mary Poppins was on the big screen, the Beatles ruled the airwaves and the first-generation Ford Mustang had just hit the road.

And in downtown St. Catharines, a small group of students gathered to attend the first classes at Brock University in the basement of St. Paul Street United Church.

Brooke Broadbent (BA ’67) remembers it like it was yesterday.

Then an 18-year-old Grade 13 student from Newmarket, Broadbent recalls when he first drove to Brock’s administrative offices at 15 Welland Ave. in St. Catharines, where he met with Registrar Ernest Goldsmith to discuss his high grades.

He was promptly accepted into Brock — joining what would become the University’s first graduating class.

“President (James A.) Gibson at the time invited me to attend Brock University and I remember casually meeting with the registrar while leaning on the window ledge in his office,” Broadbent said. “Looking back, the admission process seemed simple — although I know now that the requirements to succeed were stringent.”

He remembers his time at Brock being incredibly formative.

At Brock, the English major learned to express himself by writing weekly essays and used the seminar-based system to improve his confidence in public speaking.

“My first degree enabled me to move through life with great success,” he said. “The experiences at Brock University gave me the confidence to try new things. I have taken the opportunity to work around the world, published articles and books on a variety of topics and, as a lifelong learner, have learned other languages.”

The University’s ‘Porch Club’ provided Broadbent the opportunity to discuss current events after hours with his instructors and peers in a casual setting, which helped to develop lifelong relationships.

It’s those relationships that the now 72-year-old grandfather is most looking forward to reflecting upon as he travels from his home in Ottawa back to St. Catharines for Homecoming weekend.

“While I’m driving, my mind will fill with images of the people I met at Brock — fellow students, professors and girlfriends,” Broadbent said. “I will be thinking of what has transpired in my life to get to the point where I now have four grandchildren, speak two foreign languages fluently and that I am fortunate enough to live part of my life in Oaxaca, Mexico.”

When he graduated from Brock, it was his mother that noted what an important milestone it would be for him in the future. The moment he successfully completed his studies at the University set the tone for his adult life and gave him the self-confidence to succeed.

“I’ve always thought it would be significant to return on the 50th anniversary of our graduation. I feel incredibly emotional about it and I can’t believe that 50 years have sped by,” Broadbent said.

He will be among Brock’s first graduating class this weekend as they celebrate their golden anniversary at the Alumni Recognition Reception on Sept. 16 at 2 p.m. in Brock’s Lowenberger Dining Hall.