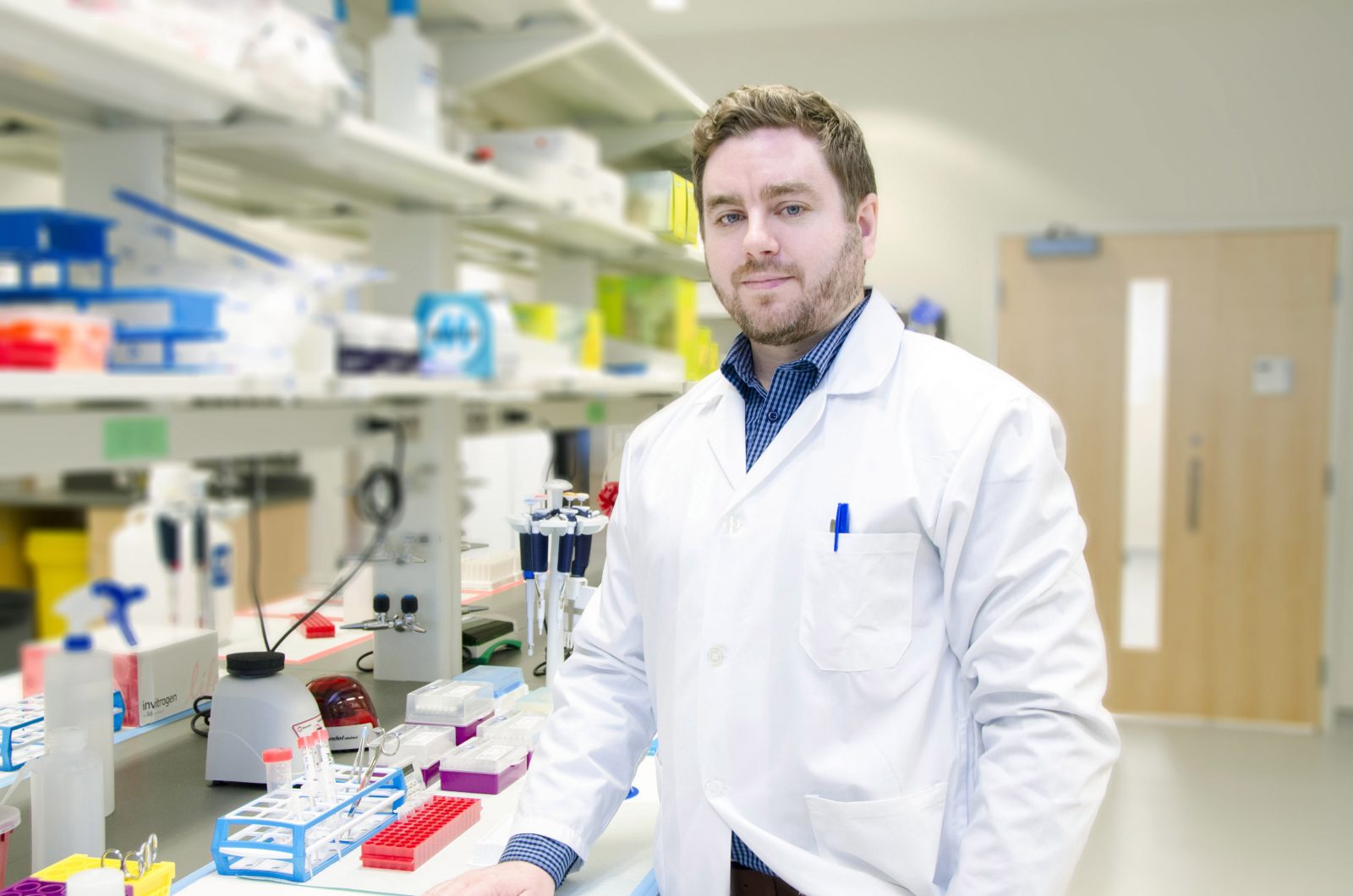 Adam MacNeil will use funding from the Canada Foundation for Innovation to continue his allergies research.

It’s the peanut that has Adam MacNeil so concerned.

Thinking back to his schoolyard days, the assistant professor in Brock’s Department of Health Sciences says children with peanut allergies were a rarity — a far cry from today’s youth.

“Allergies are absolutely an epidemic,” he explains, adding that up to 50 per cent of school-aged Canadian children suffer from allergic diseases. “It’s very much a combination of our environment, our immune system and how they interact with one another.”

MacNeil is one of two Brock professors who will be able to take their research further thanks to $311,821 in federal funding announced Tuesday, Aug. 15 by Minister of Science Kirsty Duncan. The research dollars, received through the Canada Foundation for Innovation John R. Evans Leaders Fund (JELF), will also benefit Kevin Turner.

The assistant professor in the Department of Geography and Tourism Studies spends his time examining temperature and landscape data gathered on his many research trips to a lake-rich area of the Yukon called Old Crow Flats, the traditional territory of the Vuntut Gwitchin First Nation. 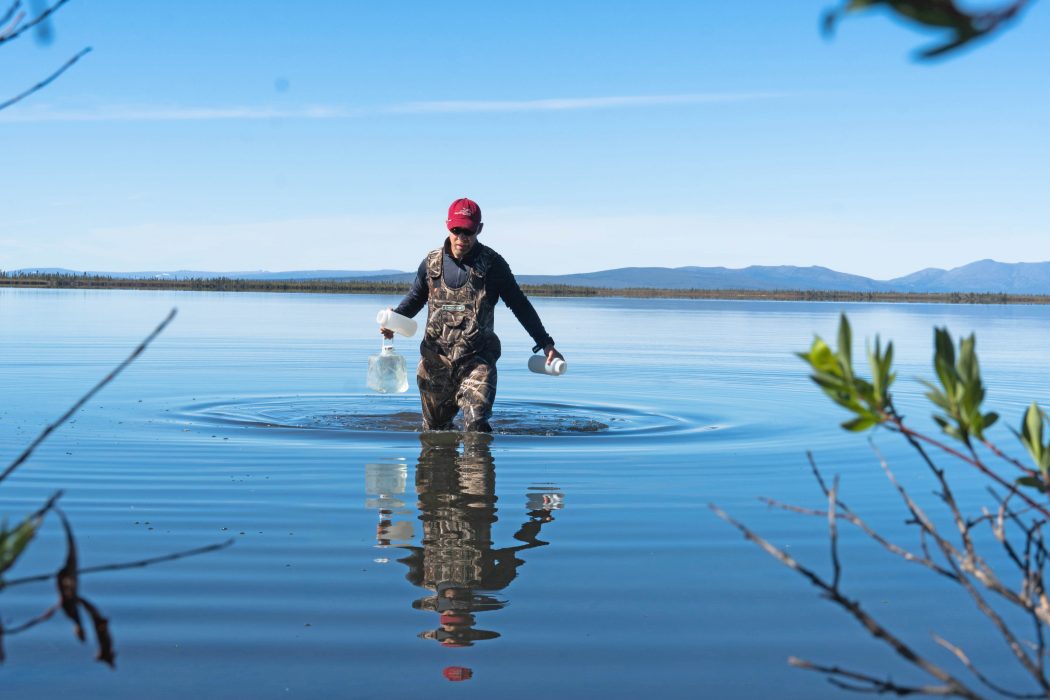 Kevin Turner will use funding from the Canada Foundation for Innovation to further his work on the impacts of climate change in the lake-rich area of the Yukon called Old Crow Flats.

“The North is a very important place to understand how climate is affecting the land, wildlife and natural resources because it is undergoing greater amounts of change than anywhere else,” Turner says.

JELF funding is used by the CFI to help Canadian institutions attract and retain top researchers, by providing the infrastructure they need to remain or become leaders in their field.

MacNeil’s research focuses on mast cells — specialized cells of the immune system that arise from stem cells. They normally play important roles in fighting infection and maintaining healthy tissues where they are found.

But mast cells can also act out and react to substances in the environment that pose no real threat. Known as allergens, contact with the likes of pollen, mould and certain foods, can cause mast cells to release various biologically potent substances leading to tissue damage.

The release of these biological substances causes inflammation, mucus production and other allergy symptoms.

“We’re looking at the molecular and genetic changes that happen to bone marrow-derived stem cells that allow them to ultimately become the mast cells found in other tissues,” MacNeil says. “We’re interested in how those mast cells then function and whether we can find innovative strategies to target mast cells and block their ability to create allergic inflammation.”

To find those strategies is no easy task. Samples that researchers pull from bone marrow contain a huge number and variety of cells that regulate all aspects of immunity. MacNeil says there’s a lot of “background noise” that interferes with examining the development of mast cells closely.

With his JELF funding, MacNeil will purchase a cell sorting and analysis suite — a group of instruments that will allow him to suck out and isolate stem cells developing into mast cells for intense examination.

Turner’s research, on the other hand, documents how the impacts of climate change are transforming the landscape of Old Crow Flats by eroding river shorelines, increasing shrub vegetation and destabilizing lake water levels.

Also of huge concern are the presence and movement of carbon in the area’s water system.

Rising temperatures are causing permafrost to thaw which, in turn, triggers ‘thaw slumps’ (landslides) in many areas, especially along river banks.

Carbon is a chemical element that is an important component of greenhouse gases.

Permafrost locks in large amounts of carbon, which can be released to lakes, rivers or the atmosphere, potentially perpetuating changing climate, Turner says.

With his JELF funding, Turner will obtain drones and GPS systems that he will use to create three-dimensional maps twice each season over several years. These maps will be used with sampled sediment, vegetation and water to document rates of landscape changes and associated influences on the carbon balance and river and lake environments.

“It is important for us to continue development of innovative and integrated approaches to monitor landscape changes and impacts across vast northern regions,” he says. “Findings will improve predictions of how these important landscapes will respond to future climate change.”

Brock’s Interim Vice-President Research Joffre Mercier said it is gratifying for the University to receive funding that is earmarked for the country’s most significant research projects.

“This will enable two of our researchers to make significant contributions to Canada’s health care and environmental conservation efforts,” he said. “We’re all very proud of the exceptional research performed at Brock, and I look forward to seeing the results.”