New President sees a transformative period ahead for Brock University 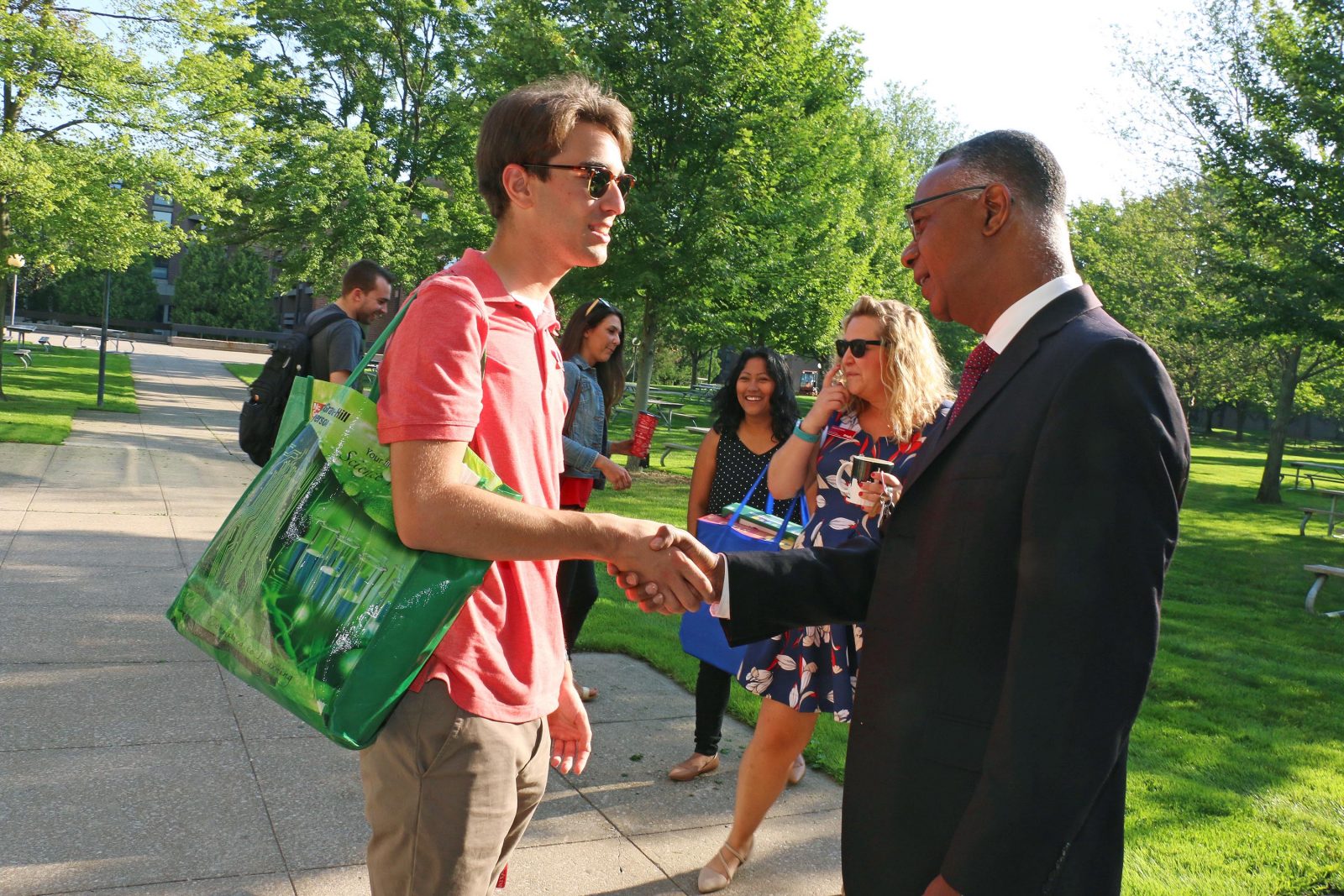 Nicolas Sardella, Leadership and Honours Societies Assistant with Student Life and Community Experience, was greeted by Brock University's new President Gervan Fearon, who stopped to introduce himself to passersby Tuesday morning on his way into the office for his first day on the job.

Dr. Gervan Fearon’s first day as President and Vice-Chancellor of Brock University was about meeting people and getting acquainted with the University community.

“Brock University is about people — students, faculty, staff as well as community members within the region,” he said.

This was reflected by how his day began. Before he got from his car to the door of Schmon Tower, Fearon stopped in the morning sunshine of a courtyard to talk with students and staff from the Brock Student Life office, who beamed at their unexpected encounter. 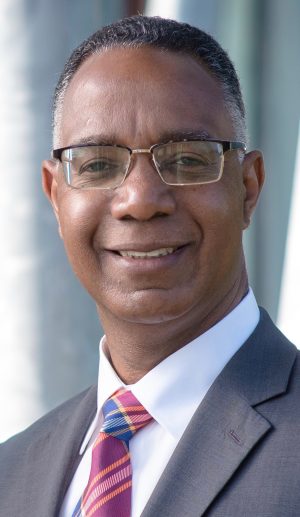 Through the morning there were similar scenes in corridors or Tim Hortons lineups. Then, at midday, he pulled up a chair in Guernsey Market to join a group of science professors gathered for their daily lunchtime scrum. Today’s topic was superconductivity, and Fearon was fascinated to learn about the leading-edge research and innovation taking place at Brock.

Gervan Fearon was on the job, with a forward-looking vision and a sense of anticipation about the next chapter for the University and the Niagara region. He’s aware of Brock’s outstanding academic reputation, as well as its emphasis on being an institution known for contributing to the strengthening and success of surrounding communities and its partners.

“Some of the strengths that distinguish Brock are our faculty and staff, their dedication to teaching and learning; research and innovation; scholarly and creative activities; and student engagement and campus experience,” he said after his lunch hour talks with faculty and staff.

“I’m looking forward to supporting our students and their achievements, as well as working with the Board of Trustees and Senate. I want to build on the successes that have allowed Brock to serve as an important contributor within the Niagara region and across Ontario. This region will play a significant role in the future of the province, and Brock can be a part of the network of institutions and stakeholders assisting to realize these possibilities.”

Fearon arrives at Brock from Brandon University, where he served as President and Vice-Chancellor. Prior to this role, he served as Vice-President Academic and Provost at Brandon; Dean of The G. Raymond Chang School of Continuing Education at Ryerson University; and Associate Dean at York University’s Atkinson Faculty of Liberal & Professional Studies.

He has also served for several years with the Ontario government, including as senior analyst at Treasury Board Division, Ontario Ministry of Finance, and executive assistant to the Deputy Minister at the Ministry of Agriculture, Food and Rural Affairs.

He said Brock University is distinguished for its academic programs and creative activities, such as having one of Canada’s largest co-op programs; housing world-class teaching, research and graduate programs in the sciences, arts and humanities; and having a business school, nursing department and athletic program increasingly being recognized as among the best.

Then, there’s the distinction of being one of a few universities within a UNESCO World Biosphere Reserve.

“The scope for partnerships with Niagara College and other institutions provide significant opportunities for post-secondary education across the region. I look forward to being able to engage with these partners on these possibilities. Additionally, the region is rich with potential for collaboration, as reflected by new developments such as the planned GO train service, the G.E. plant going into Welland and regional health and wellness services.

“I care about the aspirations of individuals within communities across the region, and the promise and hope they see that the University represents and can provide. I believe Brock is that special place where we can do leading-edge research while realizing and recognizing our value to the community.

“It all adds up to a transformative time period for the University, our students and the communities we serve.”